TOH hearing on proposed Franklin Avenue structure set for May 11 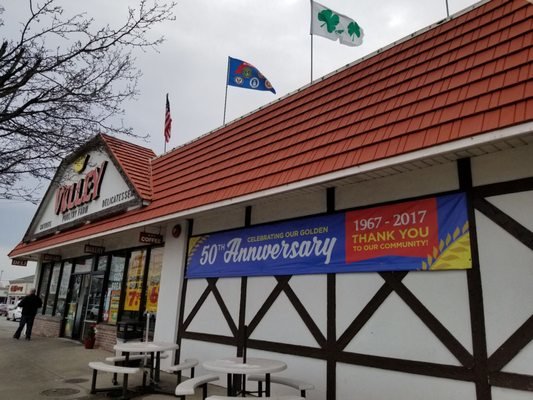 I hope the community stands by with us”
Hank Martensen, co-owner, Valley Caterers
By Robert Traverso

Residents and community leaders have continued to voice strong opposition to a proposed three-story storage facility that would be constructed behind Valley Caterers in Franklin Square, while a representative for the applicant is standing behind its construction.

The Town of Hempstead Board of Zoning Appeals is set to hold a hearing on the proposal on May 11.

The 30-foot-high prospective storage facility would be built behind Valley Caterers, at 600 Franklin Ave., where the vacant former Island Recreational building currently sits. This would require knocking down that building as well as the Consumers Kitchens & Baths building next to it, a business currently operational, and potentially the Rapid Response Medical Care building, which is also operational.

The storage business would not be built on Valley Caterers’ property, but it would sit closer to it than the former Island Recreational building.

The storage facility would disrupt parking for Valley Caterers’ customers, as well as hamper access to the back of the store for garbage removal and for trucks delivering supplies to the store, said Hank Martensen, one of the co-owners of Valley Caterers, which has been operating in Franklin Square since 1957.

The proposed storage facility would be slightly closer to Valley Caterers than the current building and include a curb separating the two properties, making the area too tight for drivers to maneuver, Martensen said.

“A truck wouldn’t be able to get into the back of the building and turn around and get back out again,” he said. “For customers in cars, for that matter, it would be almost impossible.”

In a previous Herald story, Steve Dawideit, the other co-owner of Valley Caterers, said the restriction of access to the building for trucks could cripple his business.

Martensen said he is not absolutely opposed to the construction of a new building behind Valley Caterers but does not support a storage facility being built and added that he agrees with various community members who have expressed a desire for a different business to take the place of the former Island Recreational building.

“I hope the community stands by with us,” Martensen said. “I would hope they would back us up.”

Chris Browne, the attorney for Nauman Hussain, the applicant behind the storage facility, defended its construction and expressed disagreement with the community’s assessment of the situation.

He said the leases on the properties that would need to be demolished for its construction are set to expire. He added that the Rapid Response building could be allowed to remain, with the storage facility possibly being built around the emergency care building.

“We’re not touching the property … we’re not planning to fence the properties off or prevent them from doing what they do now,” Browne said of the potential impact of the storage business on Valley Caterers.
He disagreed with Martensen and Dawideit, arguing that the facility would not impact driving behind Valley Caterers.

“Storage generates so little traffic and parking,” Browne said, calling the facility a “benign use” of the space, and that consumers and trucks would still be able to turn around near the storage facility.

The prospective storage business has been opposed by nearly 700 residents who responded to a survey created by the Franklin Square Civic Association to gauge the community’s opinion.

Browne, who called for tensions over the storage facility to cool, said that the applicant for the storage business does not want its construction to have a negative impact on the community or Valley Caterers.

“We’re not trying to attack these people or do anything to affect their business whatsoever … We’re looking to live in harmony and not have any adverse effect on Valley Caterers or anyone else,” Browne said.

But the opposition of the Franklin Square community to the storage business appears to remain strong.

DelliPizzi rejected offers both Martensen and Browne confirmed have been discussed by the legal representation of both sides about restricting the size of the proposed storage facility.