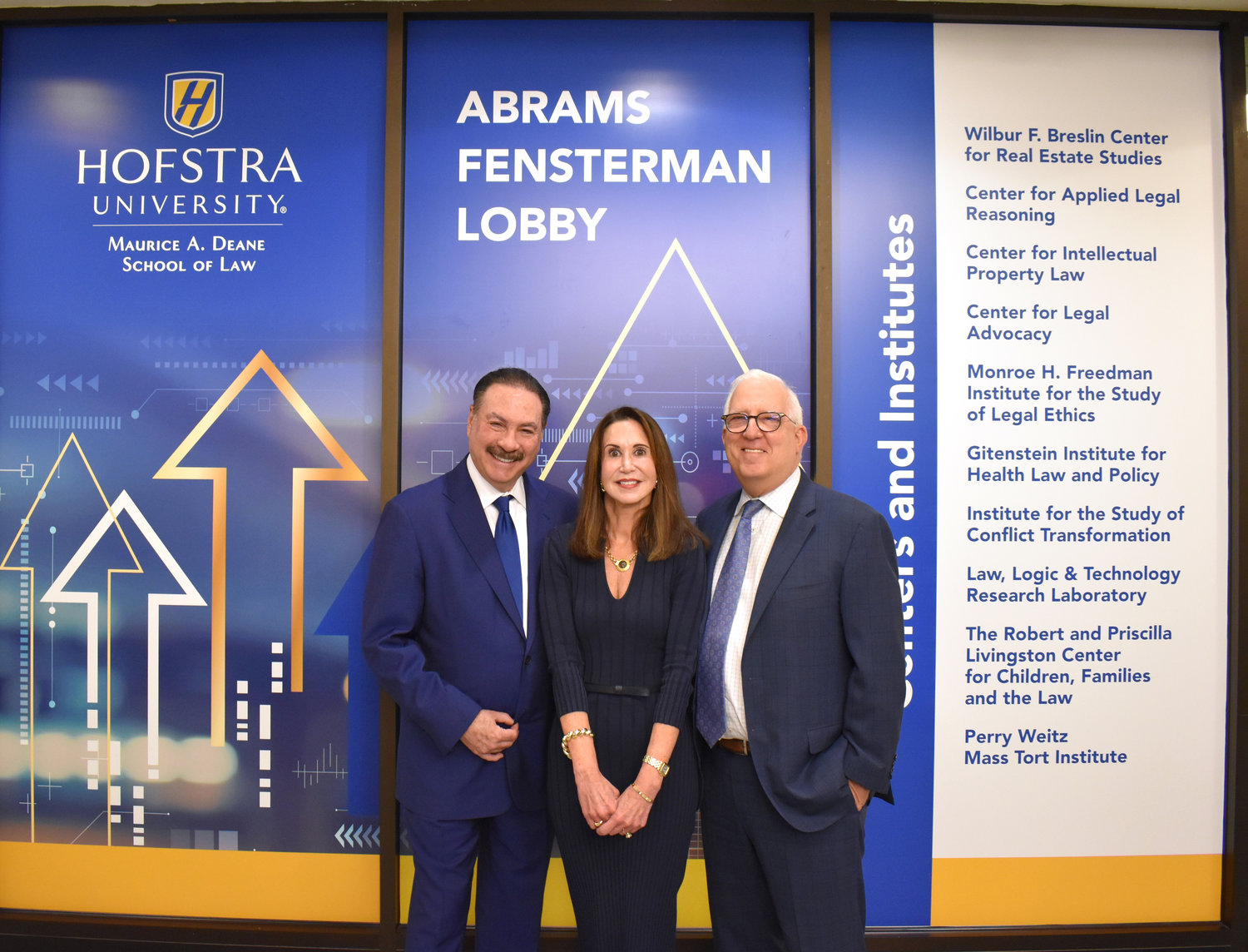 The main entryway into the Maurice A. Deane School of Law at Hofstra University is now known as Abrams Fensterman Lobby after the Lake Success-based firm that has provided money and instruction at the school. Joining in the dedication were, from left, Abrams Fensterman managing partner Howard Fensterman, Hofstra Law dean Gail Prudenti, and Abrams Fensterman executive partner Robert Abrams.
Courtesy Brooke Walker
By Kepherd Daniel

For 16 years, the law firm provided money to support students at Hofstra University’s Maurice A. Deane School of Law. And now the lobby there will be named after the firm.

The dedication of the new Abrams Fensterman Lobby is part of Hofstra Law’s Vision 2020 campaign. Samuel Ferrara, executive partner at the Lake Success-based firm, was a member of the campaign’s leadership board.

“We as a firm are truly honored by this recognition from Hofstra Law,” said Howard Fensterman, the firm’s managing partner, in a release. “We are proudly committed to continuing our support of the law school and their talented and dedicated students.”

The first law school campaign was successfully completed more than 22 years ago — around the same time Abrams Fensterman was founded, and has since raised nearly $22 million, surpassing its initial goals of $12.5 million, and even its “stretch” goal of $17.5 million. The campaign was created as part of the law school’s 50th anniversary.

Funds were raised through alumni, friends, organizations, faculty and staff members. Hofstra also hosted a hall of fame and 50th anniversary celebration that supported the campaign.

Money is used to fund recruitment efforts as well as provide scholarships while expanding cutting-edge programs in areas such as legal technology. Funds were also used to create new interdisciplinary programs within Hofstra’s graduate schools.

The current campaign has been underway the last four years and has been credited with increasing support to more than 200 named scholarships and fellowships. That includes the Dean’s Legal Tech Fellowship Program for law and engineering students to work on artificial intelligence projects within the school’s research lab while adding five new legal tech courses to the curriculum.

The campaign also supported faculty scholarship and hiring, and adapted to virtual and hybrid teaching during the coronavirus pandemic with upgraded “lecture capture” technology in newly modernized classrooms with a new student lounge and public event spaces.

The firm was founded in 2000 and has offices in Brooklyn, White Plains, Albany and Rochester.

The Abrams Fensterman Lobby is a multifunction space where students study, collaborate, and gather for law school receptions and community-focused events.

“We are grateful for visionaries like Howard Fensterman, and everyone at Abrams Fensterman for their investment in Hofstra Law and their commitment to mentoring, training and hiring our students,” said Gail Prudenti, dean of Hofstra Law, in a release. “Their support ensures these efforts will continue to grow far into the future.”