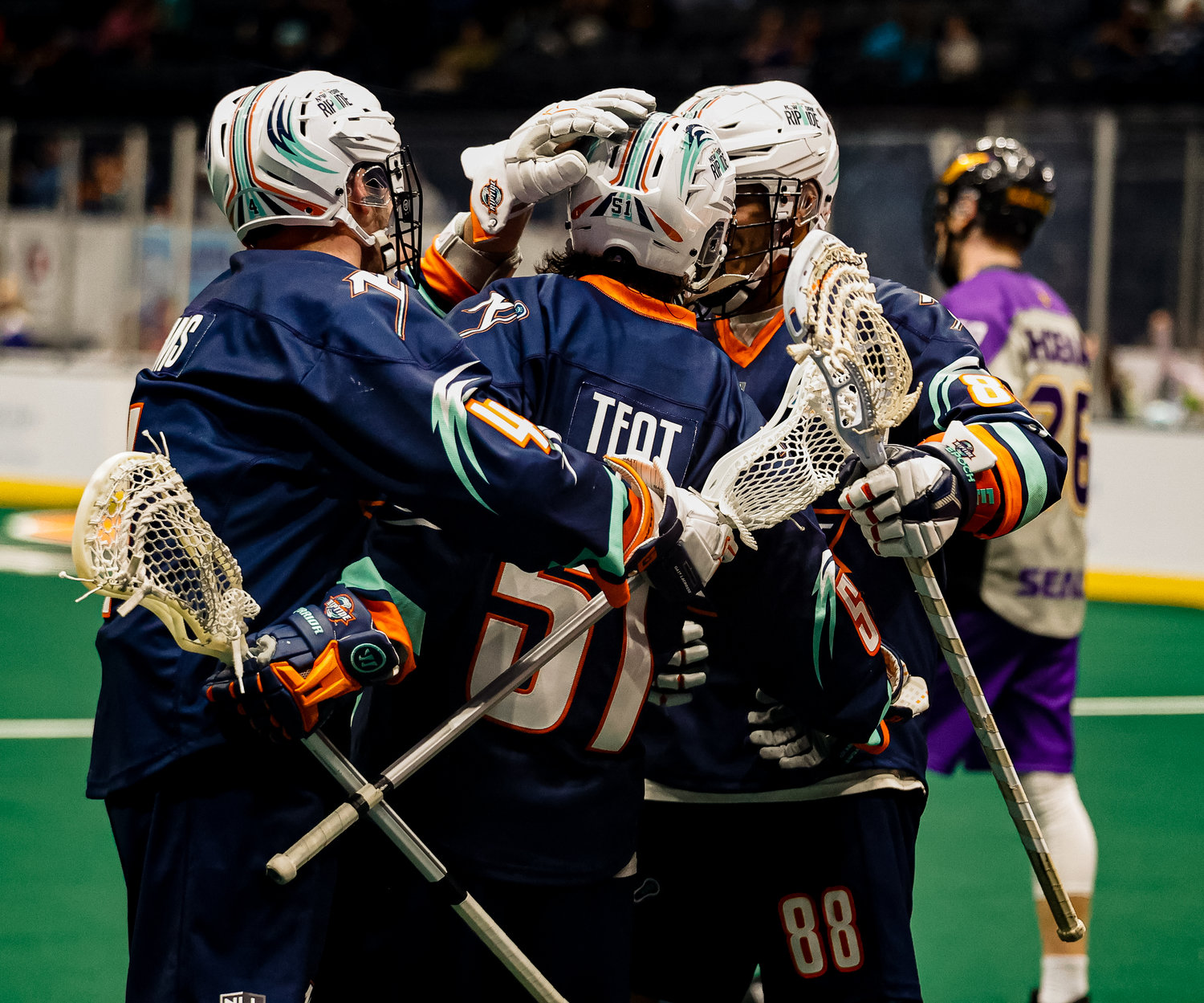 It was a frantic and controversial finish to the New York Riptide’s 2022-23 National Lacrosse League opener Saturday night at Nassau Coliseum.

Trailing throughout the second half against visiting San Diego and by as many as six goals in the fourth quarter, the Riptide staged a furious rally that fell excruciatingly short in a 15-14 defeat to the Seals.

The Riptide believed it had the equalizer off the stick of Jeff Teat with 6.2 seconds remaining. Teat fired a rebound shot off the post of a dislodged net that landed on the chest — and over the goal line — of fallen San Diego goaltender Frank Scigliano. But after a lengthy video review the play was ruled “no goal,” and the Seals burned the rest of the clock to escape with the win.

“There are so many positive takeaways,” Riptide head coach Dan Ladouceur said. “I thought Orle [goalie Steve Orleman] was good. In the fourth we got production from our D as well as our O.

“And just the sheer character,” he added. “Anybody could’ve looked at that score in the fourth and said ‘well, this is it.’ But that wasn’t the character that was displayed.”

New York’s veteran leader and one of its captains, Callum Crawford, left the game early with a lower body injury. No immediate update was provided on Crawford, who last season became the eighth player in NLL history with 700 goals and just the 10th with 1,100 points.

The Riptide was already without key defenders Dan MacRae, Leo Stouros and Brent Noseworthy. All three are on injured reserve.

New York led 5-3 in the second quarter before the Seals notched five of the next six goals to pull ahead 8-6 at halftime.

“At the half, the message was we knew we had to put together 60 minutes to even have a chance of winning this game,” Ladouceur said. “Given our lineup situation and the absolute powerhouse they are offensively, we were kind of where we wanted to be. We wanted to stay tight and then make our push.”

In the third quarter, Dan Lomas scored to bring the Riptide back within one, but the Seals would counter with three straight tallies to lead 11-7 heading into the fourth.

“Small battles we weren’t winning,” Ladouceur said of the third quarter. “Our offense had great opportunities and not great production.”

It wasn’t looking the least bit promising for Ladouceur’s team when San Diego scored the first two goals of the fourth for a 13-7 cushion. It was 15-10 with four minutes left when New York rallied with four straight power play goals from Andrew Borgatti, Jake Fox, and a pair from Kearnan.

But the hosts couldn’t complete the comeback.

The Riptide have a bye before facing the Halifax Thunderbirds on Saturday, Dec. 17 at 7:30 p.m. Five of New York’s first six games are at Nassau Coliseum.

“We just talked about getting better and coming back with a better version of us,” Ladouceur said.

Colby Siergiej provides a safe space for teens at BOCES