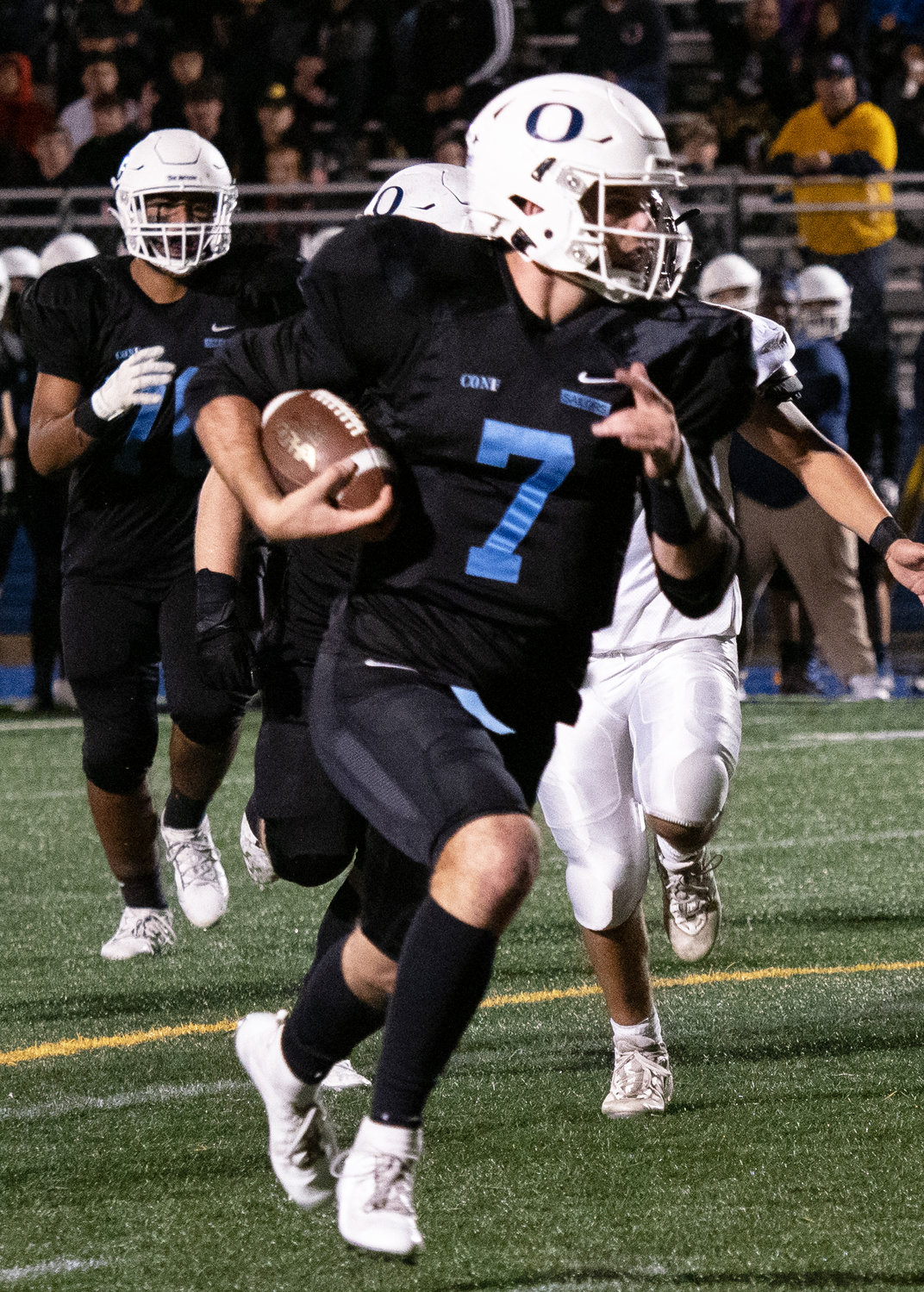 Oceanside won its Nassau Conference I football semifinal playoff against Syosset in convincing fashion last Friday, as the Sailors steamrolled the Braves 61-33 at Hofstra.
With the win, the Sailors solidified a spot in the county championship game Friday at 7:30 p.m. against Massapequa, in a rematch of last spring’s final won by the Chiefs.
Oceanside head coach Rob Blount was impressed with how well his offense was able to perform against Syosset. “I thought that the offense did really well,” Blount said. “We got stopped the first series, and from there we got everyone going. It was nice to see.”
After their first drive in which the offense went three and out, the Sailors were essentially flawless on the offensive side of the ball, as they found their rhythm and registered touchdowns on each of their next 9 drives. The team did a fantastic job of diversifying its play calls, as the rushing and passing attacks were equally potent. The Sailors finished the game with 564 yards of total offense, with 214 yards coming from passing and 350 yards coming from rushing.
Senior quarterback Charlie McKee was the central catalyst for this dominant performance, as he succeeded both rushing and passing. He finished with 182 passing yards and a touchdown, and also had a staggering 193 rushing and 5 rushing touchdowns. He also converted a fourth down on a designed fake punt, as he lined up at punter and took the direct snap and ran for 21 yards and an easy first down. Blount was elated with how the Stony Brook commit delivered in this elimination game.


“Charlie is just that guy,” Blount said. “He’s essentially a running back that throws very well. We have to get the ball in his hands as much as we can, and he did a great job.
Running back Cole Parker was the perfect complement in the ground game, as he finished with 145 rushing yards and 2 touchdowns on only 8 carries.
Oceanside’s receivers stepped up to the stage admirably as well, as 6 different Sailors had receptions. Ronnie Kraemer had 62 yards on 4 receptions and a receiving touchdown, and also had a passing touchdown, as he took an end-around rush on a designed trick play and threw a roaming 32-yard dart to Logan Lyson in the back of the end zone. Lyson fished with 73 receiving yards, which was the most on the team. Michael Mecca, Nick Ebel, Xavier Miller and Jake Perinchief all played their parts well, as they combined for another 79 receiving yards.
While conceding 33 points isn’t something that defensive units should typically strive to do, Oceanside’s defense was still able to generate big plays and hold the lead. The unit had 7 tackles for loss throughout the game, and also had 4 sacks. Jack Hickam had a huge third down sack on a designed blitz, and Joey Broderick also was able to provide consistent pressure, as he had 1.5 sacks. Peter Stalatare and Logan Lyson also registered sacks.