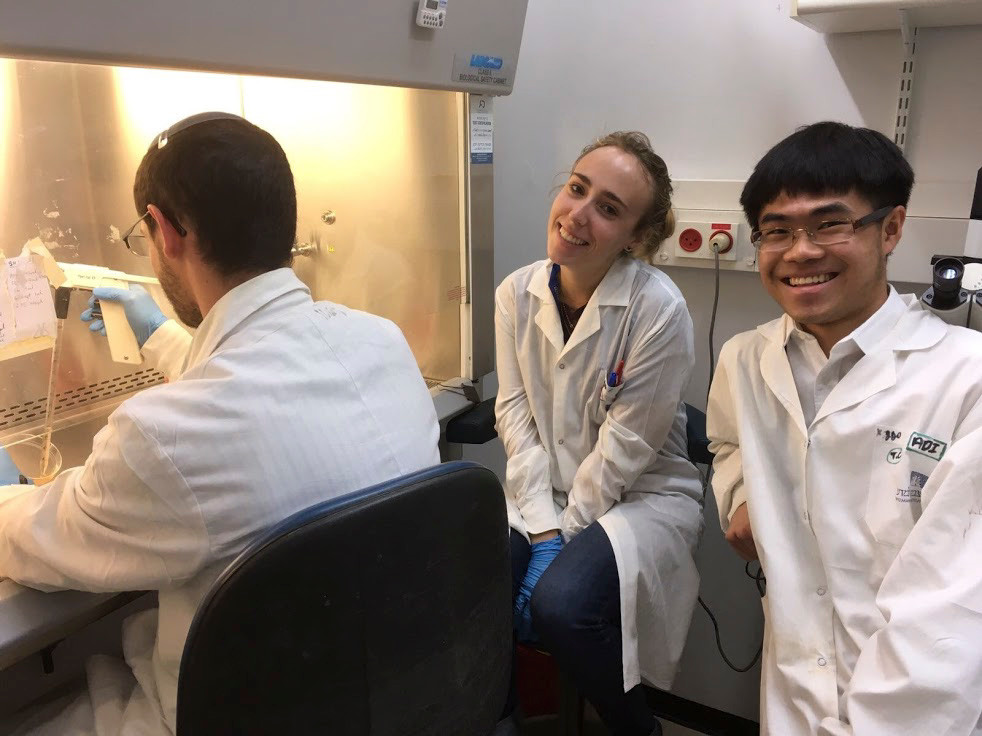 Weizmann Institute mentor David Bassan, with his back to the camera, split T-cells in the laboratory with student lab partners Tzippora Chwat, center, and Yee Kwan Lee.
Courtesy Tzippora Chwat 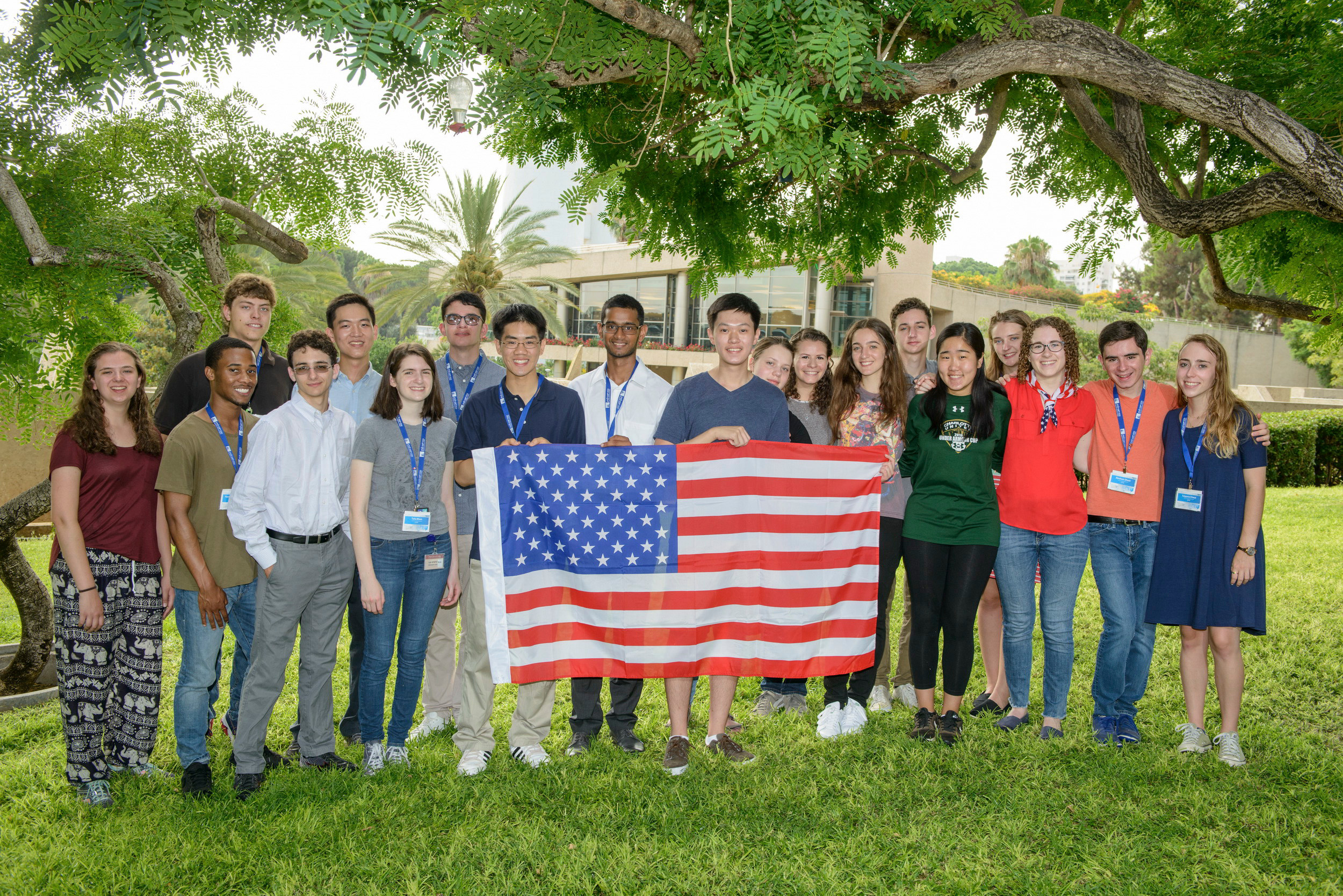 Dissecting worms to understand how they regenerate was Tzippora Chwat’s first science project in middle school. The Cedarhurst resident found the flatworms she had to work with disgusting.

“When we got the planaria” — a variety of flatworm — “it was grossing me out,” Chwat said. “My mom said, ‘Calm down.’ She always knows how to help me.” Lara Chwat, a tax attorney, also reviews her daughter’s science papers.

Thanks in part to that parental support, Chwat, 19, is making the most of her interest in science. She is a graduate of Yeshiva University High School for Girls, and was one of 19 American students chosen to take part in research as part of the Dr. Bessie F. Lawrence International Summer Science Institute at the prestigious Weizmann Institute of Science in Rehovot, Israel.

The program offers merit-based scholarships, and participants work with renowned scientists in biology, chemistry, computer science and mathematics. A total of 79 students from around the world took part this year.

“By giving these students the opportunity to work at one of the world’s top multidisciplinary research centers, the program inspires them to pursue science in college and beyond,” said Elaine Yaniv, who was recently appointed the Weizmann Institute’s national vice president in the U.S., and who has served as executive director of its New York State Tri-Region for seven years.

Encouraged by her high school biology teacher, Ruth Fried, to apply for the program, Chwat was interested, because she had conducted summer research in Stony Brook’s Garcia Program in 2015. “I was really, really excited that I was accepted,” she said.

Working in Weizmann’s Department of Immunology, she was teamed with mentor David Bassan, a Ph.D. candidate in tumor immunotherapy, and lab partner Yee Kwan Lee, who lives in Hong Kong and was part of a team from the United Kingdom. Together they researched how to make T-cell receptors more effective in the treatment of melanoma, a form of skin cancer.

Chwat also focused on improving her collaborative skills, especially with people from other parts of the world. “I definitely learned that I need to work on my ability to talk with others and understand different writing styles,” she said.
There is also a cultural component of the Weizmann program, which includes trips around Israel on weekends.

And the students get to know one another by living together in a youth village at the institute which resembles a college campus, said Chwat, who is now a freshman at Macaulay Honors College, part of the City University of New York system.

“International Summer Science Institute alums have described the experience as life-changing,” said Marshall Levin, chief executive officer of the Weizmann Institute’s American Committee for nine years. “Many participants go on to study science in college, and to launch exciting careers in science, medicine, technology and other STEM-related fields.” STEM is an acronym for science, technology, engineering and mathematics.

Levin underscored the institute’s impact through its recent discoveries, including research that led to the development of two primary treatments for multiple sclerosis and a breakthrough in noninvasive treatment for prostate cancer.
Research, possibly in pharmaceuticals, is what interests Chwat.

Regenerative medicine caught her attention, she said, because her father, Jeremy, is the executive director of American Friends of NATAL, an organization that helps wounded members of Israel’s armed forces.

According to statistics from the National Girls Collaborative Project, a group that encourages girls to pursue STEM careers, women receive more than half of bachelor’s degrees in the biological sciences in the U.S., but they receive far fewer in math (43.1 percent), the physical sciences (39 percent), engineering (19.3 percent) and the computer sciences (17.9 percent).

“I’ve always been interested in amazing science programs targeting girls, and that has to keep happening,” said Chwat, who plans to major in biology and minor in English. “Exposure to STEM at a younger age is needed.”

Yaniv said that the institute recognizes that women are under-represented in the sciences. She noted that Weizmann’s Davidson Institute of Science Education, offers many programs for schoolchildren and “strongly encourages girls to participate.”

“[There are] several initiatives to encourage young, female scientists to stay the course once they reach the graduate and postdoctoral level,” said Yaniv, including master’s and doctoral scholarships and the Israel National Postdoctoral Award for Advancing Women in Science. The award is given to outstanding women Ph.D.s who are accepted by prestigious postdoctoral programs outside Israel.

For more information on the Weizmann Institute of Science, go to www.weizmann.ac.il.