Cleaning up the Peninsula Boulevard plume 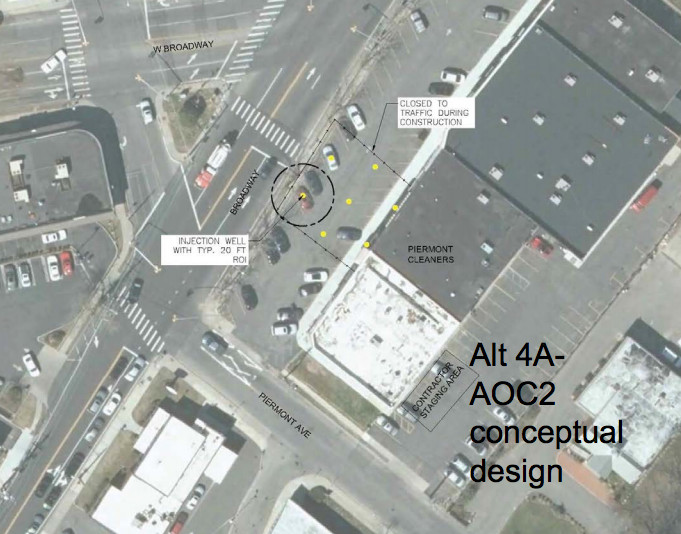 One of the two areas in Hewlett that will be remediated by the Environmental Protection Agency in phase two up of the cleanup.
Courtesy EPA
By Tyler Marko

Environmental Protection Agency officials at a public meeting at the Hewlett firehouse on June 22 offered two plans considered the best options for cleanup of the Peninsula Boulevard Plume. Officials also discussed the results of testing of the contaminated soil and groundwater near Woodmere Middle School, answered questions and collected public comments.
There are two main areas of concern, EPA officials said. One stretches from Cedarwood Dry Cleaners across West Broadway into the lot across from Hewlett Parkway. Clean up of this area is pegged at $21.5 million. The other includes Piermont Dry Cleaners and other parts of the shopping center on Broadway, where it is located. The projected cost is nearly $6 million. Both would take between six months and a year to complete.
Project Manager, Gloria Sosa, said the federal agency EPA found that these two locations had abnormally high levels of the carcinogenic chemicals tetrachloroethylene (PCE) and trichloroethylene (TCE). Both are dangerous if consumed, but luckily the contaminated groundwater is located at more shallow depth and separated from the drinking well by layers of sand and clay. The study was concluded in May.
The chemicals were generated by improper dry cleaning systems, which had been repaired long ago, but had allowed the chemicals to leech into the water before the hazards were known. The contamination was discovered in 1991 and the site has been on the EPA’s national priorities list since 2004.
EPA officials take several factors into account before recommending a course of action, these include the method’s long-term effectiveness, how it can be implemented, the cost and the community’s opinion, Sosa said.


The recommend course of action is bioremediation where harmless microorganisms such as whey, lactate and emulsified vegetable oil are injected and used to break down the PCE and TCE into non-toxic compounds. A series of vapor extraction wells will then take the gasses to the surface where they can be disposed of safely, officials said.
To pay for the work, the EPA will use superfund money as well as seek restitution from the responsible parties. Officials said that time, if they businesses are still operating and determining who is exactly at fault makes that difficult
Sosa projects that the actual work will not begin until 2019. She said that the remedial design of something this complex typically takes between 18 and 24 months.
David Friedman, president of the Hewlett Woodmere Business Associate expressed his desire for another meeting to be held to discuss the issues more in-depth before they go forward. “We wanted to have more residents, as well as school officials,” he said. “Dr. [Ralph] Marino (Hewlett-Woodmere superintendent) said they were unaware of this meeting until Monday afternoon and everyone is at the high school graduation.”
Sosa said that they had been reaching out to the schools’ principals for over a month but had never heard back, and that they would have held this meeting on another night had they known about the graduation.
Some residents were concerned with potential road closings and whether or not their property would be affected. Daniel Sheinin was worried about his property’s value. “Now with all this testing going on in the area, if I were to sell my house is this going to be a red flag that you guys are doing all this work in this area?” he asked. Sosa said that in her experience property values have taken a hit based on their proximity to other superfund sites.
She urged residents to send comments to her at either: Gloria M. Sosa, Remedial Project Manager, Western New York Remediation Section, U.S. Environmental Protection Agency, 290 Broadway, 20th floor, New York, NY 100007-1866 or at sosa.gloria@epa.gov.
The entire plan and presentation is available online at epa.gov/superfund/peninsula-groundwater. Copies are also at the Hewlett-Woodmere Public Library.
Report an inappropriate comment