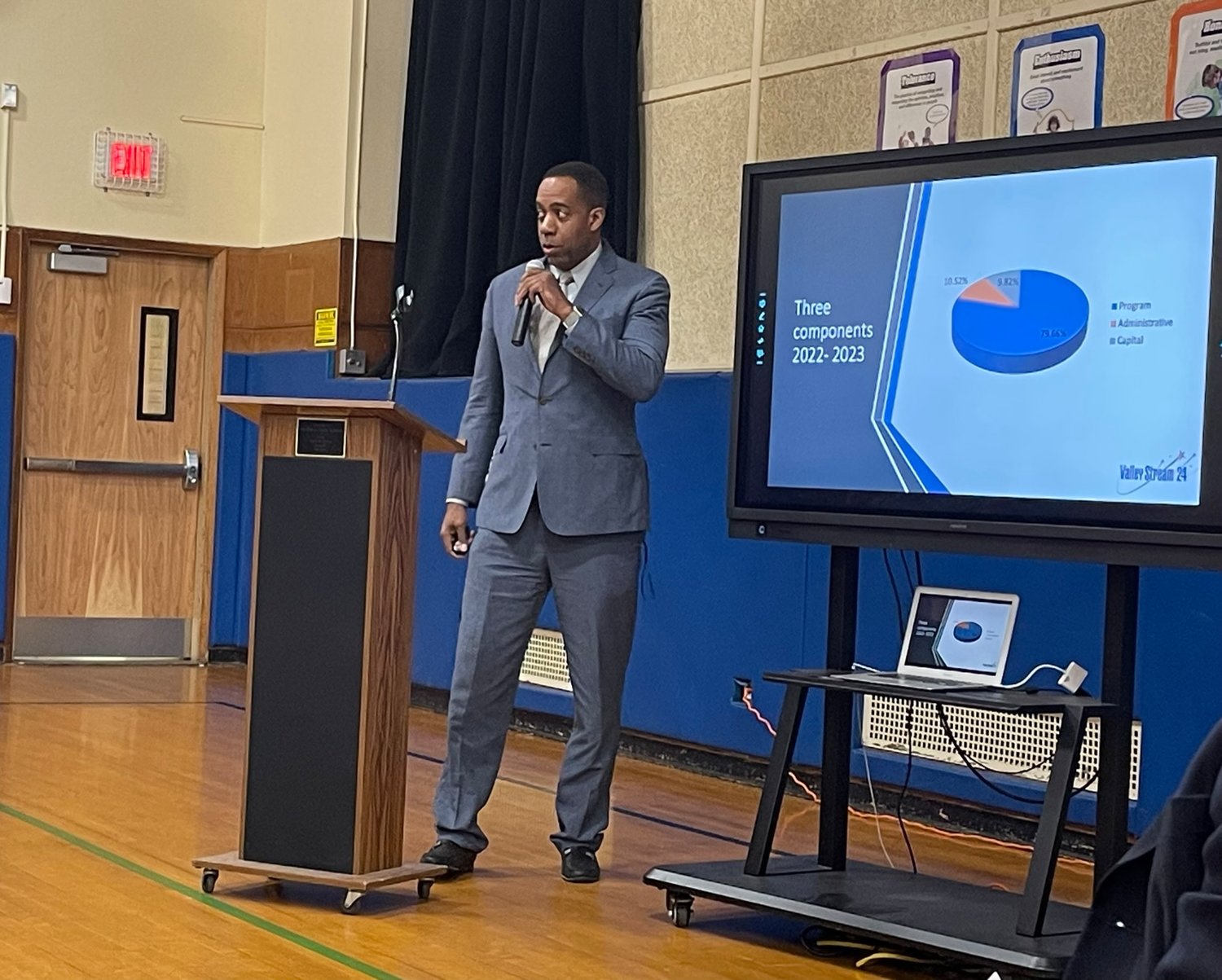 school (this is usually the school your child or your neighbor’s child attends).

If you have any questions, contact the district clerk at jbiscardi@vs24.org.

Valley Stream Union Free School District 24 administrators presented their 2022-23 spending plan at a Board of Education budget hearing last week before a small crowd composed almost entirely of school administrators and board trustees.

The proposed budget totals approximately $34 million, and has a tax levy of roughly $22.3 million, 1.5 percent larger than the total taxes in the current spending plan. The increase falls below the district’s state-mandated 2 percent tax cap, as well as Nassau County school districts’ average tax levy increase of 1.76 percent.

District spending is slated to expand by around $2.2 million, or 6.89 percent, with the largest increase — $1.2 million — in educational instruction. The next-largest is labeled “undistributed,” and includes capital transfers for building improvements, maintenance and renovations as well as employee benefits.

The district will receive an additional $1.8 million in state aid, for a total of $10.5 million, the biggest revenue source after property taxes.

“We maintain all instructional programs and initiatives without any staff reductions in this budget,” Jack R. Mitchell, assistant superintendent for business, said. “We also have a collaborative, consultative approach within this budget. We demonstrate the efficiency of resources and sharing of services through the consolidation of programs. And last but not least, we’re fiscally responsible.”

At the hearing, resident Janet Hamilton, standing alone amid a group of administrators, asked what made the budget process “collaborative,” and who the collaborators were. Mitchell listed the district superintendent, the assistant superintendent for curriculum and the directors of special education, facilities, instruction and technology as well as himself. “Once we start looking at different areas of the budget,” Mitchell said, “we then interject with our principals, and then we gain further input from the staff as well as the community. And then it is also extrapolated to the board, of which we go through different iterations of the budget to see exactly how to prioritize services and then come to the conclusion of what makes sense to put in the budget.”

No cuts would be made to school programs or services in the proposed plan. In a slideshow presentation, a slide with the heading “Highlights and Points of Pride” listed new and continuing programs that would be funded. They ran the gamut from programs long advocated by parents, including universal pre-K and full-day kindergarten programs to newer initiatives like the Diversity, Equity, Inclusion Initiative and a “robust social media platform.”

Hamilton asked about the aim of the Diversity, Equity, Inclusion Initiative, which was created in mid-December of 2020. “It’s looking at the diversity of our community and celebrating that and valuing that,” Superintendent Dr. Don Sturz said. “It’s looking at equitable access for all and how can we be more inclusive, meaning what can we do to have more people involved, and more people engaged? That’s the promise.”

Sturz added, “We used a cultural response rubric, and review our curriculum to make sure it is culturally responsive. When we look at the way in which we put communication out, we have our website able to be translated to a large number of languages.”

The main impetus for the initiative was parents and residents who expressed concerns about diversity in a majority-minority district with a teaching staff that is still mostly white, despite efforts to recruit more people of color.

The budget would also fund a reinstituted Spanish program for grades five and six that was previously cut due to fiscal constraints. It would prepare students for secondary-level Spanish classes, according to school officials.

The school budget vote is May 17.

Have an opnion about this article? Please send an email to jlasso@liherald.com.