Five Towners to be honored by the Jewish Sports Heritage Association 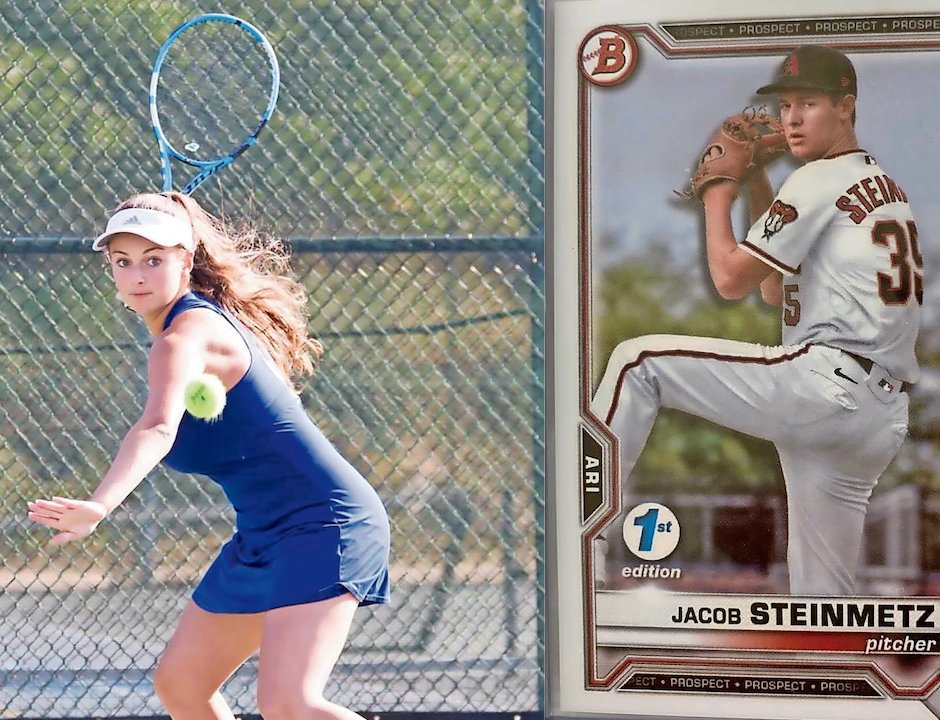 For the first time in three years, the Jewish Sports Heritage Association’s induction and awards ceremony will be held in person, and a pair of youthful Five Towners will receive the Mitchell Freedman Outstanding Jewish High School Athlete of the Year Award. It is the fourth annual event.

At the May 1 ceremony, Hewlett High School graduate Rachel Arbitman, now a Harvard freshman, will be honored for her success in tennis, along with Woodmere resident Jacob Steinmetz, the first Orthodox Jew ever drafted by a major league baseball team. He is currently pitching in rookie ball in Arizona for the Diamondbacks organization.

The ceremony is free, and will take place at Temple Israel of Lawrence beginning at 10:30 a.m. It will also be held on Zoom. There will be 10 inductees into the association, representing eight sports, sportswriting and sports administration.

“By highlighting Jewish athletes from across the sports world, it hopefully offers a starting point for discussions of stereotypes and prejudice,” said Alan Freedman, who founded the Great Neck-based organization in 2015. “‘Jews in sports’ is thought to be an oxymoron, and in showing the fallacy of that assumption it causes us to question stereotypes that we have about diverse groups.”

Arbitman, 19, whose list of achievements as a scholastic tennis player is long, is expected to attend, while Steinmetz will appear via a video.

“I think this is an incredible honor, and especially with all the craziness, I was so thankful that I got to play my senior season,” Arbitman said, referring to the coronavirus pandemic. “I really loved playing tennis for my school and representing them. It was incredible.”

“First of all, Rachel is very talented and an all-around great leader,” said her coach at Hewlett High, Abby Samlin, adding that Arbitman’s talent was “far above the level of everyone,” yet at the same time she encouraged her teammates and acted as a second coach, Samlin said.

So much so that a special Hewlett High award was created to honor Arbitman, given to an athlete who plays multiple sports. “She is a coach’s dream, Samlin said.

Last July, Steinmetz, 18, was chosen in the third round of the Major League Baseball draft. He played for the Hebrew Academy of the Five Towns and Rockaway High School team, but when his last season of high school ball was canceled because of the pandemic, Steinmetz spent last spring at the Elev8 Academy, a training facility for high-caliber scholastic baseball players in Delray Beach, Florida.

Since being drafted, the right-handed pitcher has worked on increasing the velocity of his fastball, which has hit 97 mph, and a crackling curve ball. A promotion to Single-A ball could be on the horizon.

“It’s an honor to be recognized with Rachel Arbitman for this award,” Steinmetz wrote in a text. “I appreciate the work the Jewish Sports Heritage Association does to give exposure to Jewish athletes like me who are working hard to chase dreams.” He credited the Diamondbacks with making his transition to professional baseball a seamless one.

Of the nine inductees and other honorees, Ira Berkow, Yuri Foreman, Sada Jacobson, Dr. David Margolis and Renee Richards are expected to attend in. Elliot Steinmetz, Jacobs’s father and the coach of the Yeshiva University men’s basketball team, will attend and accept the award for Jacob.

Margolis is the recipient of the association’s Dr. Bruno Lambert Good Guy in Sports Award. He practices at Children’s Wisconsin hospital. Lindsey Ruderman, a diver at Amherst College, and Daniel Cukierman, who plays tennis at USC, are the Jay Fiedler Outstanding Jewish College Athletes of the Year.

“By giving the high school award to Rachel and Jacob, it shows a couple of things,” Freedman said. “That the Jewish athletes being honored aren’t just those from the past. Jewish men and women are doing great things in sports today.”

For the Zoom online videoconferencing link, send an email to ahfreedman142@aol.com.