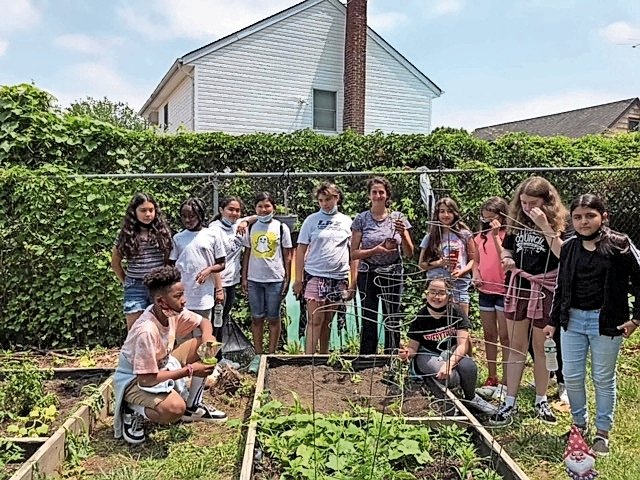 Five Towns teenagers came together to help out at the Community Center garden.
Courtesy Sasha Young
By Kepherd Daniel

With the summer ending, the Five Towns Community Center garden is gearing up for the harvesting season. The garden was revitalized in 2018 after the start of Gammy’s Pantry, a food pantry in the Community Center in Lawrence that has helped those in need of food.

Pantry founder Sasha Young, an Inwood resident, along with her twin daughters Alexandra and Alexis Acosta, created the pantry two years ago, after her grandmother Betty Young, whom she called Gammy, died on Christmas in 2018.

Girl Scout troop 720, which the daughters belong to, thought of creating a butterfly garden outside the community center in honor of Betty Young. The Girl Scouts started the butterfly garden with plants that would draw bees.

Now at the end of the growing season, the garden is set to harvest cucumbers, peppers, and tomatoes. This year the garden tried growing cilantro, basil, and different kinds of Italian herbs as well as different types of peppers and seasonings for South American cooking. “The idea that we put forward was to grow fruits and vegetables that were more culturally based for people that live in our community,” Sasha said.

Girl Scout Troop 720 along with Gammy’s Pantry volunteers have helped out with the garden and an emphasis has been placed on getting a wide age range of volunteers.

“We have about six seniors that are helping and then they give direction to the teens that are out there,” Sasha said. “The seniors give the old school advice. Our youngest volunteer is three and our oldest volunteer is 92. We try to blend the generations and help them teach each other.”

Maria Rosa Guzzardi is one of the senior volunteers at the garden and has volunteered for more than five years. Guzzardi noted the importance of teaching the younger generations the tricks of gardening. “People, especially the young generation thinks food just comes instantly,” she said. “They forget about taking care of the seeds and the planting. The stuff we make in the garden makes a big difference.”

The garden is looking to expand with a pumpkin patch that will start soon for the fall festival. “We're going to start with our pumpkins, and next year, we're going to open those boxes up to community members to make cultural boxes,” Young said.

The garden has been a great asset to many in the Five Towns. The old generation teaching the young generations is very important. “It's what family does,” Guzzardi said. “For me it’s a family.”

“It’s all about cooperation and people being able to spend time together and build back relationships after Covid,” Young said. “We're kind of in a food desert right as our local grocery store closed over a year ago (Stop & Shop in Inwood) and families are forced to make a long trek up Rockaway Turnpike, which if you have small children is not even possible.”

“Most of the families we serve are financially struggling and the cost of food has gone up exponentially,” Young added. “Us being able to grow some things here may soften the financial burden, as well as give them a little taste of, back home.”