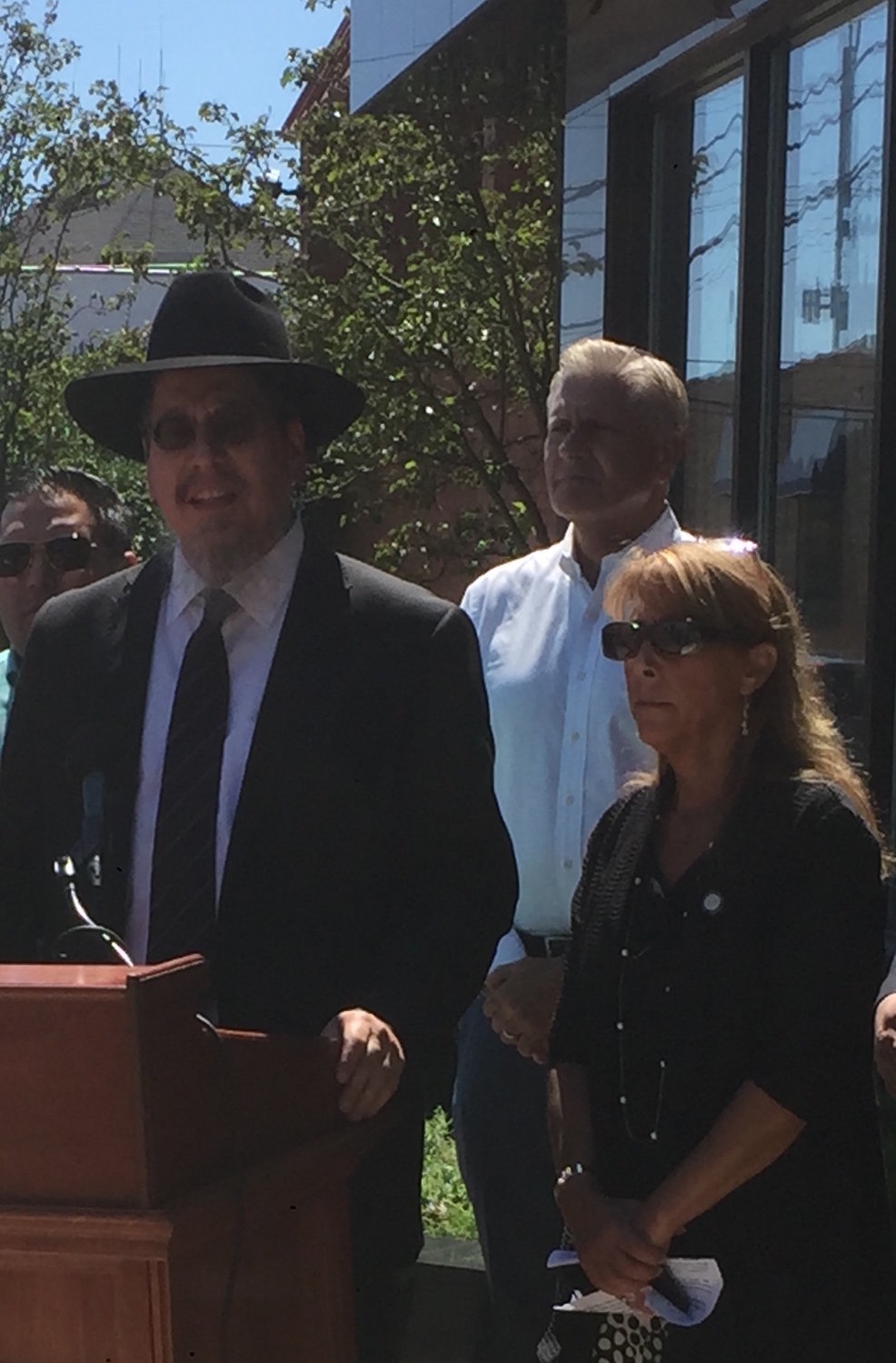 Mesivta Ateres Yaakov High School Head of School, Rabbi Mordechai Yaffe, center, said his school does not need oversight from the state on how to educate its students. To his left was State Assemblywoman Melissa Miller and in the back Councilman Bruce Blakeman.
Matthew Ferremi/Herald
By Matthew Ferremi

Originally unveiled in November when SED Commissioner MaryEllen Elia called for all New York state private schools to offer a total of 36 hours of instruction per week in English, math, science and social studies. The schools must also provide sample lesson plans; lists of textbooks; samples of daily, weekly, monthly and yearly schedules.

Failure to do so could result in the loss of state funding for textbooks, transportation and other items.

Town Councilman Bruce Blakeman finds the SED’s proposal to be offensive. “This is an attack on religious freedom and an attack on school choice,” he said. “It is trying to take away parents ability to make choices on what they think is the best education for children.”

Councilman Anthony D’Esposito gave an example of how he thinks the initiative would be detrimental to private school such as 70-year-old Sacred Heart Academy in Hempstead, which he considers “a renowned all-girls institution.” “If this initiative moves forward, Sacred Heart would then be in the hands of the Hempstead School District,” he said. “A district that’s been plagued with trouble and reprimanded by the state in the past.”

MAY Head of School, Rabbi Mordechai Yaffe said that his school wants to educate their students how they choose. “We share a wonderful relationship with our school district (Lawrence), but that doesn’t mean we want to them to tell us how to educate our children,” he said. “We have students who have almost a 100 percent acceptance rate to college. What do we need oversight for?”

MAY’s Executive Director, Rabbi Yirmiyahu Lasker appreciated the support from local representatives and noted the school’s regents test scores as an example of their success in educating students. “I think our school does a great job of preparing our students for college and eventually the real world,” Lasker said. “Last year, a report came out that said we had a higher average scores on our regents exams than the public schools in the county did.”

Lasker referred to MAY’s 83.2 average on the physics regents exam in 2018, higher than the county’s public school average of 77.5. Other Five Towns private schools such as Midreshet Shalhevet High School, in North Woodmere, and Stella K. Abraham High School for Girls, in Hewlett Bay Park, averaged English Language Arts Regents exam scores of 90.2 and 86.9 in 2018, respectively, while public schools averaged just 61.8. Regents results for 2019 have yet to be released.

Yaffe said it is not about money. “We have no problem paying the same amount of taxes,” he said. “We are not asking for anything financially. We just want the fairness to be able to educate our children to be productive members of society.”

Town of Hempstead Supervisor Laura Gillen, a Democrat, sent a letter to the SED on Aug. 29. “As an alumna of Sacred Heart Academy, a mother of a Chaminade High School student (as well as a mother of public school students) and the supervisor of the Town of Hempstead who represents many constituents who choose to send their children to private and/or religious schools, I urge the state the rethink this proposal,” Gillen wrote. “It could have potentially undesirable and serious consequences for many students, parents, teachers and staff.”

Family fun time at the Kulanu Fair in Cedarhurst