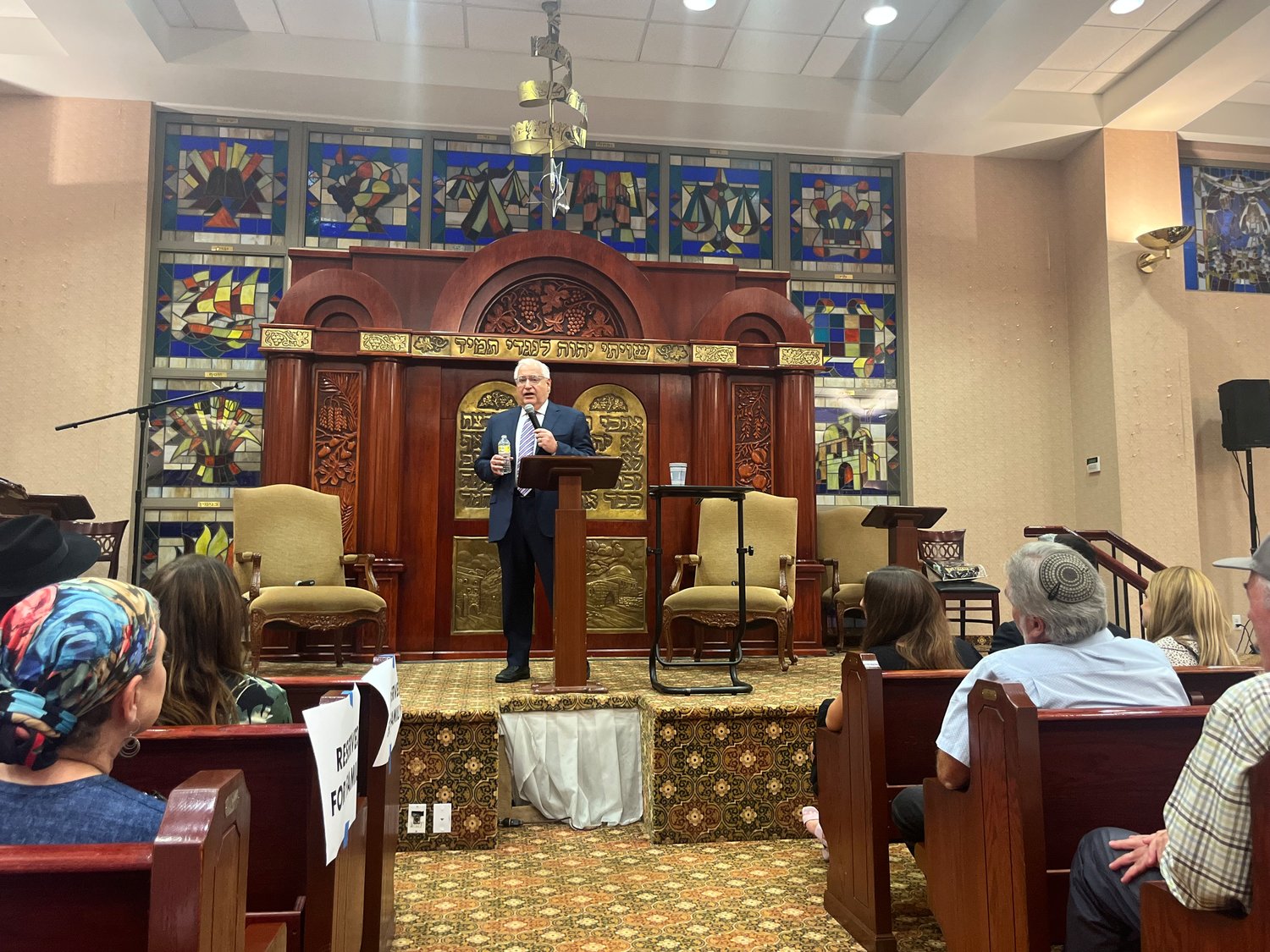 David Friedman, a former U.S. ambassador to Israel, spoke at Young Israel of Lawrence-Cedarhurst about his book, ‘Sledgehammer,’ on Aug. 1.
Lisa Margaria/Herald
By Lisa Margaria

Lifelong Five Towns resident David Friedman, the former United States ambassador to Israel under President Trump, attracted a crowd at Young Israel of Lawrence-Cedarhurst during a book-signing event for “Sledgehammer: How Breaking with the Past Brought Peace to the Middle East” on Aug. 1.

Friedman and his wife, Tammy, who joined him at the event, were once full-time Woodsburgh residents with a deep history of Jewish involvement in the Five Towns. Friedman’s father was Rabbi Morris Friedman, an iconic figure in the Jewish community who was one of the founders of the modern Orthodox movement and was the spiritual leader at Temple Hillel in North Woodmere. The Friedmans now split time between Florida and Jerusalem, and visit the Five Towns often.

Rabbi Ya’akov Trump (no relation to the former president) opened the event, welcoming Tammy to speak first. “November 8, 2016 was a day that would change our lives forever,” Tammy said, as that was the day that Donald Trump was elected to serve his first term as President. “Donald Trump had reassured David that he would be his first choice as ambassador, should he become president.” The Friedman family moved to Israel on May 14, 2017.

“It was like a great adventure movie,” Tammy said. “Lots of twists. And many turns. So many great stories left untold. Maybe I will write the next book with him and tell a more personal story. There's so much I can tell you, but we're limited in our time.”

Friedman shared tidbits of his experiences — pieces of what he wrote in his book, Sledgehammer, published in February — as a diplomat and how the Abraham Accords Declaration, which maintain peace between the U.S., Israel and the United Arab Emirates, came about.

While serving as the envoy to Israel, David’s no-nonsense style helped broker the recognition of Jerusalem as capital of Israel and subsequent move of the U.S. Embassy to Jerusalem (May 14, 2018) and the Abraham Accords (Aug. 13, 2020). “Ambassador David Friedman was the first ambassador to get America to respect it’s own laws and move the embassy to Jerusalem,” Ya’akov Trump said.

Being grounded by faith was an advantage for Friedman as a diplomat, he said. “It’s just a game changer,” David said. “You go to work every day, you believe you're doing the right thing, you seek guidance when necessary, you try to immerse yourself as much as you can in holy texts, and you speak with God and you speak with your wife and get her support… That’s the secret sauce.”

Friedman feels that politics is difficult without these values. “If you're just sort of adrift and untethered from any values and you’re kind of just floating around—politics is such a real sport— it’s much, much more difficult.”