Hewlett’s Never Forgotten is growing, in a good way 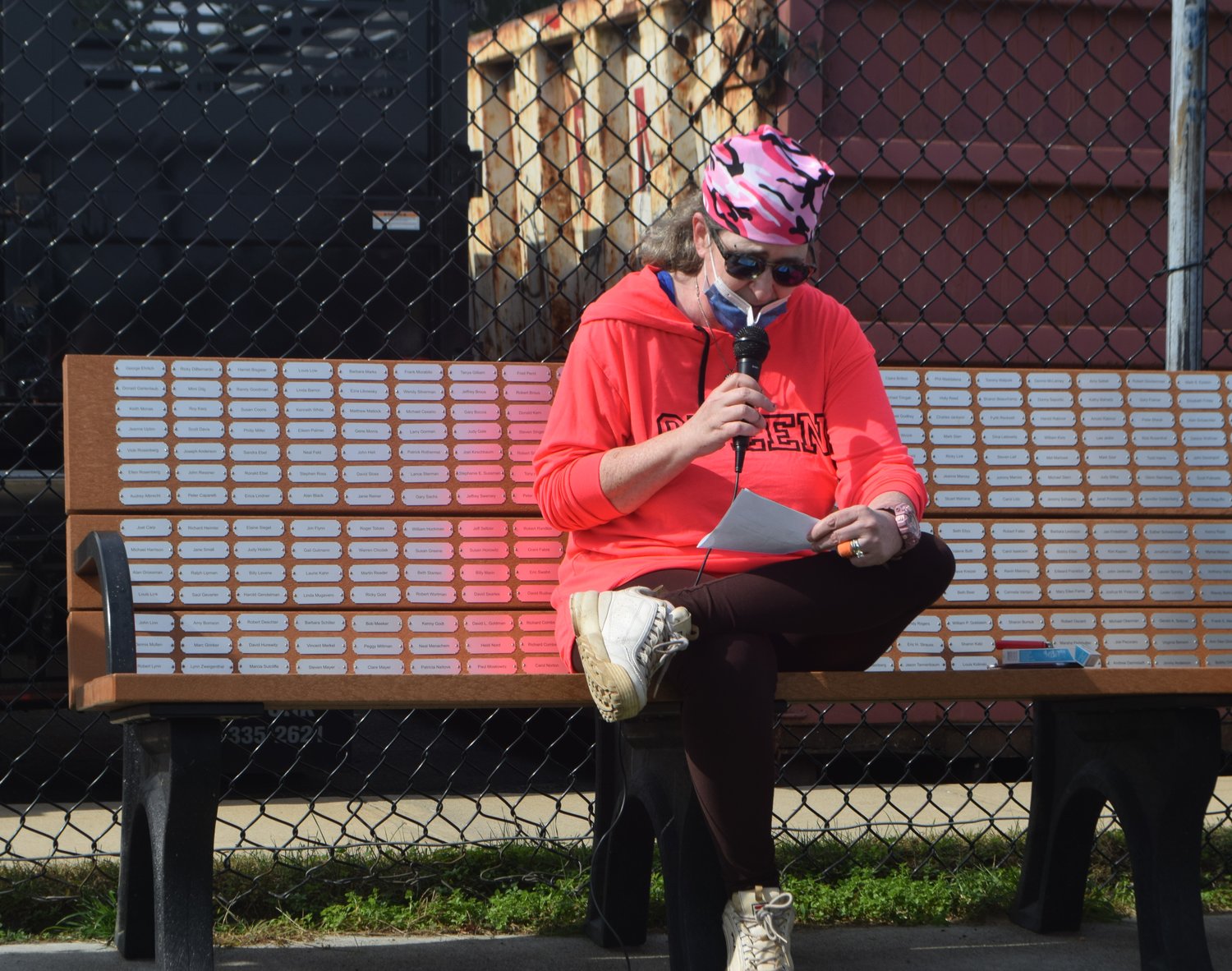 People, some with bouquets of families, gathered around and near the three benches with more than 600 memorial nameplates on the campus of Hewlett High School as 1970s rock music from the Allman Brothers to Steve Miller poured out of a single speaker.

The Never Forgotten R.I.P. group begun by Patty Proppe remembers alumni who died. After not having an in-person event last year because of the coronavirus pandemic, a memorial gathering was held on Oct. 9. To those who attend it seems akin to a second gravesite for their loved ones.

Proppe, a Woodmere native, established the Hewlett High School Lost Alumni group in 2013, and the related Facebook page Hewlett High School..Never Forgotten..R.I.P.  She said previously that classmates had died during her high school year and were not being properly recognized. This is a way to do that. The bench memorial began in 2017.

Before the reading of names of those who died in the past year-plus, Proppe addressed Covid’s impact.

“We’ve had a lot of loss over the past 18 months,” she said noting Hewlett alumni as well as those lost to the pandemic worldwide. “It has been a difficult time for so many. Living in a world where for many, many months we could not see people, hug people, be with our families and friends when they needed us the most.”

David Friedman, president of the Hewlett-Woodmere Business Association, who lost his sister, Joan, a Hewlett alum, this year, said: “We’ve all had a lot of losses and this last year has not been great.”

A moment of silence was observed before the reading of names began. Rose Brous, who lost her husband, Charlie (class of 1972), read names on what was designated bench one. Married 47 years, Brous said she knew Charlie since she was 17. “The life we lived together was wonderful,” she said.

On bench two, Debbie Ellsmore, who lost her best friend Mary Ristano (class of 1972), Proppe’s cousin, read several names and then remembered her BFF. “She was a good friend of mine, I went to all of her shows, we did everything together, I love her and I miss her,” Ellsmore said.

Calling herself an “adopted alum” Margi Stamile, a teacher’s aide in the Hewlett-Woodmere School District, read names on bench three, recalled her husband, Martin who died (class of 1966) and expressed an optimistic outlook on the future.

Propped termed the past 19 months “gut wrenching” along with knowing that people have lost loved ones not only to Covid and other illnesses but to drug overdoses and suicide.

“Friends of mine have lost husbands, children, other friends have lost their sisters, I lost my cousin Mary,” she said. “For me I’ve prayed every day that we would wake up from this nightmare that continues on. We’ll get through it all. We’re Hewlett High School how could we not.”

Proppe, a survivor of uterine then ovarian cancer, who takes the three-hour, 145-mile trip from her home in Pennsylvania to coordinate the memorial ceremony, found a bittersweet silver lining.

“What I’m seeing now is a lot of friendships and bonds forming, and its escalating each year,” she said. “So, for me it’s a good thing because some of these families need support that they weren’t getting and now they have friends they met here that they can relate to the same thing.”