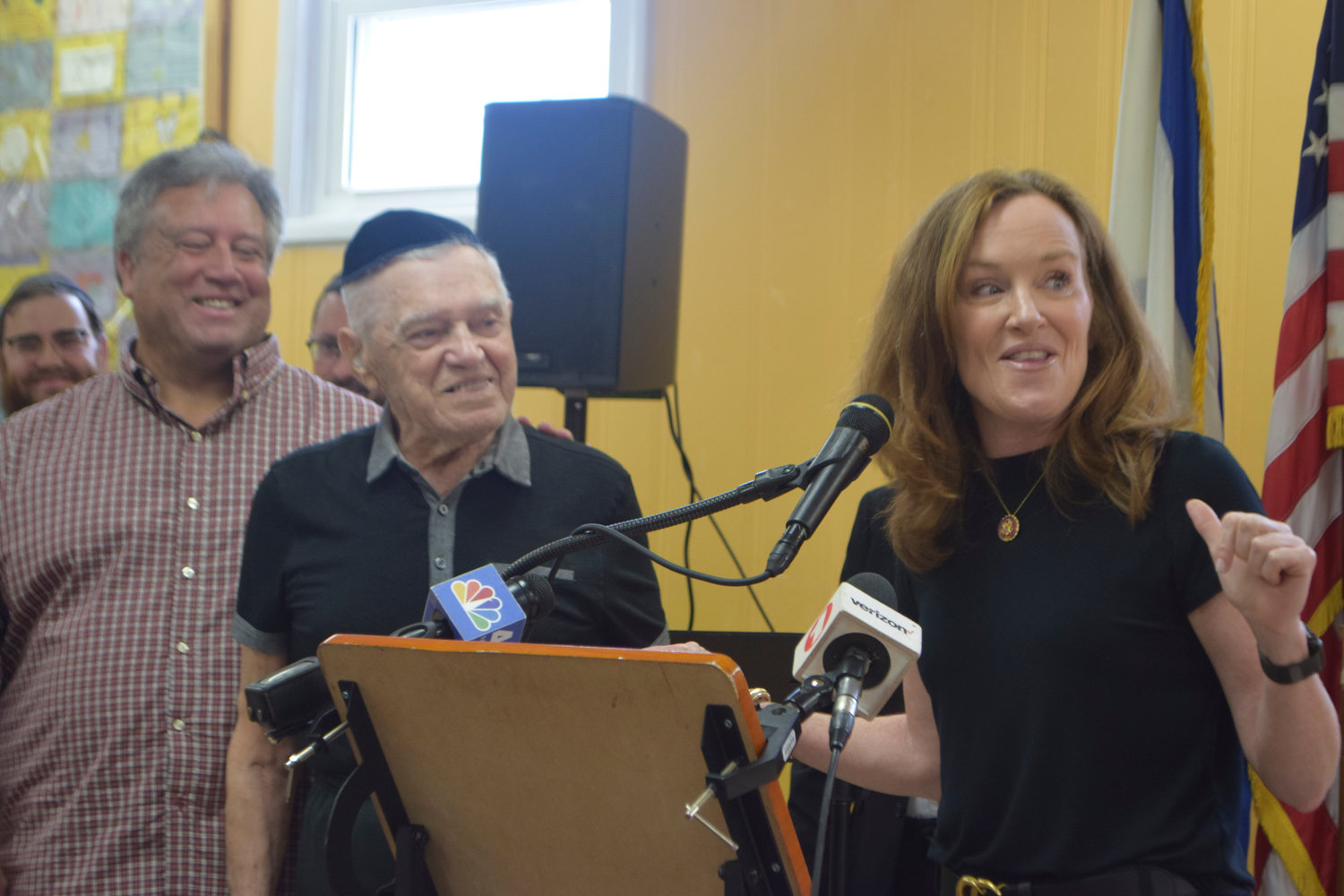 Holocaust survivor Marvin Jacobs, center, was honored by the Gural JCC on June 6. With him were his son, David Jacobs, and U.S. Rep. Kathleen Rice.
Jeffrey Bessen/Herald
By Jeff Bessen

While many of the men and women who are considered part of “the Greatest Generation,” who grew up during the Great Depression and lived through or fought in World War II, are well into their 90s and dying at a rapid rate, a group of Holocaust survivors who are part of the Marion & Aaron Gural JCC has grown to more than 350 people in recent years.

The Cedarhurst-based Gural JCC, which also includes the Harrison-Kerr Family Campus in Lawrence, has seen the group grow because many older Jews have moved to Nassau County’s South Shore to be with family and friends, Cathy Byrne, the center’s associate director for older adults and special needs, explained. “The last two to three years, we have seen a growth in all our Holocaust programs,” she said, adding that the survivors are “predominantly from the Five Towns, a handful from Far Rockaway, a few from Lynbrook and Valley Stream, and one from Massapequa.”

The JCC offers programs and services for survivors ranging from case management and entitlement assistance to home visits, holiday celebrations, one-on-one counseling and groups such as Chaverim, whose members socialize during weekly educational and recreational activities. Chaverim also offers crisis intervention, group therapy, health monitoring and counseling. A kosher lunch is provided, along with round-trip transportation for some of the members.

There is also a Second Generation Holocaust group, which serves as a network for the children of survivors. Its mission is to help preserve and honor their parents’ legacy.

In the Survivors of the Holocaust group, members talk about their lives before and during the war, in what JCC officials describe as “a relaxed, friendly atmosphere.” The survivors and another JCC group, Café Europa, take part in social events, holiday celebrations and celebratory lunches and trips.

“This fall we added a new program for survivors that are dealing with cognitive impairments,” said Byrne, a gerontologist and a registered nurse who has lectured in the metropolitan area, California and Israel on the Holocaust services offered by the JCC. “Our L’Chaim program is a social day care program that uses a Montessori approach to help connect our members to joyful memories of the past.” Montessori education is based on self-directed activity, hands-on learning and collaborative play.

Byrne added that L’Chaim is a specialized program customized to the needs of the survivors, a majority of whom are 95 or older and “benefit from the JCC’s compassionate care,” she said. It offers intergenerational activities, creative arts and music, the use of iPads to maintain cognitive skills, and therapeutic exercises.

The survivors program, Aaron Rosenfeld, the JCC’s chief executive officer, explained, “allows us to do a lot of intergenerational programming, helps to create a real sense of community, and by participating in various school programs, we continue retelling the story so it never happens again.”

“Until my retirement, I shied away from it,” Igielski, 91, said at a UJA-Federation of New York Holocaust remembrance event on May 1. “I never spoke about it. I never wanted to meet another Holocaust survivor . . . I was lucky. I lived. Most people died. I had a life full of miracles.” The UJA is a major sponsor of the JCC.

Marvin Jacobs, 97, who also attended the UJA event, was feted by the JCC on June 6. Jacobs, born Monyik Yakubovich in Poland, survived seven concentration camps. His six siblings, three brothers and three sisters, all died in the Holocaust. “I survived,” the Woodmere resident said three times as he spoke to reporters. I’m grateful to God. I’m blessed.”

“You participate in one of these programs that is enhancing the lives of our survivors and the opposite happens,” Rosenfeld said. “They are enhancing our lives.”