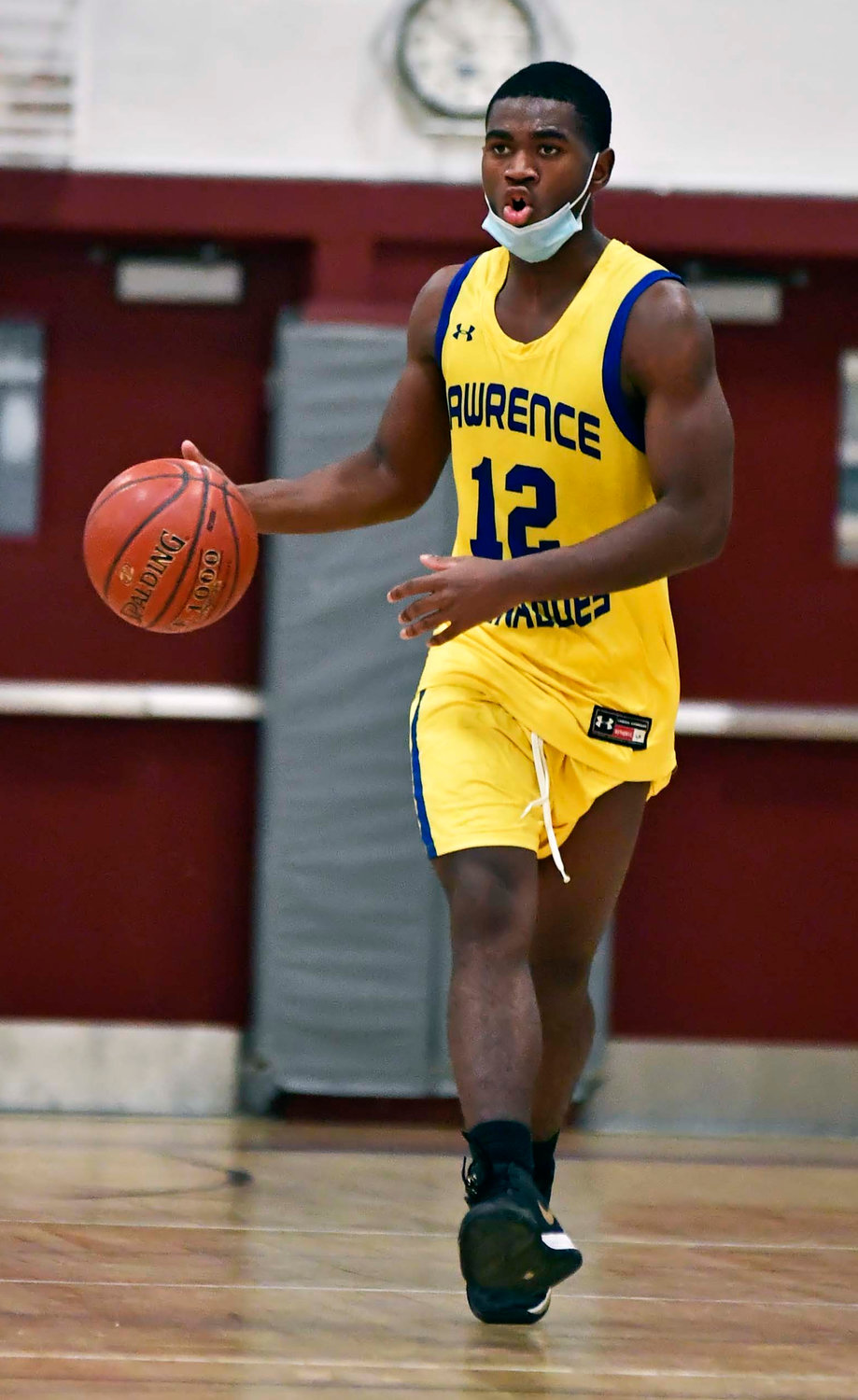 Time is running out for Lawrence’s boys’ basketball team to salvage its season.
The Tornadoes have two victories against Conference A-5 opponents through six games with four to go following a split of a home-and-home with Island Trees last week. A top four finish in the six-team conference or a minimum of five wins qualifies them for the playoffs, leaving little room for error down the stretch.
“Turnovers are hurting us more than anything else, but today we had only nine and we were one point away from having all five starters score in double figures” head coach Lou Robinson said after Lawrence’s 57-51 home win over the Bulldogs last Saturday afternoon. “We’re averaging about 20 turnovers per game so we’re making it harder on ourselves than it needs to be.”
It wasn’t until the fourth quarter of the first meeting Jan. 19 at Island Trees when turnovers became a problem for Lawrence (4-9 overall.) The Golden Tornadoes held an 8-point lead through three quarters but slowly saw it slip away and Antonio Mathew scored the final three points to give the Bulldogs a 46-43 decision.
“There’s really not that much difference between the top and bottom of the conference,” Robinson said.


Mathew had a game-high 20 points, including a stunning near full-court heave at the end of the first half at the buzzer to bring Island Trees within 28-24 after Lawrence executed a perfect possession and scored on junior Dexter Robinson’s layup with 1.6 seconds to go. Senior Don Smalls III scored 8 of his team-leading 17 points in the second quarter and was the surest ball-handler on the floor throughout.
After Island Trees’ Joseph Meyer (10 points) opened the second half with a trey to make it a 28-27 game, Lawrence scored 9 of the final 11 points of the third quarter to build its biggest advantage of the evening at 37-29. Dexter Robinson (14 points) capped the run with a shot from behind the arc after baskets by Smalls III and senior Kanye Robinson on previous possessions.
“I was worried that long three pointer they hit was going to come back to bite us, but then we had a strong third quarter,” coach Robinson said. “Then we just fell apart.”
The margin was down to 37-36 after Kian McCoy, Meyer and Mathew combined for the first seven points of the final quarter. Then, after Dexter Robinson and Mathew traded hoops, McCoy gave Island Trees its first lead since the early stages of the second quarter with a pair of free throws.
The Bulldogs led 43-41 thanks to a Nicholas Saragosi three-pointer with 1:50 left. Dexter Robinson answered to tie it, but Mathew hit the eventual winning field goal with 38.2 seconds remaining.
In last Saturday’s critical rematch, Lawrence outscored Island Trees 16-4 in the third quarter to break a halftime tie. Dexter Robinson led a balanced attack with 15 points. Kanye Robinson added 12, junior Tyler Bowers had 11, sophomore Avery Folawiyo chipped in 10, and Smalls III had 9.