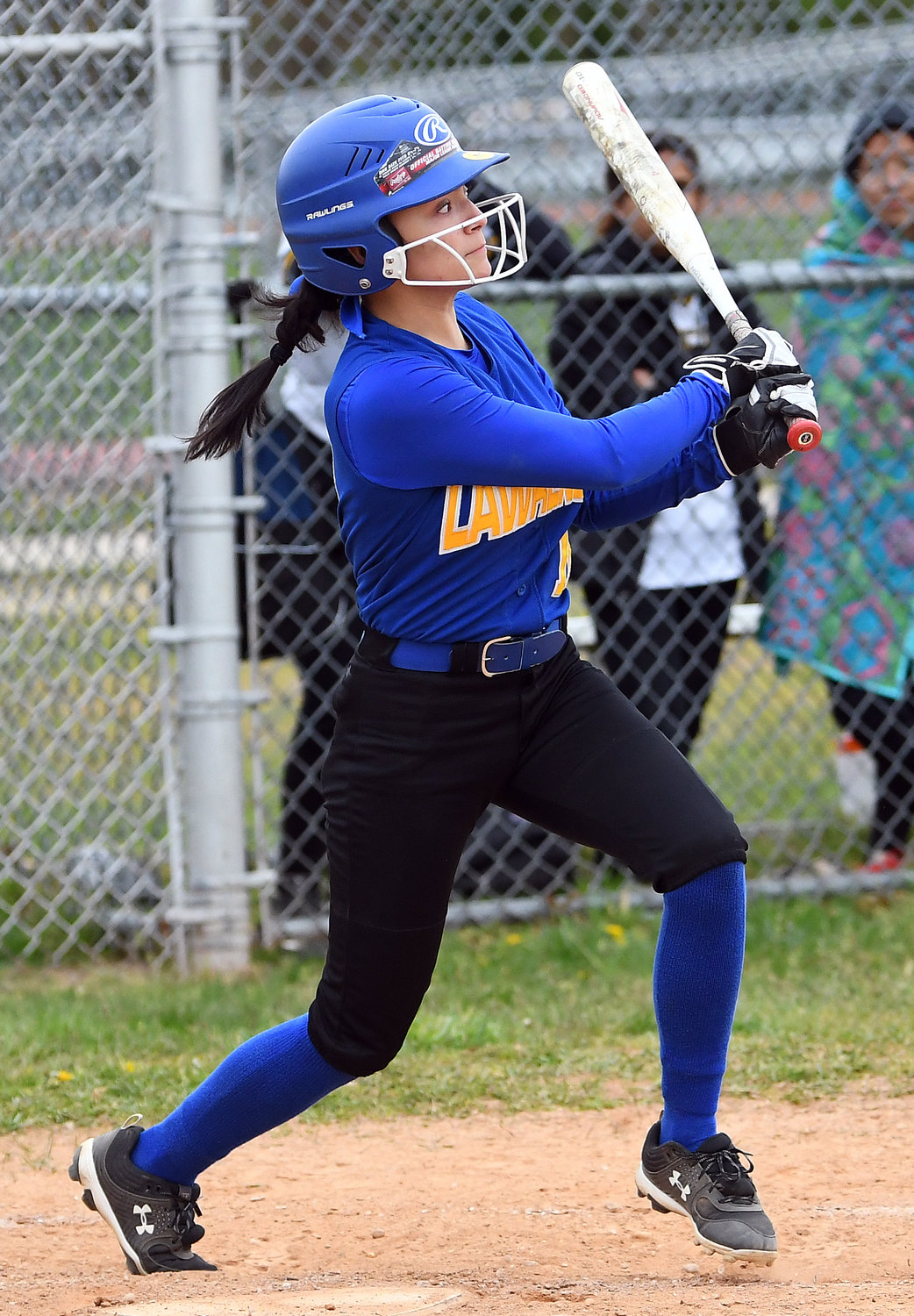 Junior Cynthia Saravia is already in her fourth varsity campaign and converted from shortstop to full-time catcher this spring.
Neil Miller/Herald
By Tony Bellissimo

Lawrence has been able to carry over some momentum from last year’s .500 campaign and an appearance in the Nassau Class A softball playoffs, including a win over Great Neck North in an elimination game.
The Golden Tornadoes already have a five-game winning streak under their belt and are in the conversation for the Conference VII title with a 7-2 record as the schedule turns for home.
Second-year coach Jason Supple said offseason dedication and a consistent work ethic are two major reasons Lawrence is enjoying success. “These girls have been working to get better since November,” he said. “It’s been great to see their dedication pay off in the results.”
Supple is hopeful a 20-9 defeat to Uniondale on April 25 was just a small setback. It was a four-run game in the fourth inning when Lawrence uncharacteristically committed seven errors. “Uniondale is a pretty good team and we beat them by two runs the first time we played,” Supple said. “We just didn’t play very well this time. It was a big game we couldn’t take advantage of, but we have to put it behind us.”
Hard-throwing junior Gabby Guevara, who has two wins and a save, has handled most of the pitching work lately while senior Stephanie Vinas heals from an injury that hasn’t kept her bat from contributing. Vinas emerged as the starter early last spring and is a vocal leader as well as the team’s leadoff batter.


“Stephanie had to hold off throwing for a few weeks, but we’re hoping the injury is behind her and she’ll be able to help down the stretch,” Supple said. “She’s still been a big part of our offense. She’s a good contact hitter who gets on base.”
Vinas,, who has five wins, and junior catcher Cynthia Saravia are captains and have chemistry on and off the field, Supple said. Saravia is already in her fourth varsity campaign and converted from shortstop to work behind the plate. “Cynthia loves playing catcher,” Supple said. “She caught a few games last year but was primarily our starting shortstop. She’s a heck of a defensive player and hits for power.”
Sophomore Ariana Watson and senior Sascha Sperling are getting the job done at shortstop, anchoring the defense along with seniors Emely Calderon and Chloe Schillio at third and first base, respectively. Senior Chiara Mingolla handles second base and has been on fire offensively, Supple said, ranking among the team leaders in RBIs. Mingolla knocked in four runs to lead a 15-3 win over Westbury. “She’s locked in,” Supple said.
The outfield features senior Sunia Stays, a returning starter, in center. She’s batting cleanup and leads the way in RBIs. “She’s a quick, energetic and positive athlete,” Supple said. Junior Brianna Vargas plays left field and pitches, and sophomore Jayleen Aquino is swinging a hot bat while contributing in right field or giving Saravia an occasional break at catcher.