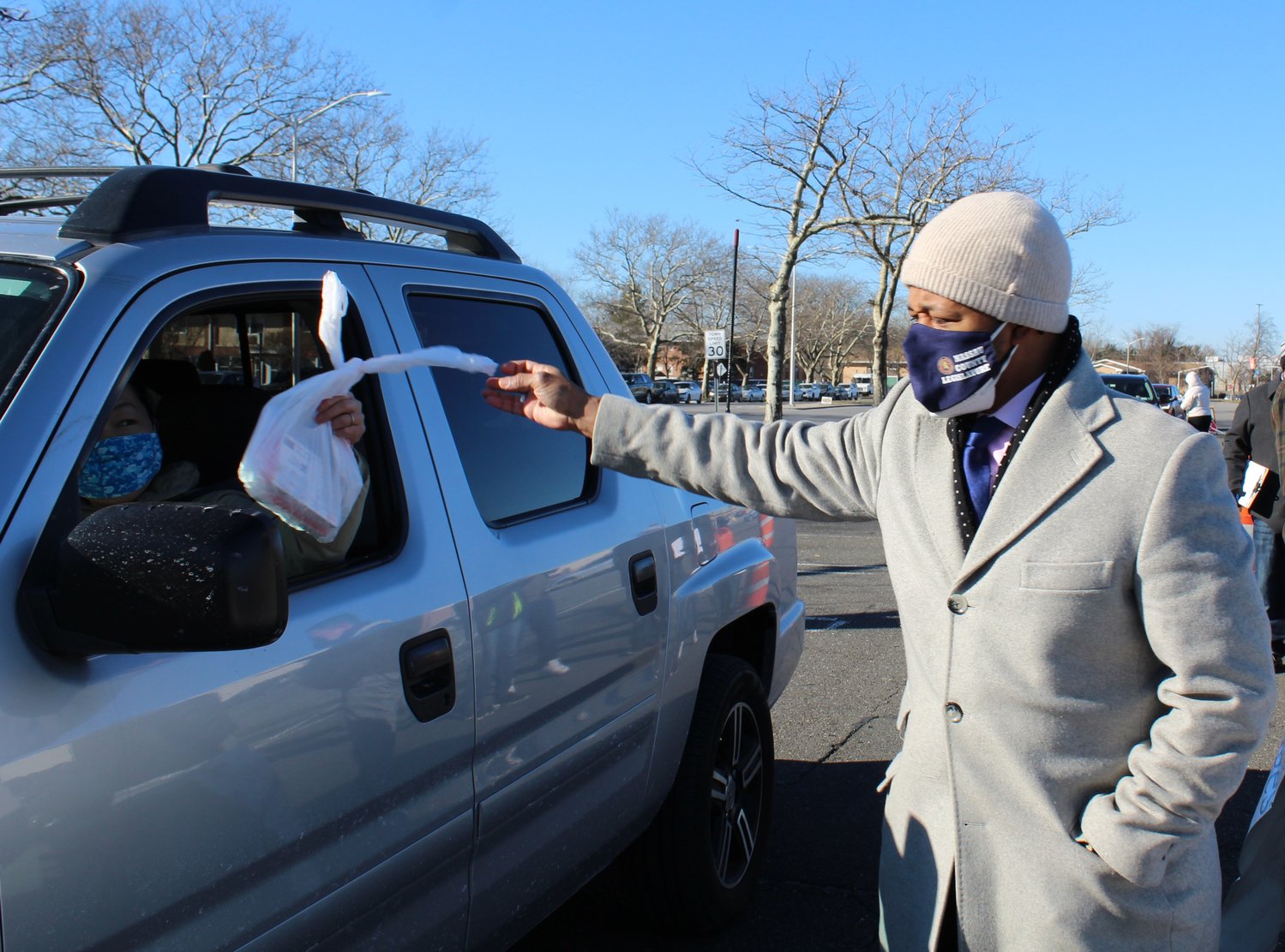 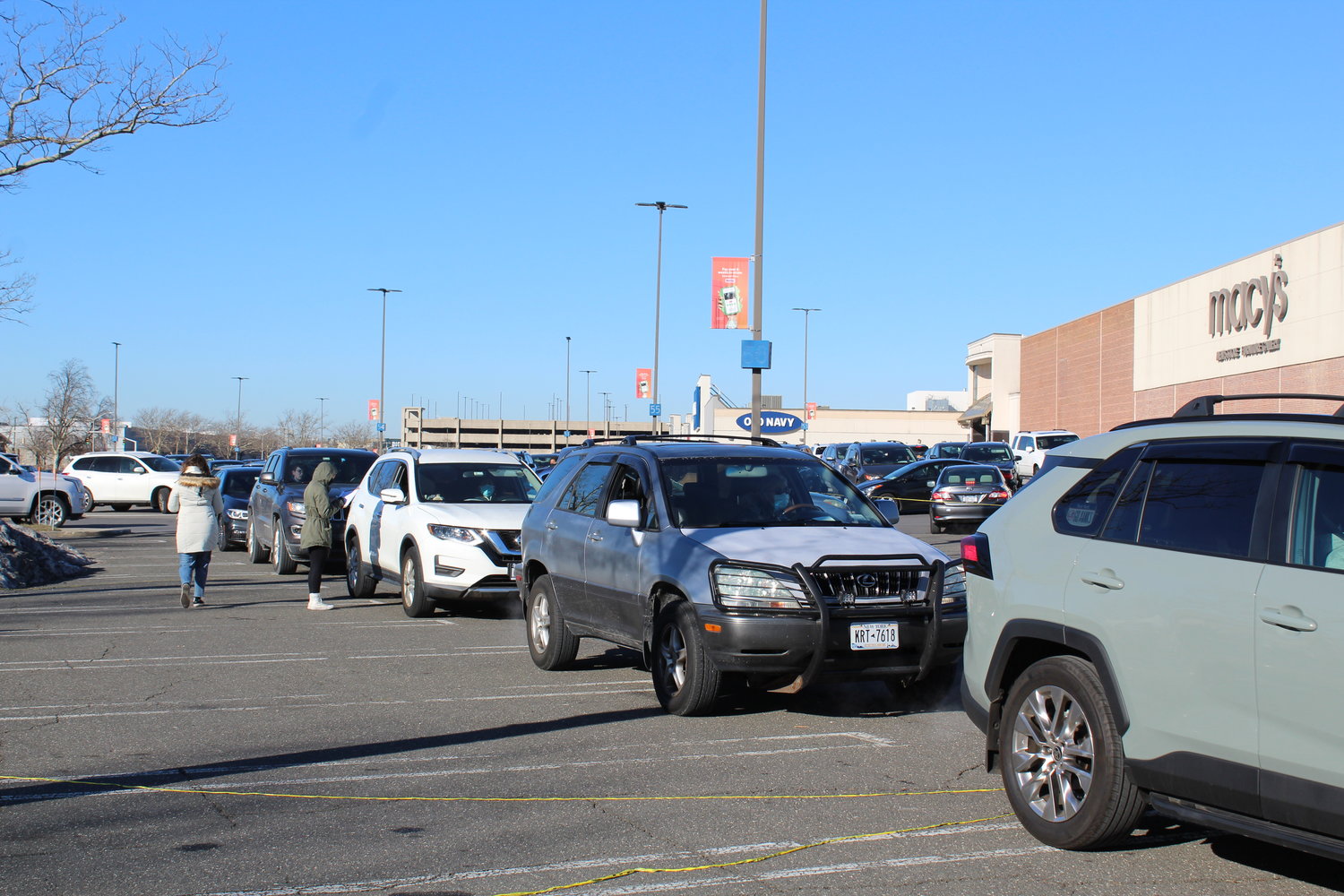 Lines of cars waited outside the Macy’s Men’s Store parking lot for their kits.
Courtesy: Karina Kovac/Herald
Previous Next
By Juan Lasso and Karina Kovac

On a sunny, bone-chilling Saturday morning, yellow caution tape marked off a section of the Macy’s Men Store parking lot at the Green Acres Mall in Valley Stream. A squad of volunteers, bundled up in layers against the below-freezing temperatures, fanned out to their assigned stations. Some, armed with clipboards and pens, stood at the front entrance of the makeshift drive-through, while others set up and ran a table with boxes of white bags, each one containing two iHealth Covid-19 antigen rapid tests.

The distribution, hosted by State Assemblywoman Michaelle Solages and Sen. Todd Kaminsky with County Legislator Carrie A. Solages, provided two test kits to each family who registered. Three hundred families had signed up for the distribution.

Details of the distribution’s time and location were sent to the registrants two days prior. Text messages gave explicit instructions that read in part: “Please do not arrive earlier than 10 a.m. and no later than 11 a.m.” The reason for this military-like punctuality was not only to avoid a mad rush, but also to spare everyone the embarrassment of having to deny a kit to someone in need who was not registered. A hundred kits were kept on the side in reserve to ensure there wasn’t a shortfall.

“We’ve been distributing test kits in Valley Stream since New Year’s Eve, with more than a thousand test kits being distributed because the need was there,” Solages said. “First, there was a lack of testing options so people couldn’t go get PCR tests, and second having a home test kit that is accessible and free encourages people to know their status

and know if they need to isolate or quarantine if needed.”

Before 10 a.m., cars had already begun to line up in front of the drive-through, with people appearing anxious to secure their kits. A minor backup of cars had thrown some drivers into a small tizzy, but it quickly abated as the distribution got under way. One by one, cars came and went, going through a brief screening before people were handed their two kits and sent on their way.

“Nassau County was giving out these test kits, and people were waiting six to seven hours and sometimes [did] not receive [them]…and it created [this situation] where people felt they needed to come early in order to ensure their test kit, and that’s why we created this system,” Michaelle Solages said.

“There’s a shortage [of test kits], and we want to make sure that if something ever does happen, we have something at home to get tested,” said resident Reno Choto, who was in search of kits for his family and discovered news of the distribution through social media.

Barry Pastor, 70, said his wife registered for the Covid-19 test, telling him to “put this [name tag] in the car and go get [the Covid kits].” All his children are front-line workers, serving as either police officers or nurses. Having given all his home test kits to his adult children, he needed some for himself. “My son called me up, and he was feeling really bad and so was my daughter-in-law. I said I got two left and ran over to give them to them. Then when [this kit distribution] became available, I signed up,” Pastor said.

“This will be one of our last distributions now that the federal government is mailing test kits to your house. There will no longer be a need for us to distribute them locally, and I encourage people to sign up for the free service,” Solages said.

Families nationwide will indeed be able to visit the newly launched federal website covidtests.gov to request free tests, with the first shipments expected to go out to households by the end of the month. The first batch of shipments will be limited to four rapid tests per residential address, irrespective of the number of occupants, according to White House officials. Shipments are expected within seven to 12 days of ordering through the U.S. Postal Service.

Resident Grace Alessi, 51, said she had purchased $100 worth of test kits before traveling to Florida last December, before the government announced the free nationwide delivery program earlier this month. “I bought more because I was concerned that I was going to need them, and now they’re free…It makes no sense,” said Alessi, who was irked by the fact that she and millions of other Americans who bought test kits before the new service will not be reimbursed for their purchases.

“Covid-19 is still here, and we need to ensure our neighbors are adequately protected. I am proud to partner with Assemblywoman Solages and Legislator Solages to get testing kits, masks, and hand sanitizer to those who need it,” Kaminsky told the Herald.

“I’m very excited to provide the test for our community. We will be doing this in a very organized and safe manner. We have been doing this for the past several weeks. I’m looking forward to continuing,” Carrié Solages said.