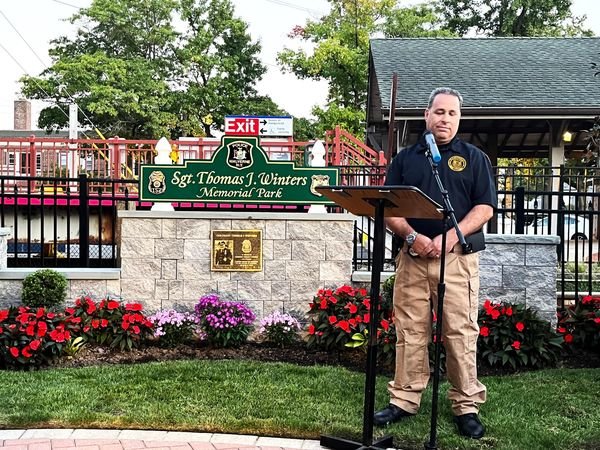 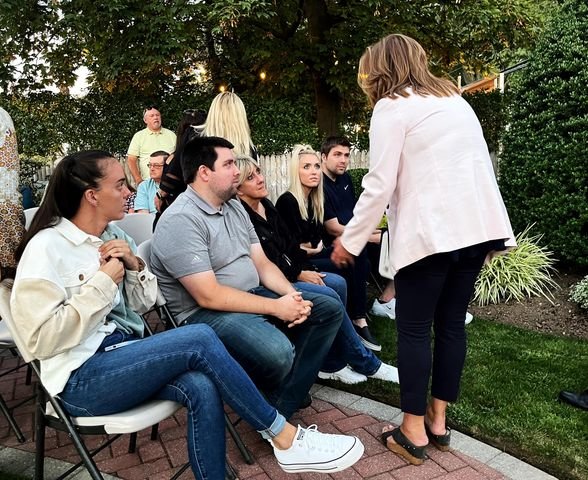 Assemblywoman Judy Griffin offered condolences to the family of the late Sgt. Thomas Winters at the dedication ceremony for a park now named in his honor. The sergeant’s daughter, Megan; son, Christopher; wife, Julie; daughter, Kelsey; and son, Brian, still feel his loss after his sudden death on July 3, 2021.
Courtesy Office of Assemblywoman Judy Griffin
Previous Next
By Kyle Chin

Police Sgt. Thomas J. Winters, who died suddenly last year, was honored on Sept. 15, as the Village of Malverne opened a memorial park in his name.

Winters died unexpectedly of unknown causes on July 3, 2021, at age 55, leaving behind his wife, Julie, sons Brian and Christopher, and daughters Megan and Kelsey.

“It was a devastating blow to his family, the Malverne Police Department and the entire community,” said Winters’s fellow officer, Anthony Castellano, who  serves as president of the Malverne Police Benevolent Association, a position that Winters once held.

Winters was active in Malverne and the surrounding communities, serving in the Elmont Fire Department’s Truck Co. No. 1 for many years, as well as coaching roller hockey in Lynbrook.

Naming the park in honor of Winters is the latest tribute to him over the past year. The Malverne PBA, under Castellano’s leadership, organized a scholarship in Winters’ memory earlier this year. Winters’ family selected two essay winners, who were each awarded $500 in August. The scholarship money was raised, in part, using funds from Gregory Waxman’s and Peter Hawkins’ Run for Heroes throughout Malverne.

Plans to rename the park to honor Winters were announced at Malverne’s Aug. 3  board meeting.

“It’s this village’s pleasure to honor Sgt. Winters in the way he deserves,” Malverne Mayor Keith Corbett said. “He’s someone who gave to this village for many, many years, and someone we still feel the loss of every day.”

Earlier this year, the Malverne Department of Public Works spruced up the small park, replanting and repaving the area out of the department members’ own expenses.

“DPW, their union, donated the costs of all the plants and all the plantings,” Corbett said. “It’s really a beautiful park.”

Standing at the center of the new Sgt. Thomas J. Winters Memorial Park is a tree dedicated to Mary Ruchalski, a student from Rockville Centre, who died from a rare form of pediatric cancer in 2018, just shy of her 13th birthday. The tree was recently decorated in gold lights to commemorate pediatric cancer awareness month.

Winters’ friends and family, members of Malverne’s police force and politicians gathered at the small park on the evening of Sept. 15 to officially unveil a memorial wall bearing Winters’ name.

Assemblywoman Judy Griffin attended the opening ceremony and offered condolences to the late sergeant’s family. Although Griffin did not know Sgt. Winters too well, she recalled his warm and engaging smile from the times she encountered him.

“During his 21 years of service on the Malverne Police Department and 10 years as Malverne PBA president, Sgt. Thomas Winters was an exceptional officer who displayed dedication and diligence in protecting the Malverne community and advocating for his officers,” she said.

“I am sure that this memorial park in his name will give solace to his family and many friends,” Griffin added.