Fundraiser to pay off mortgage and renovation costs 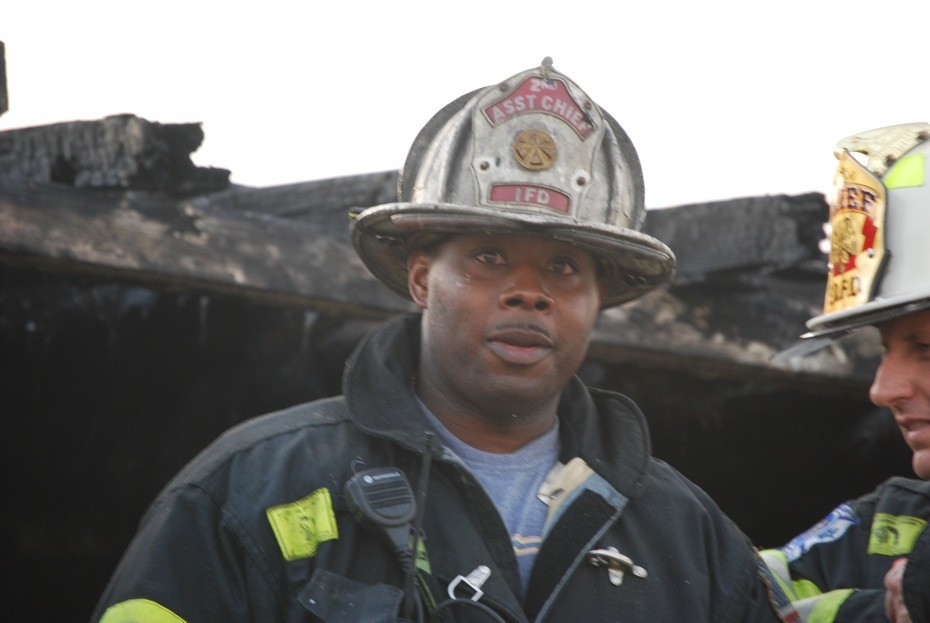 The Stephen Siller Tunnel to Towers Foundation announced it will raise $300,000 to pay the mortgage and future renovation costs for the family of Joseph Sanford Jr., above, an Inwood firefighter who died on Dec. 23.
Bill Kelly/Herald
By Vanessa Parker

Manhattan-based nonprofit Stephen Siller Tunnel to Towers Foundation announced on April 7 the launch of a fundraiser to help the widow of Inwood firefighter Joseph Sanford Jr., Jacqueline Scott-Sanford, and her daughter, Janisha to help defray their mortgage and any future home renovation costs.
Sanford, 43, was fighting a fire at 787 Central Ave. in Woodmere early in the morning on Dec. 19, when he fell through the first floor to the basement and was trapped under debris. He died from his injuries four days later.
The foundation is setting a goal of raising $300,000; Bank of America is expected to contribute half and the remainder will be raised by selling 1,000 tickets in the same section for the Aug. 4 Yankees/Red Sox game. United Mavericks, a social group committed to charitable and philanthropic endeavors, led by Tony Lubrano, announced that they bought 300 tickets.
John Hodge, the vice president of operations for the foundation, said that he learned about Scott-Sanford through Peninsula Kiwanis Past-President Christopher McGrath, an Inwood native who now lives in Hewlett. “Our organization will match 50 percent of the fundraising efforts,” Hodge said.
Established in honor of fallen 9/11 firefighter Stephen Siller, the foundation works to support first responders. In addition to assisting Sanford, the organization helped to raise $1 million to pay off mortgages the family members of slain NYPD detectives Wenjian Liu and Rafael Ramos, earlier this year.


Frank Siller, the chairman and CEO of the organization, said how his brother’s life was the inspiration for the work they do to help others. “My brother passed with 300 brothers that day,” he said. “His death changed our lives forever. We hope to take his sacrifice and turn it into something good. Your [Sanford’s] family has experienced a tremendous sacrifice. Thank you for your husband’s sacrifice.”
Married to Joseph for 22 years, Scott-Sanford said he was a great spouse and dad, and she appreciates the outpouring of support. e “He was a wonderful husband and father,” she said. “I’m so thankful for everyone’s help.”
Sanford, a 17-year member of the Inwood department, who was promoted posthumously to chief, will be missed, said Chief Gaetano “Guy” Marino. “Joe Sanford was a dedicated firefighter,” he said. “He was such an important part of our organization.”
For more information about the fundraising efforts for Sanford’s family go to www.tunnel2towers.org.