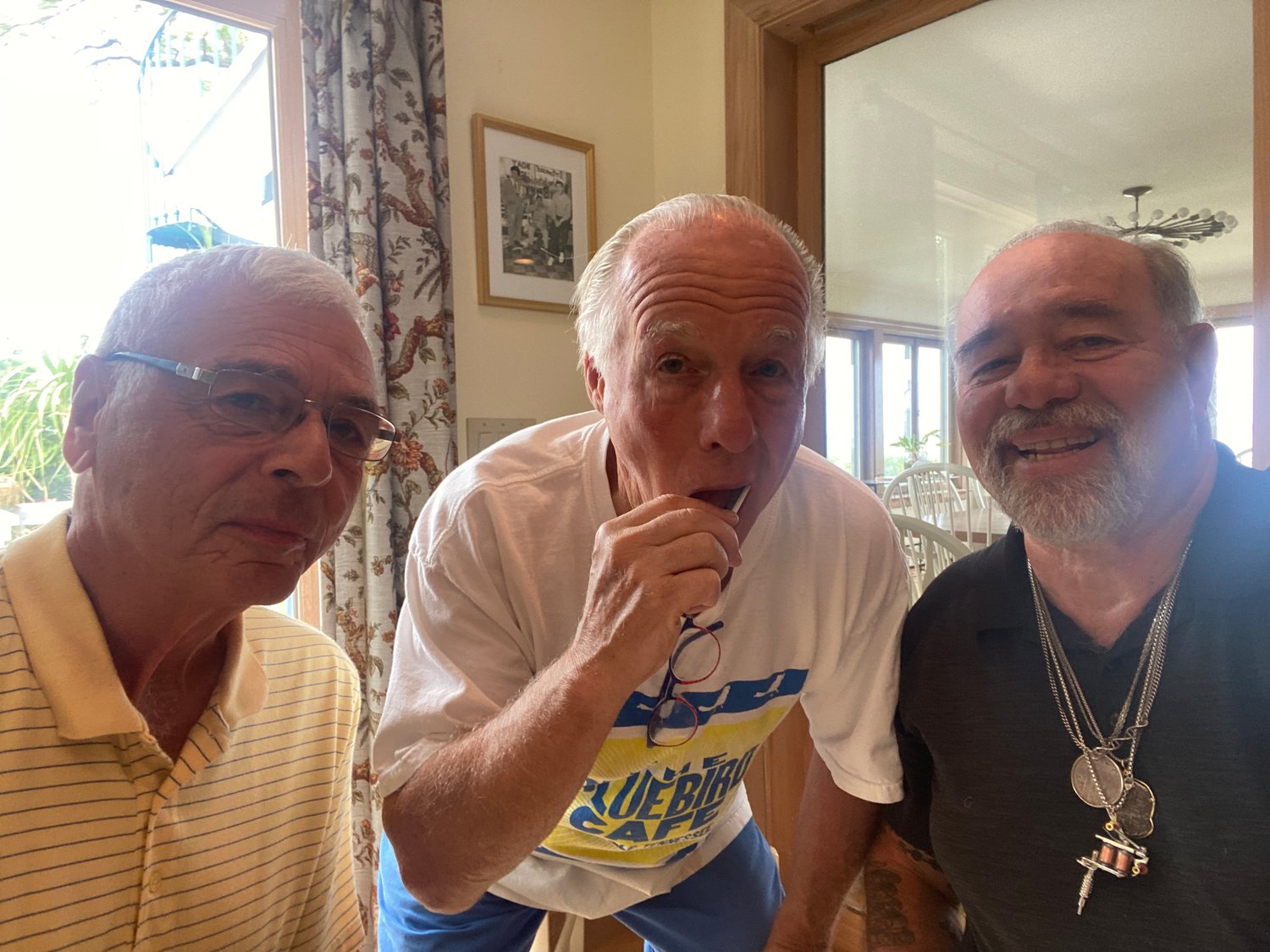 Jackie Martling, center, did the cheek swab for the DNA test with Pat Alesia, left, as a witness and Syd Mandelbaum.
Courtesy Syd Mandelbaum
By Jeff Bessen

Ever wonder if you or another family member is related to someone that could be part of your familial tree? If you do, then Cedarhurst resident Syd Mandelbaum could be your go-to person.

A scientist involved with genetics since 1983, he helped disprove the claim a decade later of an Anna Anderson Manahan that she was the Princess Anastasia Romanov, daughter of Czar Nickolas II and Czarina Alexandra.

In 2003, Mandelbaum met comedian Jackie “The Jokeman” Martling at a fundraiser for heavyweight fighter Gerry Cooney’s organization Fist at Pegasus at the Meadowlands Racetrack. Learning that Martling grew up in Oyster Bay they bonded over a game of “Do You Know,” and found out that Martling went to high school with cousins of Mandelbaum and knew Mandelbaum’s Uncle Herman as well.

Martling became a board member of Mandelbaum’s Cedarhurst-based anti-poverty organization Rock and Wrap It Up! and then Martling told Mandelbaum the family secret – that his great-grandfather Franklin Hall was the half-brother of Theodore Roosevelt, who born in 1858, Hall a year later. Theodore’s father, Theodore Roosevelt Sr. was hunting in Maine when Theodore was born and could have possibly fathered a child during that time given the proclivities of men of power and wealth.

Hall worked for years at Roosevelt’s family’s summer home Sagamore Hill in Oyster Bay, and he, his wife, Mary Garvin, and their eight children, were all very close to the entire Roosevelt family. Mandelbaum said that with the proper DNA samples, this could be an even easier mystery to solve than Anastasia’s.

“You have to know how to do this, you don’t want to be second-guessed,” Mandelbaum said, who members famed molecular biologist Dr. James Watson of Cold Spring Harbor Laboratory among his connections in the DNA world.

Mandelbaum donated his scientific papers on the Anastasia research to the lab. Coincidentally, Martling’s deceased brother James worked for Watson in the Cold Spring Harbor lab in the 1990s.

Earlier this year, Martling researched the Roosevelt family tree and along with his cousin John Hammond, the Town of Oyster Bay historian, they found William Emlen Roosevelt II of Katy, Texas on ancestry.com. His great-great grandfather was Theodore’s father’s brother, James Alfred Roosevelt.

“I’ve been researching this for 25 years,” Hammond said, noting all the anecdotal evidence and rumors. “We’ve been trying to contact a Roosevelt who was willing to do this and very luckily found [Emlen].”

Mandelbaum said Emlen “has a direct Y-chromosome to his forefather, Cornelius van Schaack Roosevelt Sr.” Testing found that Y-chromosome markers 111, 67 and 37 did not show a match.

Though the anecdotal evidence is strong, the key genetic evidence generated the conclusion that there is not a genetic relationship between the Hall and Roosevelt families.

Martling was hoping that the genetic family connection was true but said he is not disappointed and noted the deep bond the families had. Giving it a comedian’s twist Martling said, “It would have been fun if it was true and I'd have the oddest of bragging rights,” adding that he appreciated the work done by everyone who was involved.

For Mandelbaum, who remains a scientist at heart, “It was just fun doing it,” he said. “I love getting involved in these things and pushing the envelope.”