Overcoming the anxieties of a commitment-phobic man 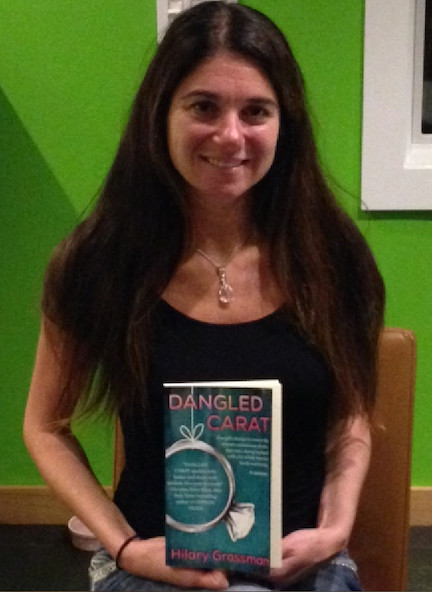 After Atlantic Beach resident Hilary Grossman began dating her now husband, Marc, she thought their relationship was something many women experience and could relate to — dating a commitment-phobic man.
“I wanted others to feel like they weren’t alone,” she said. “I started blogging four years ago and then went to a conference about turning a blog into a book. It motivated me to stop dreaming and start writing.”
Grossman debuted her first book, “Dangled Carat,” which chronicles her dating journey, last month. “It’s a humorous attempt at getting a commitment-phobic man into a relationship with the help of his friends and family,” she said. “It’s an inspirational story that tells you to ignore conventional dating advice and follow your heart.”
Throughout the writing process, Grossman learned a lot about herself. “It was almost like going to therapy; it really made me think about my dating choices and why I chose to stay with Marc as long as I did,” she said. “Also writing this story forced me to face my insecurities and admit them. These feelings motivated me to keep writing, because I hoped that my story could help and inspire other girls like me.”
After making the decision to self-publish, Grossman sought the help of editor Christina Baker Kline, a New York Times and USA Today bestselling author who has written nine books, including five novels, along with several essays. “I read the manuscript and edited it line by line, and also offered conceptual suggestions about how to make the story move more quickly, with more suspense,” Baker Kline said. “When I read the manuscript I knew she had something special; it had heart, which is something no editor, no matter how skillful, can add if it isn’t there.”


One of the main characters in the book, Jaye Olafson, a longtime friend of Marc’s, staged a faux engagement in order to get him to commit to Grossman. “The whole thing was completely spontaneous, really part of the continuing process on my part, and multiple people, trying desperately to bring Marc to his senses,” Olafson said.
Letting things take their natural course in her relationship ultimately resulted in Grossman’s happiness. “In the end, while I was insecure, the relationship with Marc helped me find a strength I didn’t know I had,” she said.
Olafson said the book perfectly emulates Grossman’s relationship. “The best thing about the book is that it’s true; Hilary and Marc are the real deal and this is a true story about true love,” Olafson said. “It doesn’t get better than that.”
“Dangled Carat” is available in paperback or electronically on Amazon and at Barnes & Noble. For more information, visit www.dangledcarat.com.
Report an inappropriate comment