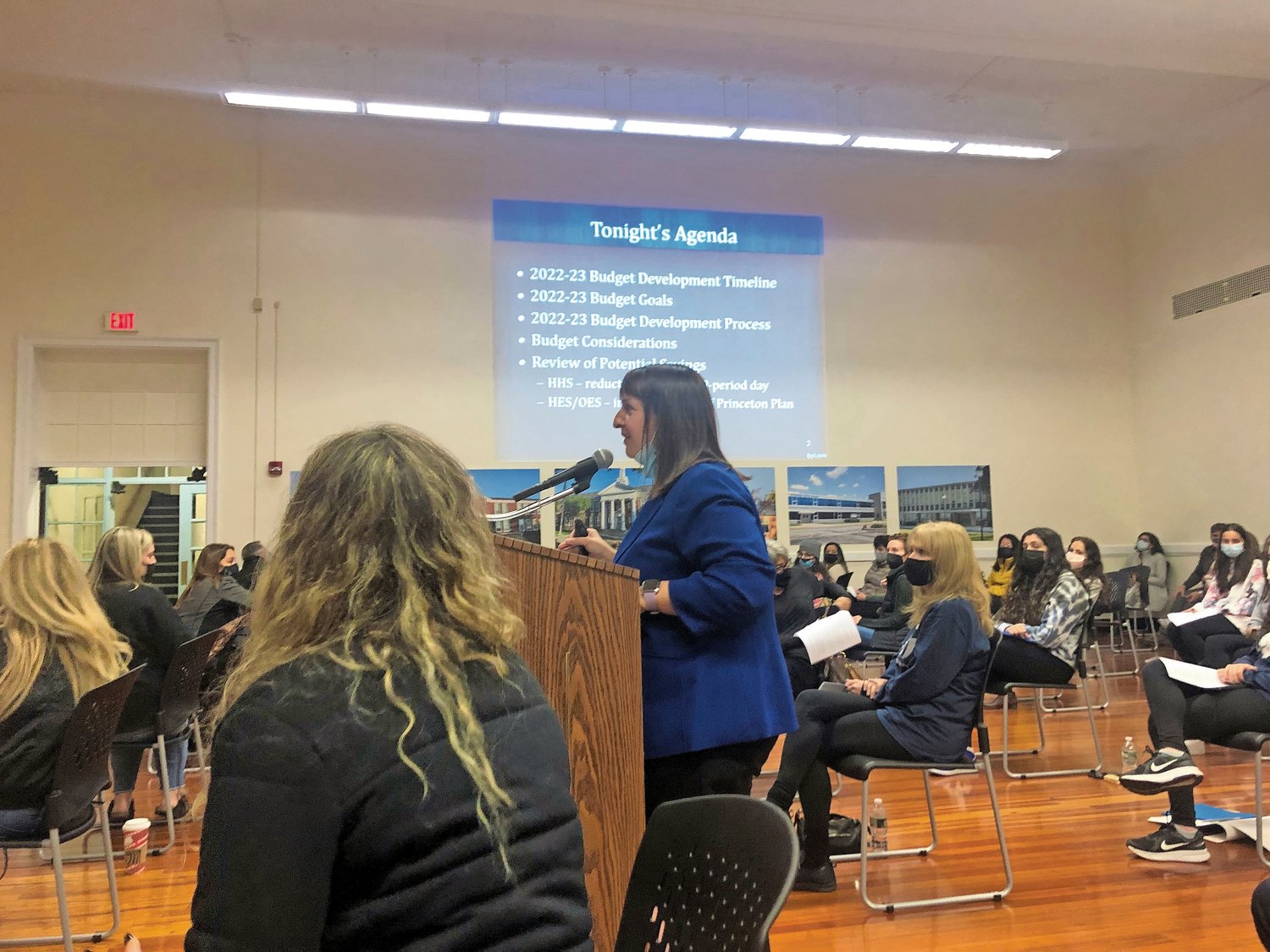 Marie Donnelly, Assistant Superintendent for Business, recapping the Board of Education’s budget presentation, which can be found on the district’s website.
Lisa Margaria/Herald
By Lisa Margaria

The Woodmere Education Center auditorium was unusually filled with parents and students for the Nov. 10 Hewlett-Woodmere Board of Education work meeting after rumors circulated throughout the school community about cost-cutting measures that included eliminating the 10-period high school day and threaten elective courses such as the arts.

At the Oct. 20 board meeting, school officials and trustees discussed ideas to cut district costs as enrollment has dropped the past 10 years. The board said that no definite decisions have been made, as Superintendent Dr. Ralph Marino Jr. must further research options.

Board members has clarified that they would not even consider cutting arts courses. “I don’t know how that message ever got through to anybody,” Board President Debra Sheinin said, “Actually, I do know for a fact, that at that presentation I said I was an art teacher, and I would never let that happen, but I don’t know how that message ever became that the board was cutting the arts.”

Trustees aimed to make it clear that they have the student’s best interest in mind and Marino will continue to prioritize education.

Hewlett High School has 63 under-enrolled classes, which, after further research, might be consolidated into fewer, larger capacity sections, but not cut. A decision about these course reworkings will not be made until Marino creates a task force. As of press time, no details about Marino’s task force have been released.

The same task force will research the cost savings of the Princeton Plan, which would move all second and third grade classes to one school and fourth and fifth grades to another. Currently, there are two elementary schools — Hewlett and Ogden — that houses second through fifth grade.

“I feel better after this meeting versus last meeting,” district resident Michelle Morgan said, “just because I think that they’re looking to get the information first before they go and do. I think that was what the scary part was when it was brought to us, that it sounded like it was just going to happen.”

Morgan recognized that board members are also district parents. “I know a lot of them, I know that they ask questions and I know that they care about what happens to the district,” she said.

Board members encouraged parents to contact them with questions and concerns over Facebook, by phone or text.

After the rumor scare, many parents asked the board to keep them posted about meeting discussions and research. Sheinin reminded parents that anyone can attend Board of Education meetings and that meeting minutes and other information is posted on the district’s website.

Syreeta Jackson, district resident, wants full transparency of any ideas or decisions made by Marino, including multiple budget-cut suggestions with relative costs and cost savings, detailed with where and when those numbers were pulled from.

“My major concern would be that we get clear and concise answers as to how they plan to make the change and what are the other options,” Jackson said. “I don’t want to see the community suffer and be upset over decisions that they just don’t agree with.”