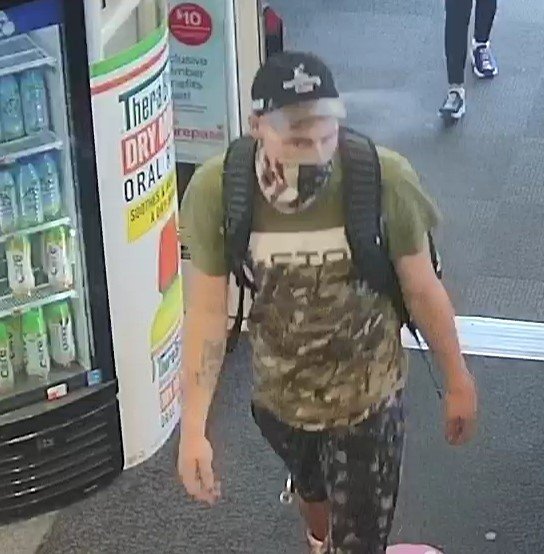 The Inwood CVS on Burnside Avenue was allegedly robbed of up to 30 cans of Red Bull by this man, police said.
NCPD
By Jeff Bessen

A man who has allegedly stolen previously from the CVS at 530 Burnside Ave. in Inwood, allegedly stole up to 30 cans of Red Bull from the store at 5:10 p.m., on Sept. 6, police said.

After entering the store, the man headed to the refrigerated items section as employee recognized the man “as someone that has stolen merchandise in the past,” according to police. The employee said he saw the man put the cans in a backpack and leave the store without paying. When that employee approached the man, the man allegedly shoved the employee with an elbow and left. He got into a gray Toyota sedan. His direction was unknown, police said. No injuries were reported.

He is described as white, 25- to 30-years-old, roughly 5-9 and 180 pounds. He was last seen wearing a green shirt, camouflage shorts, a black hat and red and white sneakers. He was wearing an American flag facemask and had on a black backpack.

Police ask that anyone with information on this incident call Nassau County Crime Stoppers at 1-800-244-8477. All calls are confidential.