Schumer in Woodmere: battling 'a stain of intolerance' 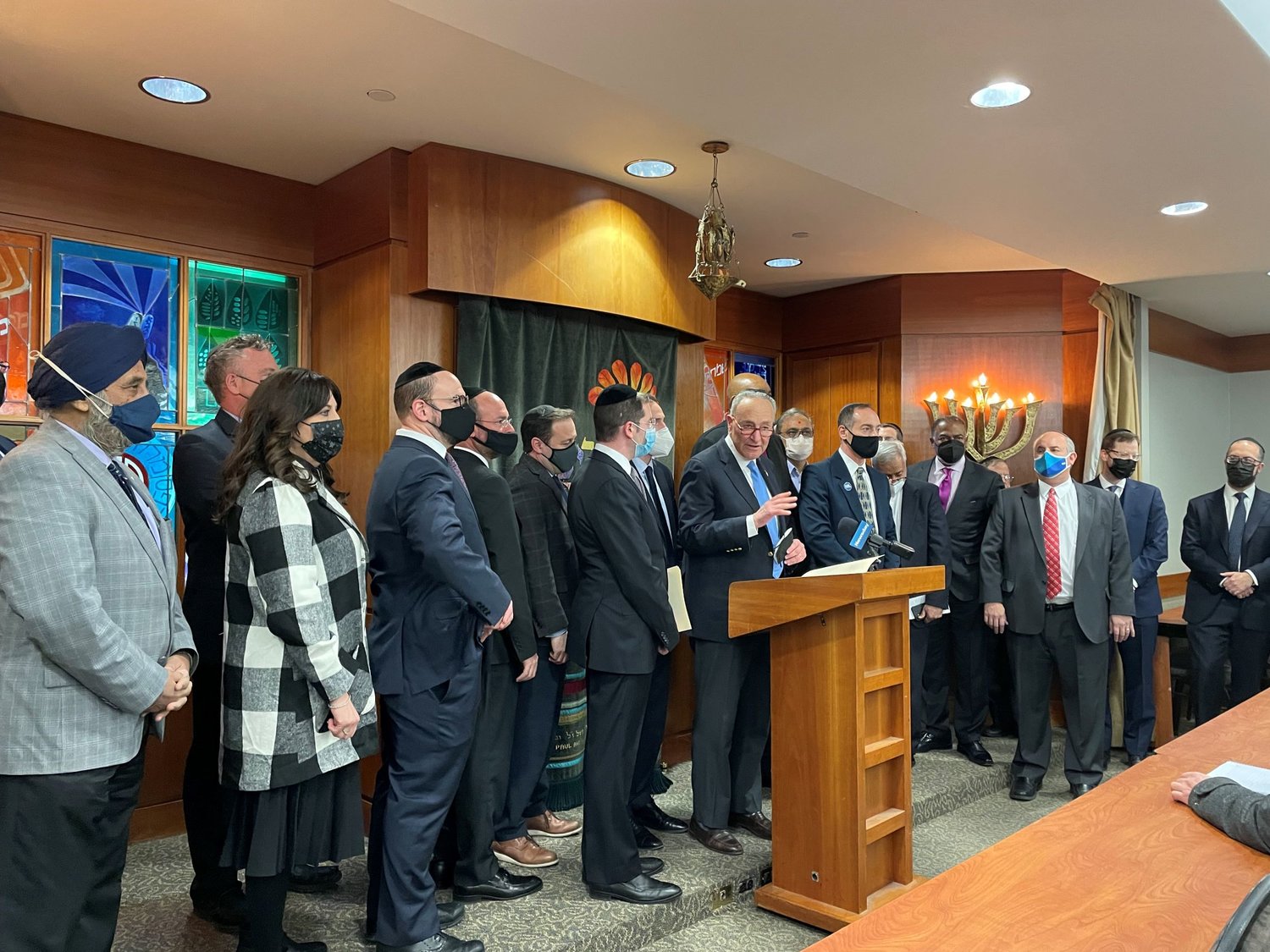 “We live with a type of fear we have not experienced in this country for as long as anyone of us could remember,” said Rabbi Mordechai Kamenetzky, dean of Yeshiva of South Shore.

The money is for nonprofit organizations that are at a high risk of terrorist attack to upgrade the physical security of their buildings. Bollards, cameras and secure doors and windows can be bought with the federal funds.

“Every student, every staff member that goes to any school, whether public or private, deserves an education and a safe environment to learn,” said Ari Solomon, executive director of the Hebrew Academy of the Five Tows and Rockaway.

Schumer announced the push to increase the money amount at Young Israel of Woodmere on Jan. 26, the largest Orthodox Jewish congregation on the South Shore of Long Island, in the aftermath of the hostage situation that occurred at a synagogue in Cooleyville, Texas on Jan. 15. The temple’s rabbi and four other people were taken hostage for 11 hours. They escaped and the hostage taker was killed by law enforcement.

“There is an unease in the air,” Schumer said, speaking of what he called “a stain of intolerance,” that has resulted in an increase of attacks on religious places that he said, “welcome strangers,” but now spiritual leaders and their congregants are “worried about strangers.” He noted that in the last 10 years 600 worshippers, of all religious affiliations, have been killed.

“There is a phenomena that is sweeping our country,” said State Sen. Todd Kaminsky, a Democrat who represents the Five Towns. “We’ve seen anti-Semitic and generally racist and intolerant incidents, and violence skyrocket. We need to do something about that.”

To help ease the fear, Schumer said that the security grant money pot should be $360 million in the upcoming budget up from the current $180 million. It is a program that he originated two years ago, which began with $90 million and that amount was also doubled, a year later.

“We are constantly thinking about what further measures we must take in order to ensure the safety and security of our members, our clients and our staff,” said Gural JCC CEO Aaron Rosenfeld.

Scott Richman, the regional director of the Anti-Defamation League for New York and New Jersey, said that anti-Semitic attacks have tripled since 2013 and his office responds to 30 incidents week. “Our partners in this battle have been elected officials, who have passed key pieces of legislation,” he said. “Our law enforcement, who have helped keep communities safe. Our schools who have worked with ADL, and teach the next generation to respect one another. And, of course civil society, which you see represented here today.”

Less than 1,000 nonprofits that applied for the money have received funds, Schumer said, saying that the process to apply is easy, however more than 2,000 such organization seek help. New York state has received 23 percent of the previous money, including Young Israel of Woodmere. The shul got $125,000 and used the money to hire an outside security company, purchase cameras and other security upgrades.

“With the undeniable uptick of anti-Semitism all over this country, including the recent hostage situation in Cooleyville in Texas, security funding for all faith communities is no longer a luxury, but is now an absolute and urgent necessity,” said Young Israel of Woodmere Rabbi Shay Schacter.