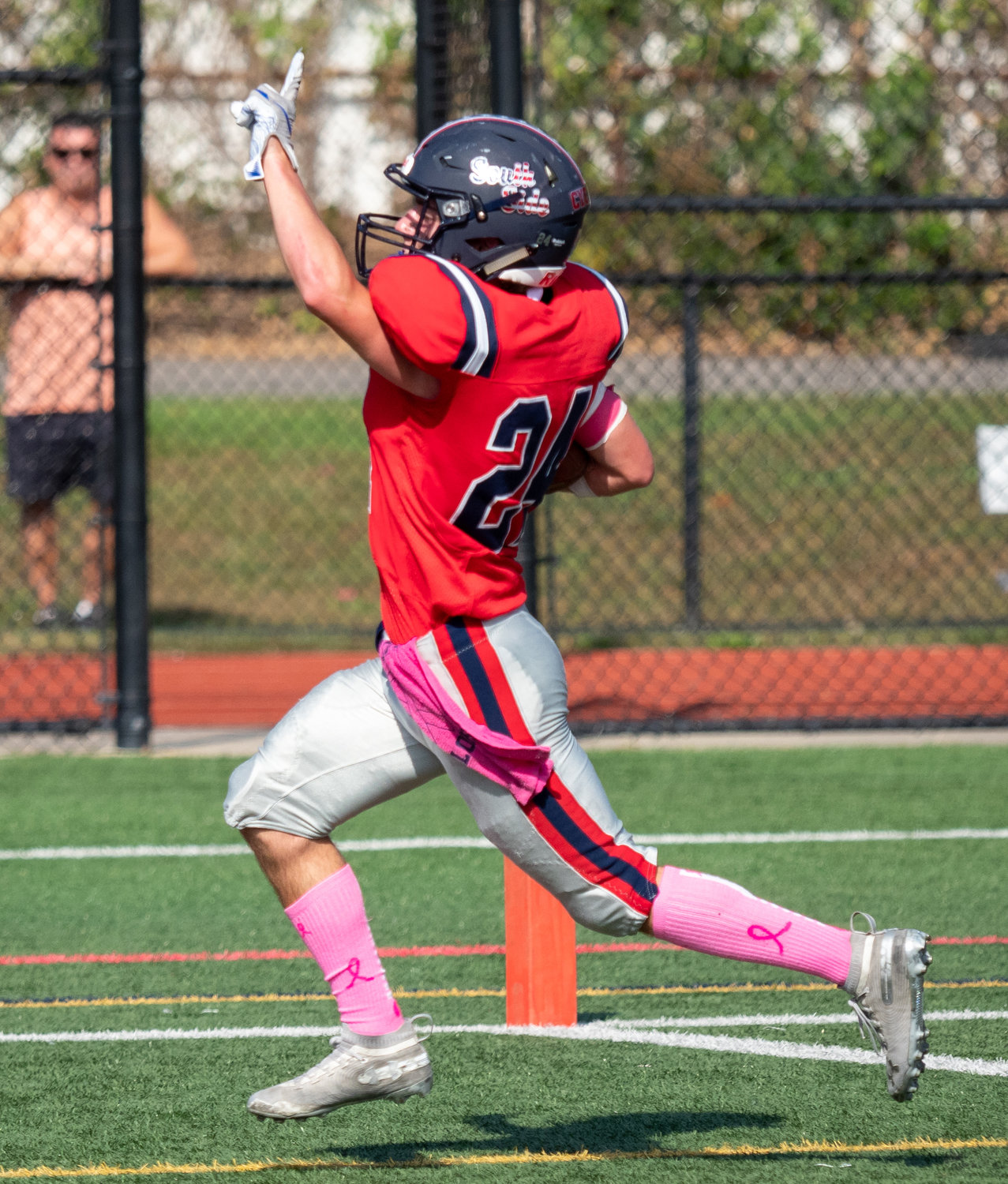 It took all of regulation and two series of overtime to decide last Saturday’s Nassau Conference III football game between South Side and Floral Park.
The pendulum shifted in both directions for the entirety of the game, as there were multiple junctures where each side seemed destined to win. In the end it was South Side pulling out a thrilling 34-33 victory in front of a spirited homecoming crowd.
“I couldn’t be happier for my guys,” Cyclones head coach Phil Onesto said. “We knew Floral Park was a great team, and we were fortunate enough to make one more play than them at the end.”
The final play was a perfect 20-yard lob from sophomore quarterback Owen West to his older brother, senior Brady West. These two were dynamic from kickoff to the final snap, as Owen had 79 passing yards and 94 rushing yards. Brady had 56 receiving yards and two touchdowns, as well as a 25-yard passing touchdown on a trick play.
“I think this win was a combination of everything we’ve been doing,” Brady West stated. “I think we’ve been bringing it every week and we we’ve got our swagger so we’re good to go.”


South Side’s offense did not solely run through the Wests. Running backs Matt Solano and Jack Lozito played crucial parts, as they each had rushing touchdowns of their own. Sophomore receiver Michael Melkonian also was a steady target, racking up 40 yards and a touchdown.
However, it was the ultimate connection between the West brothers that gave South Side (3-3) the opportunity to end it. This pass tied the game at 33 apiece, as in the first possession of the second series of overtime, Floral Park running back Matt Ollen took a direct snap up the middle for a touchdown. However, the extra point was unsuccessful, which is why the Cyclones had the opportunity to win it after the touchdown. Sophomore kicker Nick Papadopulos stepped up and confidently nailed his walk off extra point.
“I’ve kicked that a thousand times in practice, so when I walked up there I knew I had it,” Papadopulos said.
The Cyclones managed to pull out the victory despite a valiant comeback effort by Floral Park. South Side led 14-0 at halftime, in large part due to its special teams, as it was able to recover two onside kicks. However, the Knights were reinvigorated in the second half.
Floral Park quarterback Chris Nardonis did it both with his arms and legs, as he threw a 33-yard touchdown to Ollen and also ran for a 9-yard touchdown in the second half. It seemed that the comeback was fully coming to fruition late in the fourth quarter, when running back Chase McLaughlin ran untouched for a 39-yard touchdown and Nardonis added the two-point conversion to tie the game at 27.
Brady West picked off Nardonis on Floral Park’s first OT possession after the Cyclones failed the score on theirs.
South Side will try to get over .500 for the first time this season when it travels to Roosevelt this Saturday for a 2 p.m. kickoff.