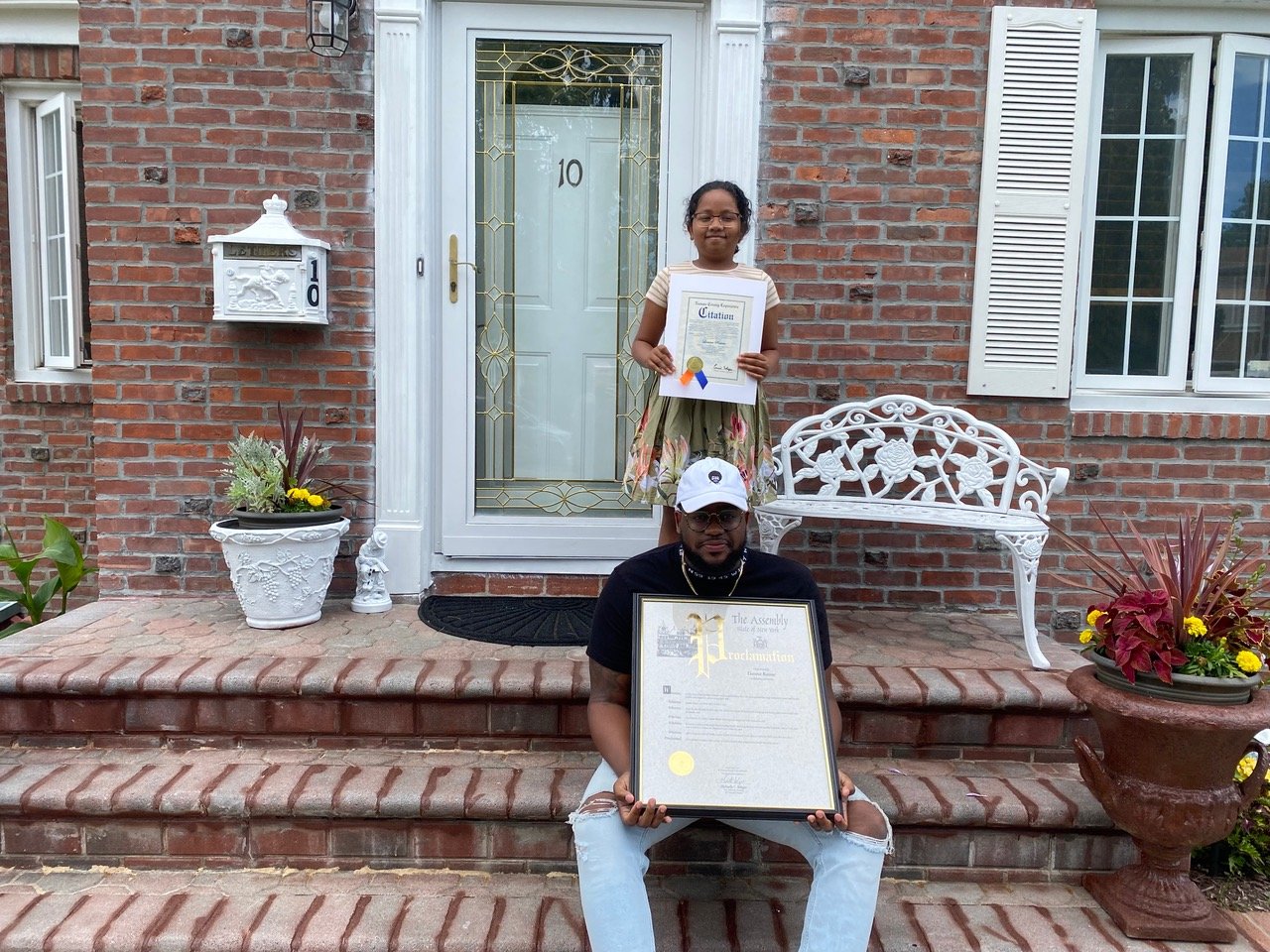 Lianna and her father at their Elmont home, where State Assemblywoman Michaelle Solages and her brother, County Legislator Carrié Solages, presented her with a proclamation honoring her for the strength and courage she displayed during her struggle with leukemia.
Robert Traverso/Herald 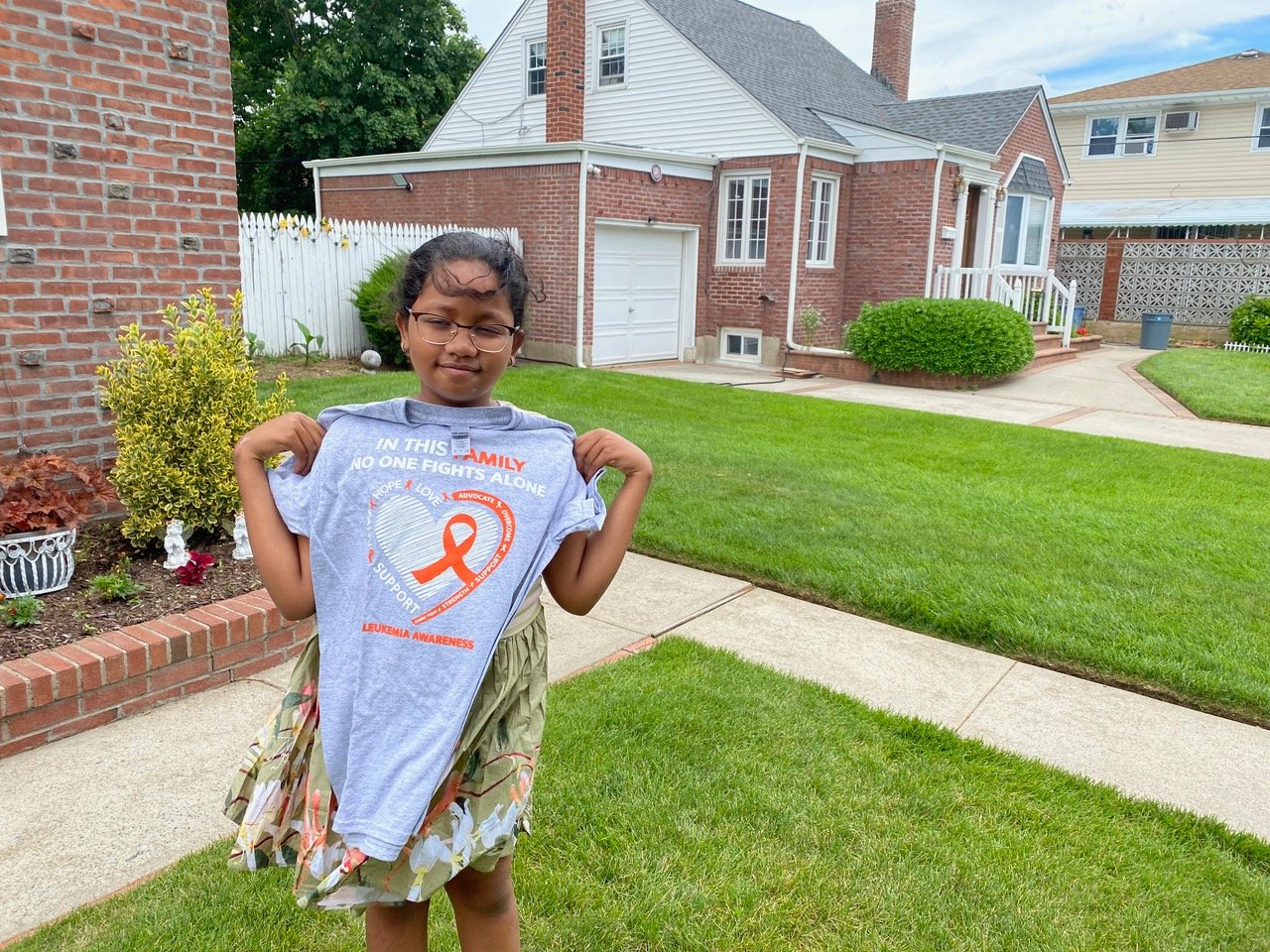 The Raime family, Lianna’s grandmother Michelle explained, had T-shirts made to express support for Lianna that bear the motivational phrase “In this family, no one fights alone.”
Robert Traverso/Herald
Previous Next

If I can do it, you can do it, too”
Lianna Raime, Leukemia survivor
By Robert Traverso

For the first 18 days of her hospitalization following her leukemia diagnosis at age 9, Lianna Raime, of Elmont, developed a routine. She would sit on her hospital bed, gaze out the window and tell herself she wouldn’t stay in the hospital forever, and that she would be able to go outside again one day.

Today, Lianna is cancer-free and thriving.

“She knew the end goal,” said her father, Jonathan Raime. Lianna believed deep down, he said, that she would beat cancer, and that positive mindset was key to her recovery.

“She knew that I had her back, she knew her family had her back, and knowing all that information helped her get through it … it was her mind,” Jonathan said, describing as key factors her positive mindset, support from her family, and the choice he and his daughter made to educate themselves about leukemia and its treatment.

Lianna said that this knowledge, which helped her see that she was getting better, and the idea that she would ultimately be OK powered her through her struggle. “Even though this might be scary, if I can do it, you can do it too,” she said while thanking her doctors and nurses at Cohen’s Children Hospital.

The confidence that Lianna and her father shared wasn’t evident from the start. Jonathan, 31, who works for Moody’s Investors Service, said he was lost when Lianna was diagnosed until his aunt, a doctor in Georgia, stressed the need for Jonathan to educate himself about the disease and how to treat it.

He set out to do just that so he could understand Lianna’s battle and explain it to his family, which helped them all cope with the circumstances. But despite his effort, Jonathan said, he had moments of hopelessness, particularly when chemotherapy medications had negative effects on Lianna.

“This too shall pass,” a doctor at Cohen’s Children said early in her stay, and Jonathan took that to heart. “As long as it’s going to pass, she’s going to be better and more healthy,” he said. “That’s all that mattered to me, and that made it better.”

‘Father of the century’

Lianna, a third-grade student at Dutch Broadway School, said that her father’s support was key to her recovery. “He’s the father of the century,” she said.

“He would take his daughter in one hand, the laptop in the other hand and stay in that hospital room,” Jonathan’s mother, Michelle Raime, recalled of her son, who often took Zoom calls at the height of the coronavirus pandemic so he could sit with Lianna while she received treatment.

Michelle often saw sadness on her son’s face, she said, but he never showed that side to his daughter. “Not one day did I see his face when he was with his daughter did I not see him smile,” Michelle said. “It’s like he took all the pain and he put it on the backburner and put on a strong front, a happy face.”

Jonathan credited his friends and family, but cited his faith as most important in helping Lianna and himself. “Through prayer, through God’s grace, we made it,” he said.

As it happened, he said, he wasn’t very spiritual before Lianna was diagnosed, but prayer calmed him down and made him strong enough to take his daughter to her treatments. “I had to be there and be strong for her,” Jonathan said.

Michelle said that Lianna’s family worked hard to make every day happy, filled with positive thoughts and vibes. “We as a family have a strong support team,” she said.

Jonathan advised parents helping children through struggles with cancer to educate themselves and lean on family. “Through prayer and family, it will make the journey a little less painful,” he said, “and it will pass. It’s not a forever thing.”

Lianna, healthy and happy on June 23, when State Assemblywoman Michaelle Solages and her brother, Nassau County Legislator Carrie Solages, presented her with a proclamation honoring her, revealed that she would be named part of the principal’s honor roll at Dutch Broadway.

Her joyful personality Lianna has adopted can conceal all she has been through, but those who know her story know how much she has overcome. “You see a young girl who’s bubbly and happy,” Assemblywoman Solages said, “but you don’t know the pain she had to endure to overcome cancer.”

Lianna said she wants to be a baker or a chef one day and to own her own bakery or restaurant.

“Even the youngest person can go through these traumatic events,” Solages added, “and still come out better and stronger."