‘The marks remind me of my strength’

Elizabeth Forbes is the Person of the Year 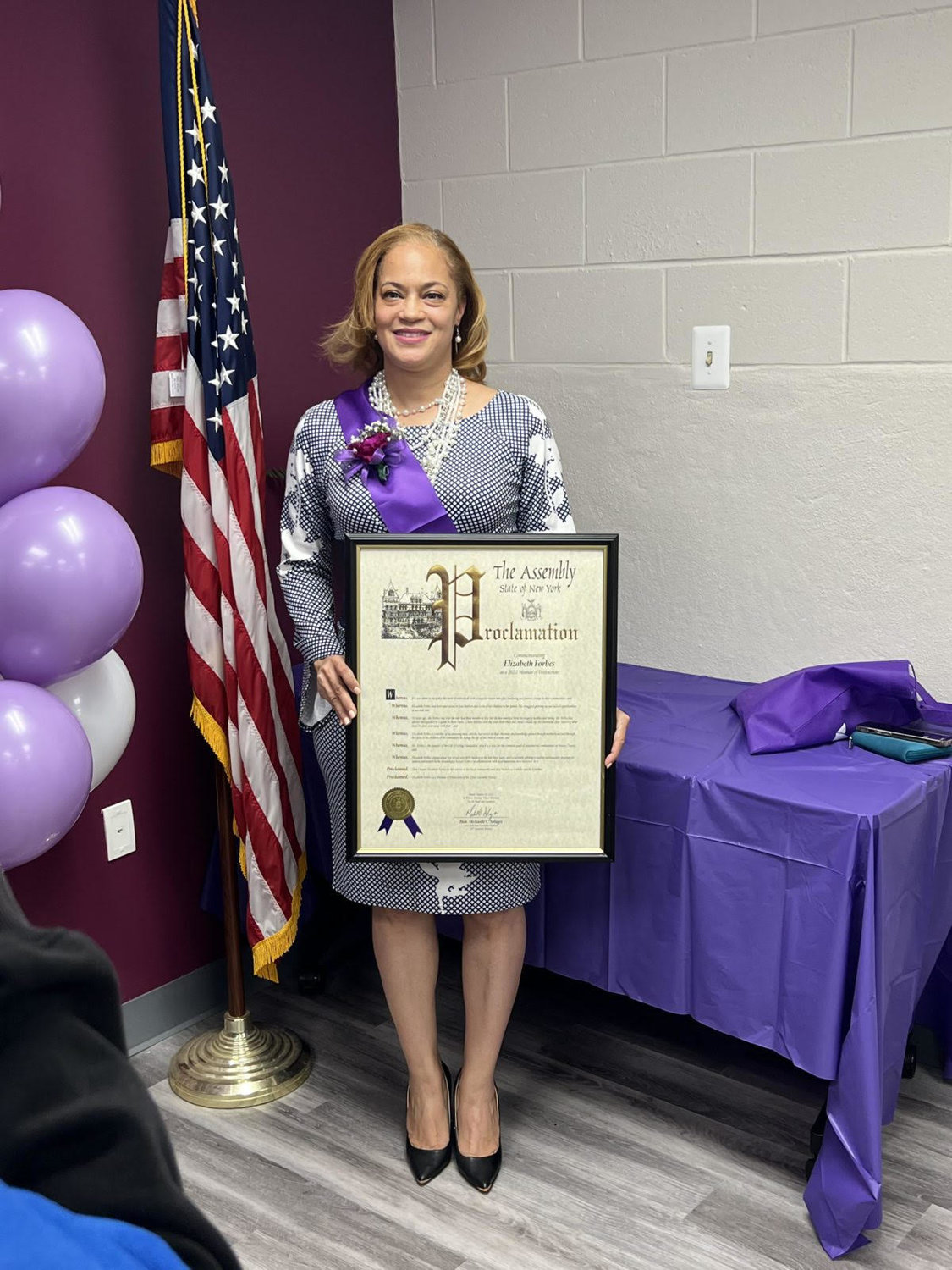 Forbes was one of eight women honored for helping to bring about positive change in their communities with a Women of Distinction award. The ceremony was held at the Franklin Square Public Library in October.
Courtesy Elizabeth Forbes 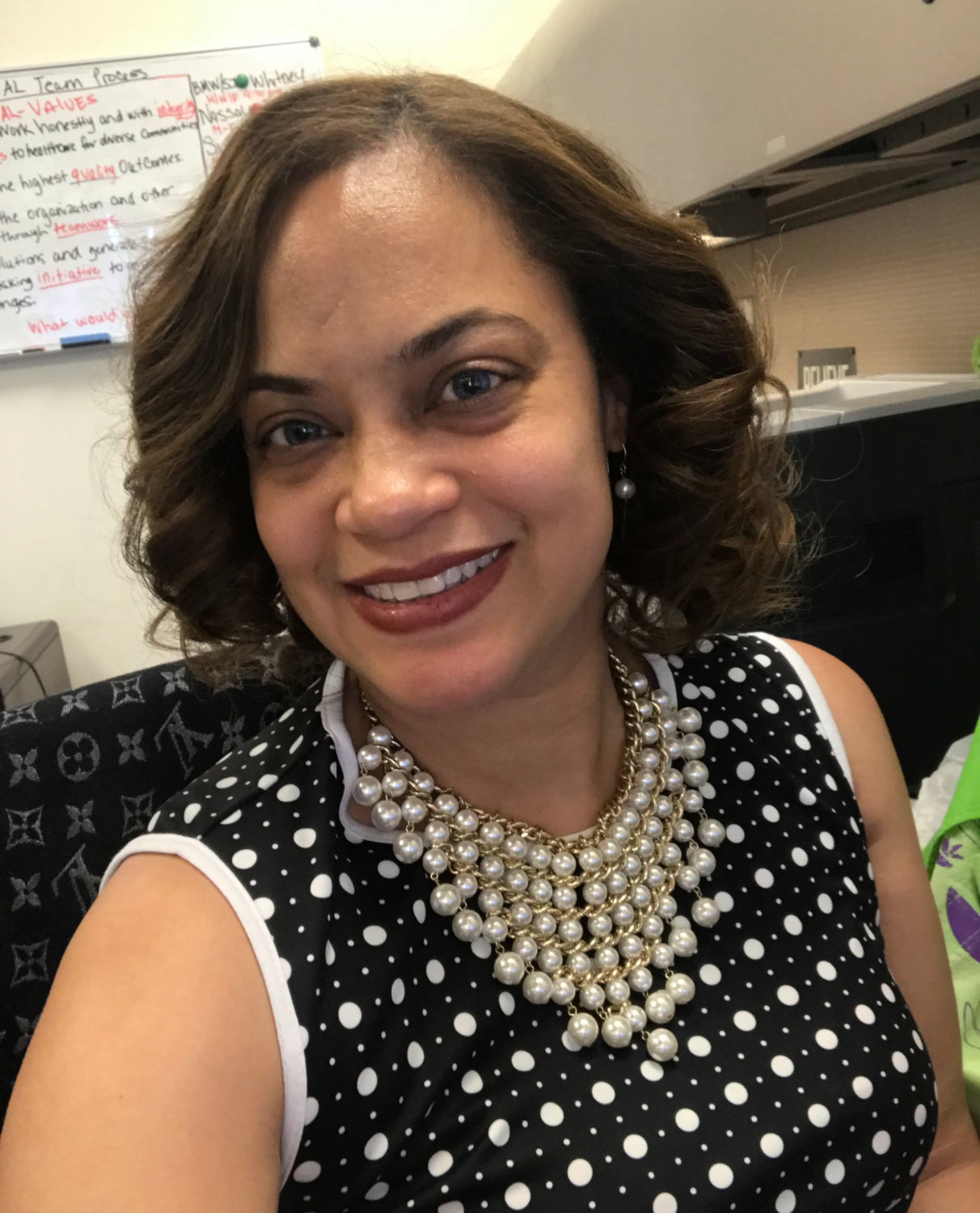 'I just feel like the world is ours to give back to the future generation.'”
Elizabeth Forbes, founder of the Gift of Giving Foundation
By Ana Borruto

Elizabeth Forbes is a fighter. When you meet her, you wouldn’t know the many trials and tribulations she has overcome throughout her life.

She doesn’t share her personal story often. She focuses on shining the spotlight on those in the Elmont community in need through her Gift of Giving Foundation.

“I never want a child to feel neglected of love,” Forbes said. “My mission is to really change the lives of children — one child at a time.”

For her dedication to that mission, the Herald is proud to name Forbes its 2022 Person of the Year.

Forbes was one of 11 children – eight sisters and three brothers –raised in East Harlem and grew up in a protective household. She recalled her mother always keeping a watchful eye over her and her sisters. However, at times, she was allowed to go out and explore her neighborhood, where she created some of her most exciting childhood memories.

Forbes and her sister, Kathy, were the “two bandits” of the family, she said. When she was 10, they entered a double-dutch jump rope and roller-skating competition, just for fun at first, and the two ended up winning both contests.

“It was just so amazing and I think a lot of the things that I wanted to do come from what I experienced there,” Forbes said.

When she was 13, her family moved from Harlem to Queens and unfortunately, the family dynamic shifted. The man who raised her was not her biological father, she said, and although she did not understand the situation as a child at the time, looking back, she felt as if he was trying to “get rid” of her because she was not his.

“One time, he beat me so bad that even to this day, I still have the marks on my back,” Forbes said. “The marks remind me of my strength and courage.”

The following day, the school reported the incident to Child Protective Services and Forbes was taken out of her home. For the next two years, she was in and out of different homes, until Shirley and Newton Virgil of Freeport took her in at age 15.

Shirley, who has since passed, was heavily involved in the Freeport community volunteering for various organizations such as the Cub Scouts, the Freeport Recreation Center, Archer Street Elementary and Atkinson School.

“Mama Shirley” grabbed a quiet Forbes by the hand and introduced her to civic service and volunteerism – an exposure that completely changed the trajectory of her life.

“When I tell you this woman shaped me, molded me, she did so much and I was right there with her,” Forbes said. “She taught me the importance of giving back to the community and from that point on, I realized that that's what saved my life.”

Forbes went on to attend Hofstra University and received Bachelor in Science in healthcare administration. She contemplated what she wanted for her life. She moved forward from her horrific past experiences and broke the toxicity she endured by starting her own family.

She left Freeport and moved to Florida for a short time, but her heart always stayed in New York. She returned a year later where she met her husband Rex, who stepped in as a father figure to her three sons and they had two more children together.

Forbes was living her dream life until her health took a turn. Her weight dropped to an alarming 69 pounds, her hair was falling out and she couldn’t keep food down. After several misdiagnoses, she was hit with crushing news.

At 35 years old, she was diagnosed with stage four esophageal cancer and was given three months to live. She received that prognosis 10 years ago.

“Three months later they did another PET scan and put both scans side by side – no sign of cancer,” Forbes said. “I was fighting through a lot and I couldn’t get out of bed. The Creator had done so much work for me in those three months.”

Her oncologist told her she was a “miracle.” With a second chance at life, Forbes discovered her true purpose of giving blessings back to others.

That is when her nonprofit came into place.

Since its inception, the Gift of Giving Foundation served over 800 children throughout Nassau County through scholarship programs, toy drives, food giveaway events and other community initiatives.

When Forbes was putting together her inaugural event in 2019, she reached out to Assemblywoman Michaelle Solages for guidance. The first holiday event for the Gift of Giving Foundation was held at Elmont Memorial Library. Since then, Solages has remained a loyal supporter for Forbes’ mission.

Forbes is involved with Solages’ annual Winter Wonderland event as well where they distribute free toys to children. Solages credited Forbes for enabling her team to take the event to new heights and bring more smiles to kids’ faces during the holidays.

“I love Elizabeth’s story because it’s not a perfect story. It’s a story with challenges and difficulties that she’s always overcome,” Solages said. “And it’s important because you need to make sure you show people that even though you can take what life throws at you, take it back, and multiply it into love and happiness.”

Forbes and her team also piloted the Student Ambassadors Program for local high school juniors and seniors in collaboration with neighborhood business owners. She hopes to continue to run this program at least three times a year. The next project Forbes wants to get off the ground is having high school students visit senior living facilities to spend time with the elderly residents.

Whether it’s giving a child toys for Christmas or giving teens the opportunity to grow professionally, there have been multiple instances where young people have approached Forbes to let her know the positive impact she has made on their lives.

Jessica Brown, director of the Elmont Student Ambassadors Program and Forbes’ niece, said she is lucky to have Forbes as an inspiring role model in her life.

“She’s so giving, she’s always helping people and all the kids treat her as if she’s their own mother,” Brown said. “It’s just so beautiful to me and it makes me very proud to call her my aunt.”

Outside of her work with Gift of Giving, Forbes has an open-door policy in her household. She often invites groups of young people over for a meal and hosts game nights in her living room. Many refer to her as “Mother Hen,” she said.

Javen Duff, who Forbes deems as her “bonus child,” said Forbes is uplifting young individuals living in Elmont through her foundation.

“Elmont being a predominantly Black community, there’s not a lot of opportunities to learn business and learn how to further their future,” Duff said. “I feel like she's opening the doorway to do that.”

Forbes said if she can make someone feel accepted, cared for and a little less alone in the world, she has accomplished what she feels she has been put on this Earth to do.

“[The ultimate gift of giving] is healing someone’s soul — giving them love, giving them joy, a hug or a hot meal, it’s always that little gift that makes such a difference,” Forbes said. “As a mom, as a survivor, as someone in the community, I just feel like the world is ours to give back to the future generation.”