A heroic and happy life 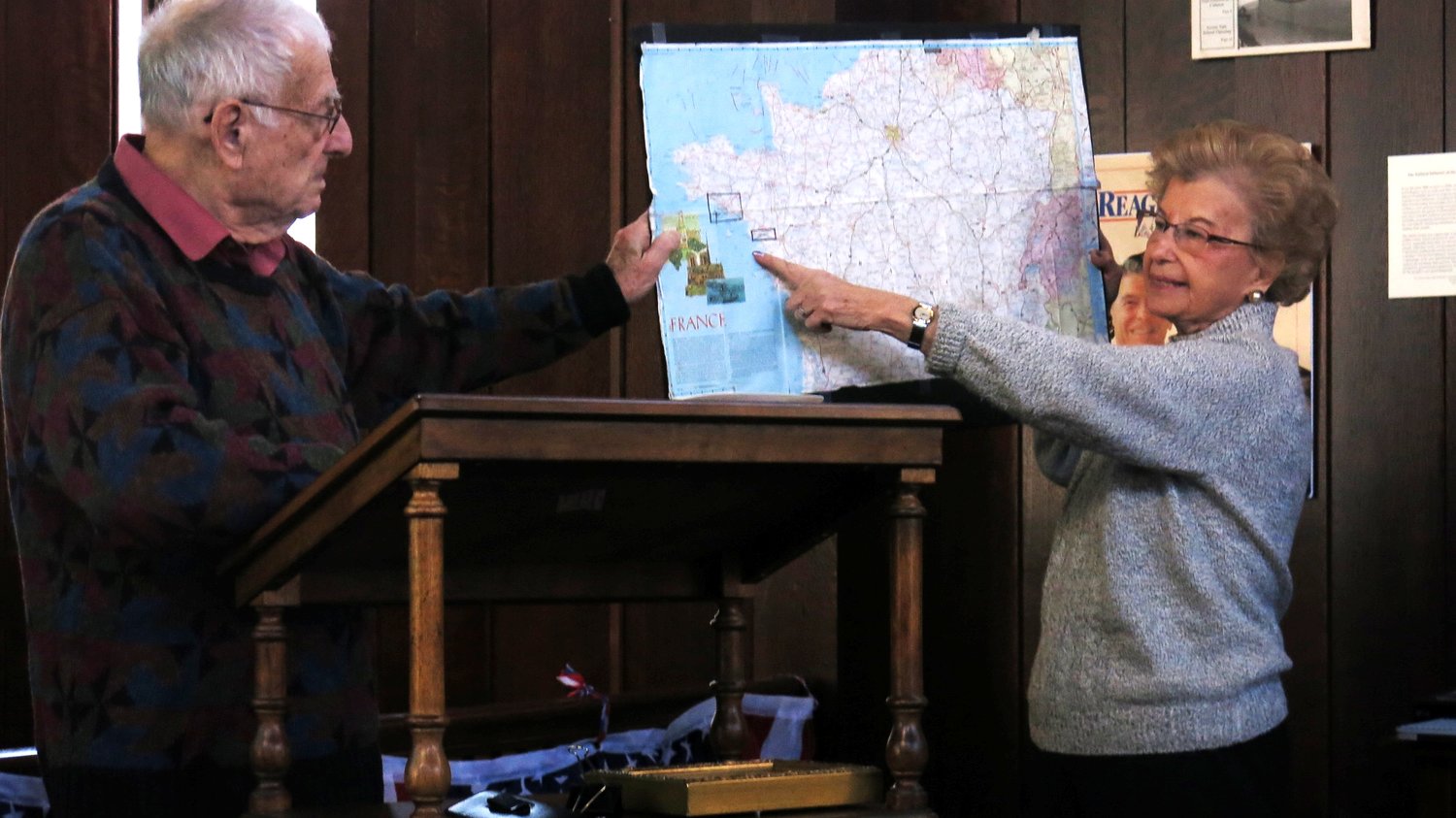 Bernie Rader, assisted by his wife, June, shared the story of his capture during World War II at the North Shore Historical Museum.
Laura Lane/Herald 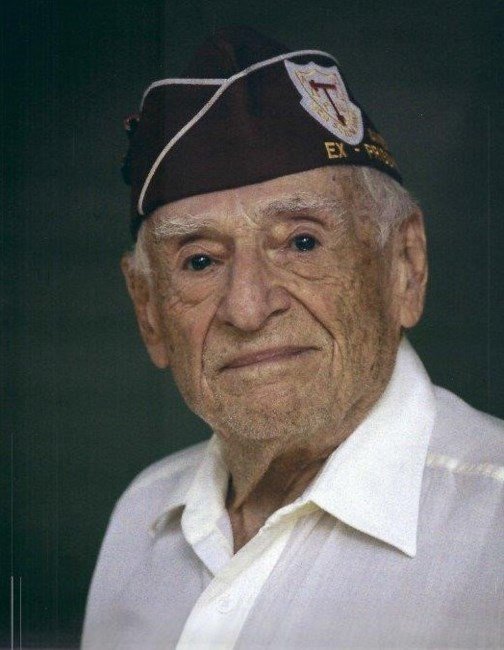 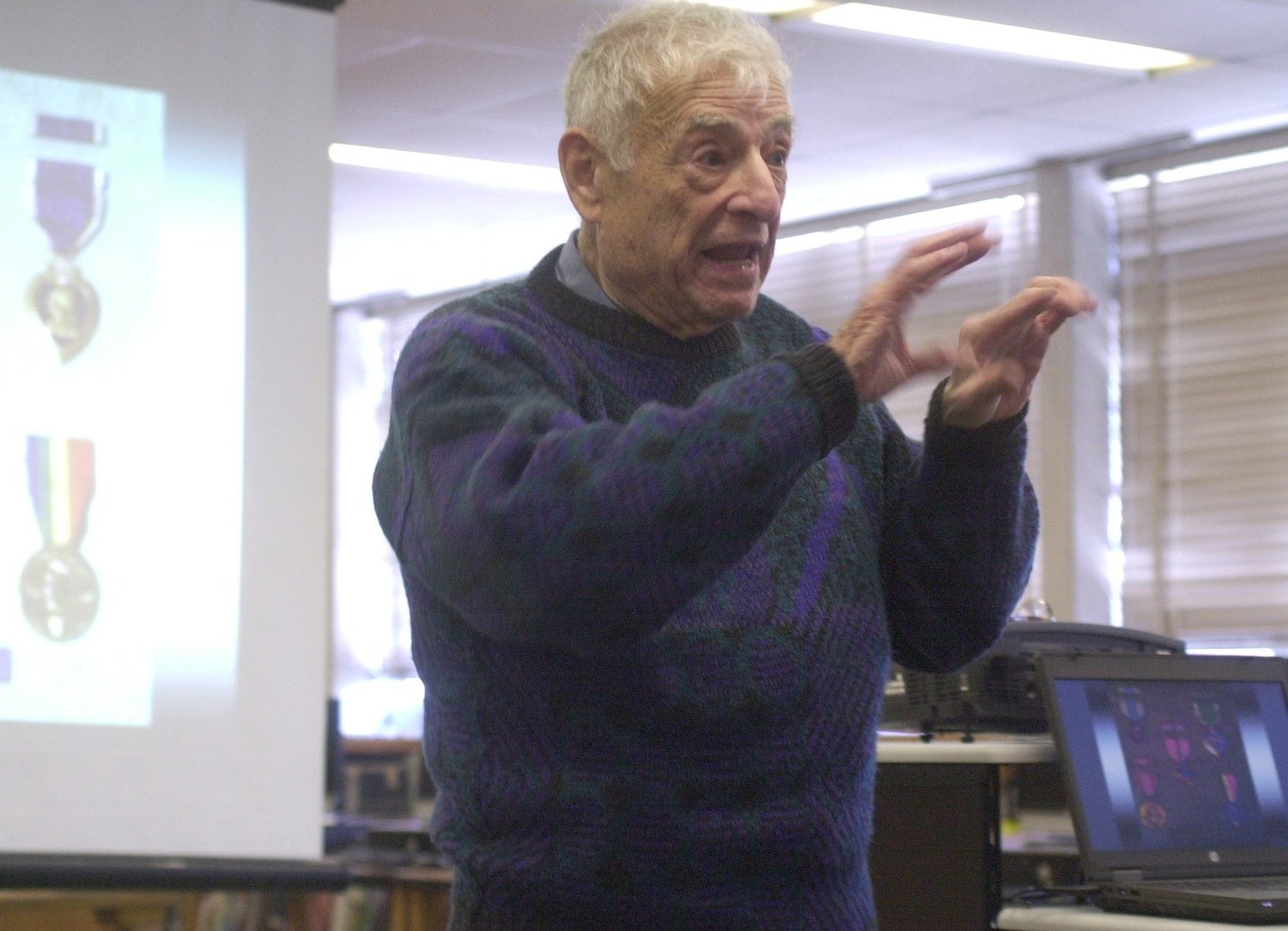 Bernard “Bernie” Rader was drafted in 1943, during his second year at City College in New York. He became a Private First Class in the 94th Infantry Division and fought near Lorient in France, where his unit was ambushed. He was wounded and a captive of the Germans for 47 days, after which he was exchanged in one of the few prisoner of war exchanges on the Western Front, owing to the courageous deal brokered with the Germans by Andrew Gerow Hodges. He received the Bronze Star and the Purple Heart for his service. In 2007, he was honored by French President Nicolas Sarkozy with the French Legion of Honor, the nation’s highest civilian award. (Text taken from the obituary of Bernard Rader on the website of Hewlett Boulevard-Riverside Chapels.)

Andrew Gerow Hodges (1918-2005) joined the American Red Cross in World War II with the assimilated rank of captain and was assigned to the U.S. Army's 94th Infantry Division as a field director of the Red Cross in the European Theater of Operations. Hodges personally took responsibility for crossing 15 times, alone and unannounced, into Axis-held territory to take relief supplies to Allied prisoners of war. Recognizing that it would be easier and better for both sides to care for their own men, Hodges proposed an unprecedented prisoner exchange that resulted in the liberation of 169 Allied prisoners. For his courage and service, the U.S. Army awarded him two Bronze Stars, the highest military decoration available to a civilian. (Text taken from Samford University Men’s Hall of Fame)

When 98-year-old Bernard Rader died on Dec. 23, he left behind a legacy of World War II heroism, active community involvement and uncompromising love for his family.

When Rader was a 19-year-old Brooklynite signing up for the U.S. Army in May 1943, he was already deeply committed to his country. He was Jewish, and fully conscious of Hitler’s dire threat not only to freedom worldwide, but specifically to Jews. He became a soldier to defeat that existential threat.

For an American Jewish man to take up arms in World War II was especially daring because American dogtags showed each soldier’s religion.

“There was a P for Protestant, an H for Hebrew or Jewish, and C for Catholic,” said June Rader, Bernie’s wife of nearly 70 years, “so they would know how to bury them if they were killed in action. Bernie’s unit was in an ambush with the Germans in France, and they had a six-hour battle, a very fierce battle, and they were taken prisoner (see Box 1). He realized that if the Germans found out he was Jewish, they wouldn’t treat him the same as the other prisoners, so he asked his friend [George Boyd] to bury his dog tags, and his friend did.”

After his imprisonment in a German POW camp, and his  eventual release through deal made by a Red Cross chaplain, (see Box 2), Rader continued active duty. He re-entered the civilian world in January 1946, and applied his strong principles of honesty, patriotism and family unity to his life path. He became a certified public accountant and worked as a partner with his CPA father for more than 35 years. In 1949, he started his permanent romance with June.

“We were married in 1952,” June said. “We have three children, all married, seven grandchildren and three great-grandchildren. In Freeport, we lived on King Street for nine years, and then in 1968 we moved to our current house on Wilson Place.”

“Our kids all went to the Freeport schools,” said June, 91, who still drives and is “getting used to” living alone in her house. “My oldest son, Robert, is now executive director of all the school boards in Connecticut. My daughter, Lauren, is an artist who wrote a book about teaching women art. My youngest son, Andrew, is a lawyer in Florida.”

While June did bookkeeping part-time and tended the children, Bernie became president of the Nassau County CPA Society and was Secretary of the New York State Society of CPAs. Congregation B’Nai Israel became their lifelong spiritual home. Bernie was treasurer of the Long Island Arts Council at Freeport for years. He also belonged to William Clinton Story American Legion Post 342, and maintained membership in the Jewish War Veterans from his return after World War II until he died. For the last seven years, his membership was at JWV Post 652 in Merrick.

“We traveled a lot while he was working,” June said, “and after tax season we took three weeks off every year and went to Europe. We went to a lot of different places. We had a very happy life.”

When he retired in 1991, June retired too, and together, they started an entire second career.

“The two of us went to high schools, libraries, churches, synagogues and had programs that we presented to all those people,” June said. “We did it about 350 times, telling them the story of how he was a POW and he was exchanged during the war. He always ended the program by saying, ‘You have to do something for your country. You don’t have to join the army, but you should go into Habitat for Humanity, the Peace Corps, something.’”

The Rader offspring spoke movingly of their father and grandfather at the live-streamed Dec. 27 service Hewlett Boulevard-Riverside Chapels.

“He pushed all of us to be honest and have strong ethical principles,” Robert said. “To me, this connection between what he and the Greatest Generation had done, and the students of today, and his eagerness to encourage other veterans to tell their story, is what made him a hero in my life.”

“More than anything, he taught me how people truly can change and grow over time,” Lauren said. “When my dad was 75, he had a stroke. He lost his words and fought like you can’t even imagine to get them back, but it was hard. After his stroke, he softened and became a more empathetic man. My dad taught me about forgiveness, and that love is to be shared openly and often.”

Andrew said, “My mother’s unflinching care for my dad – how they provided for one another, each in their own way, over a nearly 70-year marriage – was a beautiful and inspirational master class in how to move into senior years with grace.”

“I think he knew that his legacy of a loving happy family will live on,” said David, the oldest grandchild, himself a young father, “and that gave him a sense of deep and true satisfaction. Gramps, you showed us all the way, and we’ll take it from here, so you can rest in peace.”