A thousand jackets for the needy 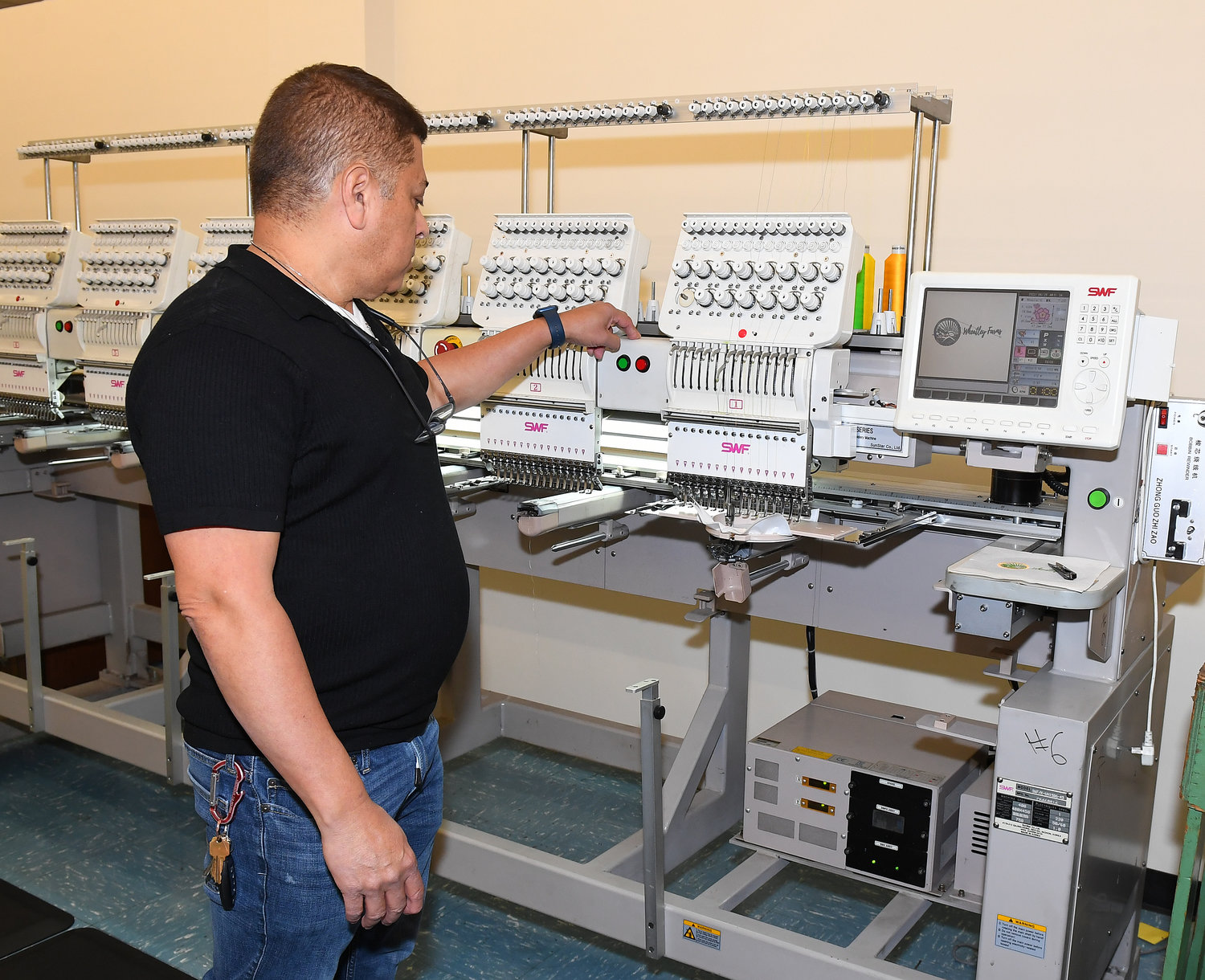 Devinson Sanchez demonstrated the complex embroidery machines with which AHRC will develop a new business line.
NEIL MILLER/Herald
Previous Next

I really want to thank AHRC for its extraordinary partnership throughout this project.”
Anne Donnelly Nassau County district attorney
A linchpin in the project: Special Investigator William Gillespie

“He was ‘Billy’ to us,” Donnelly said. “He was one of the lead investigators on our first seizure [of counterfeit jackets]. Billy himself would often move jackets that were ready for donation back and forth to storage areas, and he helped rally the other investigators to participate. We wouldn’t be here today without his efforts.”

Police Commissioner Patrick Ryder added, “By the end of the day, this is the work of Billy Gillespie. This is what great detectives do, great investigators do, and great people do.”

But this ending was really a two-pronged beginning.

It was the beginning of the continued recycling of forfeited goods by the district attorney’s office to benefit the needy. It was also the beginning of a new business line for AHRC Nassau, which has operated the work center in Freeport for half a century.

The ending of the jackets project was celebrated April 28 with a news conference at the work center. District Attorney Anne Donnelly, Assistant D.A. Rene Feichter, Police Commissioner Patrick Ryder and AHRC Executive Director Stanfort Perry convened with charitable partners and other officials at the AHRC warehouse, where they loaded the last 1,000 jackets into SUVs.

Six hundred jackets were headed for St. Finbar’s Roman Catholic Church in Brooklyn, where Knights of Columbus members were preparing a humanitarian shipment to Ukraine.

The other 400 jackets would go to the NCDA Community Partnership Program and the Long Island Council of Churches.

The remarkable saga began in 2015, when state forfeiture laws were amended to allow for counterfeit items, like clothing or jackets, to be donated to charity after proper safety testing and with the permission of the company that was the victim of the counterfeiting.

Prior to that change, such items would have been destroyed.

“It’s not the end of this six-year journey, it’s just the beginning,” Feichter said opening the news conference. “Because there will always be bad guys doing counterfeiting, driving up prices, making it hard for the poor to afford things, but we’re going to stop it. We'll be turning bad into good.”

Donnelly described the journey as beginning just days before Christmas 2015, when the D.A.’s office executed a search warrant at a Hicksville warehouse with its partners in the Nassau County Police Department, U.S. Customs and Border Protection, and Homeland Security Investigations.

The warehouse held hundreds of boxes containing about 50,000 counterfeit winter jackets worth $2 million on the

street, Donnelly said. Over the next two years, another 48,000 jackets were recovered from locations in Westbury and Old Bethpage.

“We quickly realized that we had nearly 100,000 jackets that were destined for the incinerator,” Donnelly said, “but we wanted to do something about that.”

Four industrial-sized embroidery machines had been seized with the jackets. Under the amended law, all of these could be donated to charity. However, laws for evidence storage complicated the planning.

Feichter, other county prosecutors, and members of the NCPD partnered with charitable organizations to work out the logistics of storage, embroidering over the logos and labels on the jackets, sewing plain patches over the now-indecipherable embroidery, cleaning the jackets and packing them for distribution.

Among the partner organizations were Spectrum Designs and AHRC Nassau, both of whom provide social services and job opportunities for people with disabilities.

Stanfort J. Perry, executive director of AHRC Nassau, summarized the project’s benefits for the people that AHRC serves. “The district attorney’s office welcomed AHRC Nassau into this project in 2018,” Perry said. “We received 13,000 jackets and two embroidery machines, and we took it from there. We obtained training needed for our staff so that working on these machines could be an option for employment.”

According to Perry, over the course of three years, people with disabilities provided hundreds of labor hours, learning an employable, transferable skill, while knowing their efforts would help members of the community who were not as fortunate.

“I really want to thank AHRC for its extraordinary partnership throughout this project,” Donnelly said. “We wish them the best of luck as they continue to expand their businesses and add embroidering into the fold.”

She added that the defendants paid for the safety inspections of the jackets as part of their pleas, so the cha

charities would not have to foot that bill.

Devinson Sanchez, the team leader for the project at the Hanse Avenue work center, led the training on the embroidery machines. He also organized individuals from AHRC’s pre-vocational program to do the label removal and packaging.

After the conference, Sanchez demonstrated how the machines worked in the roomy, well-lit work area. Watching him, Barry Donowitz, associate executive director for AHRC Nassau’s Administration and Central Services, commented, “We were thrilled to partner with the D.A.’s office, both to provide volunteer opportunities for people that make a difference to the local community, and also to begin a new business to add to AHRC’s array of businesses in landscaping, commercial cleaning, catering, and greenhouse services.”