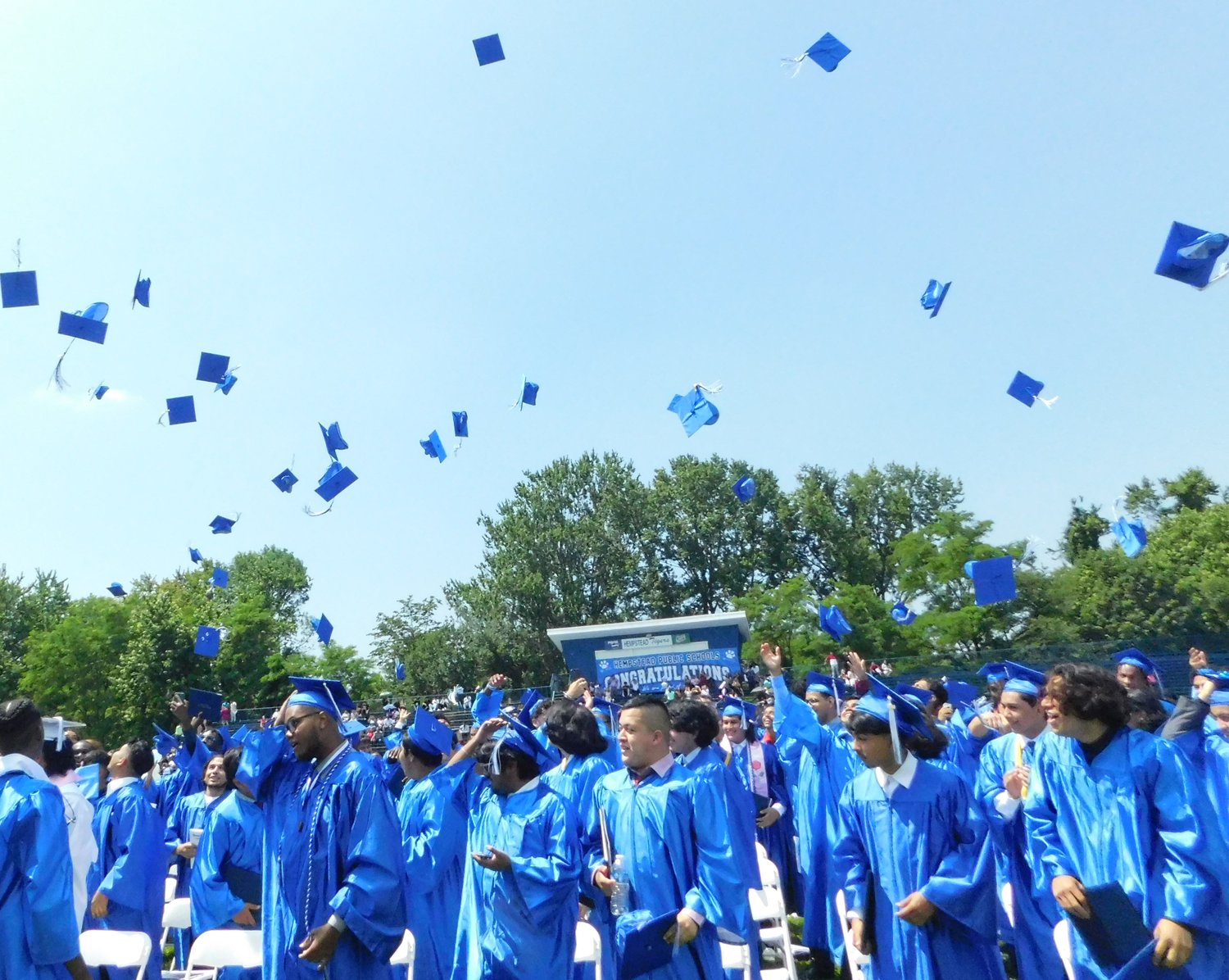 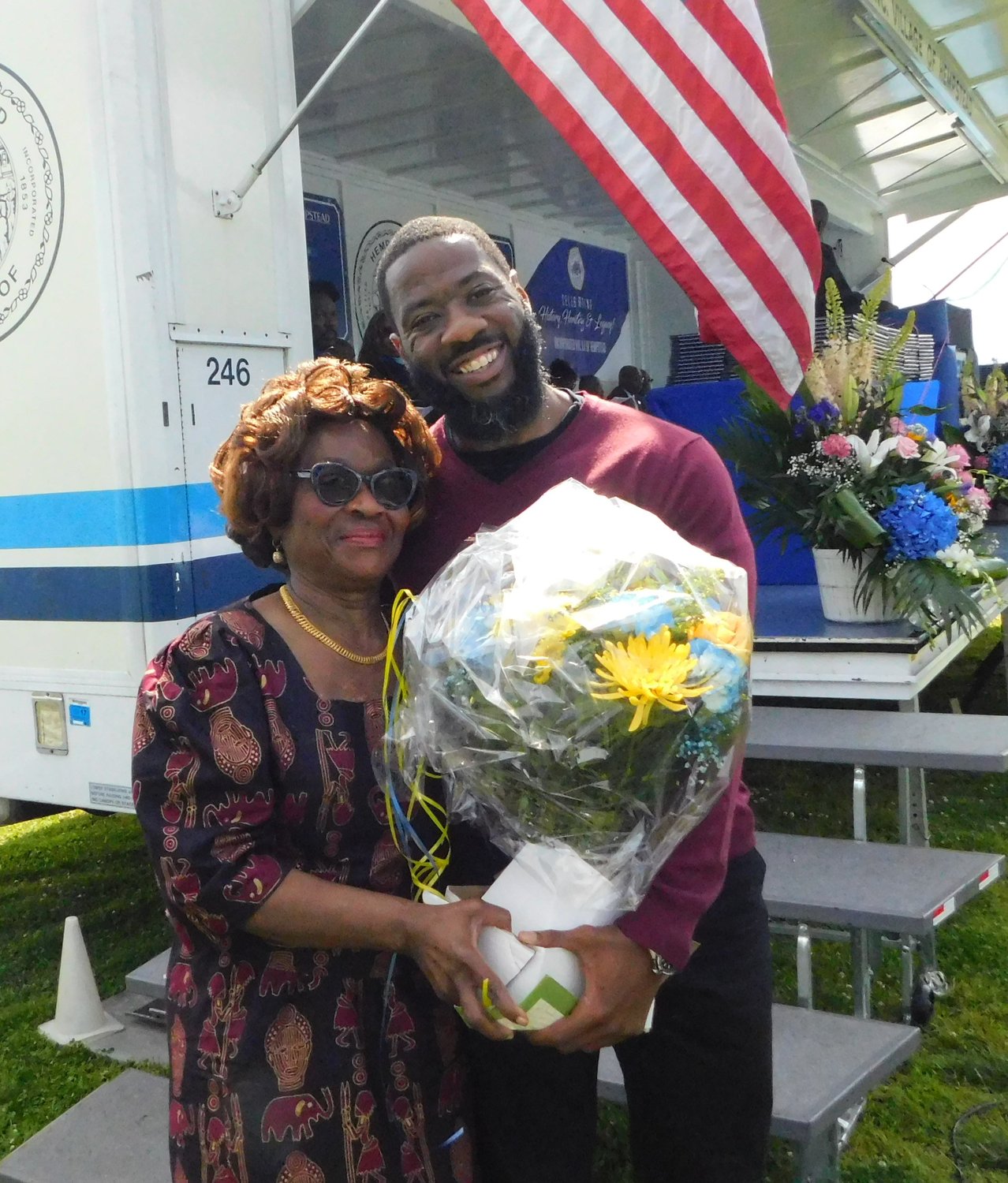 The smiles of victory at the Hempstead High School graduation shone even more brightly than the strong sunlight pouring down over the graduates at the ceremony on June 24.

Families, friends, and caregivers shouted, cheered, and applauded from the bleachers of the Hempstead High football field while their loved ones received their diplomas.

Not least among the proud family members were Elianne Antoine and Christopher Jean-Pierre, the mother and brother of Hempstead High graduate Karine Jean-Pierre, who at age 47 recently became the White House press secretary for President Joe Biden.

Elianne and Christopher had come to watch a video address given by Karine during the ceremony.

In a pre-ceremony interview, Christopher said, “My mother and my parents always instilled the importance of education into us and supported us. We are really excited to see where my sister is now because of that support.”

“I am proud of my children,” said Elianne, who is 71. “I always try to be there for them, and I am proud they’ve accomplished what they have done.”

The graduation ceremony opened with the Hempstead High orchestra playing “Pomp and Circumstance,” while 390 graduates processed to their seats. School officials greeted the students in English and Spanish from Hempstead Village’s mobile stage.

The day’s speeches by Karine Jean-Pierre, salutatorian Ashley C. Rivas Dubon, and valedictorian Daniella Valentina Marroquín Chavarría, were notable as much for their honesty as for their eloquence.

Jean-Pierre’s speech was projected by video on a large digital screen.

“I grew up right here in Hempstead just like you,” said Jean-Pierre. “I am the daughter of Haitian American immigrants. In addition to doing my math homework, I was helping my parents understand their bills and take care of my siblings. I know for many of you, school is just one of your responsibilities.”

Jean-Pierre, who is a Black, openly gay woman, recalled how she was inspired by seeing people who looked like her rise to prominence.  She encouraged the students not to think of their Hempstead background as a hindrance.

“Because of where you came from, not in spite of it,” said Jean-Pierre, “you are going to go on to do great things because you know how to keep going while things get tough.”

The fact that circumstances can be tough was articulated by both Rivas and Marroquín.

Rivas spoke candidly about teen depression and anxiety — feelings that can seem like self-indulgence to hard-working parents with aspirations for their children.

Rivas said, “The common simple solution was to do more school, study daily, and everything will be okay.” But for young students, at times, “It felt as though mental health needed to be traded in for excellent grades.”

Rivas described overcoming her own panic attacks, and informed her audience in both English and Spanish that, starting July 16, the federal government is making 988 a national number that connects a caller with trained counselors.

Despite her mental health struggles, Rivas concluded by gratefully acknowledging the strength and support of her family and friends.

Marroquín spoke of a difficulty that wealthier students might never encounter: lack of space in which to concentrate on her schoolwork.

At age 14, she had written in her diary two goals: to become valedictorian of her high school class, and to attend Columbia University.

Both goals have been realized, but only through extreme self-discipline. Marroquín’s family members spent long days at draining jobs, so afternoons and evenings in her crowded home were filled with TV and family noise.

“This in turn often made the only time I could fully focus on academic assignments a window of time between midnight and morning,” said Marroquín Chavarría. “As a matter of fact, I wrote this speech at 4 a.m. on my living room couch.”

The graduates who shouted and cheered for Marroquín’s words showed their own serious drive for education. Nearly 15 percent of them had earned Advanced Regents diplomas. Ten percent held the Seal of Biliteracy certificates.

One Seal of Biliteracy holder, Kaldwin Joshua Lerandy Ladislas, told the Herald that he is fluent in French. He became fully certified as an EMT through the partnership between My Brother’s Keeper and Queens College.

“I enjoy serving as an EMT in my community while being able to communicate with my fellow citizens who don’t speak English as a first language,” Lerandy Ladislas said. He especially helps members of Hempstead’s Haitian community.

Dr. Ashton Bell, who teaches English and special ed, stood on the field smiling as his students walked by with their diplomas.

“What we’re witnessing,” said Bell, “is the resilience of our young people being able to bounce back from a crushing global pandemic, not lose stride and graduate on their intended graduation date.”