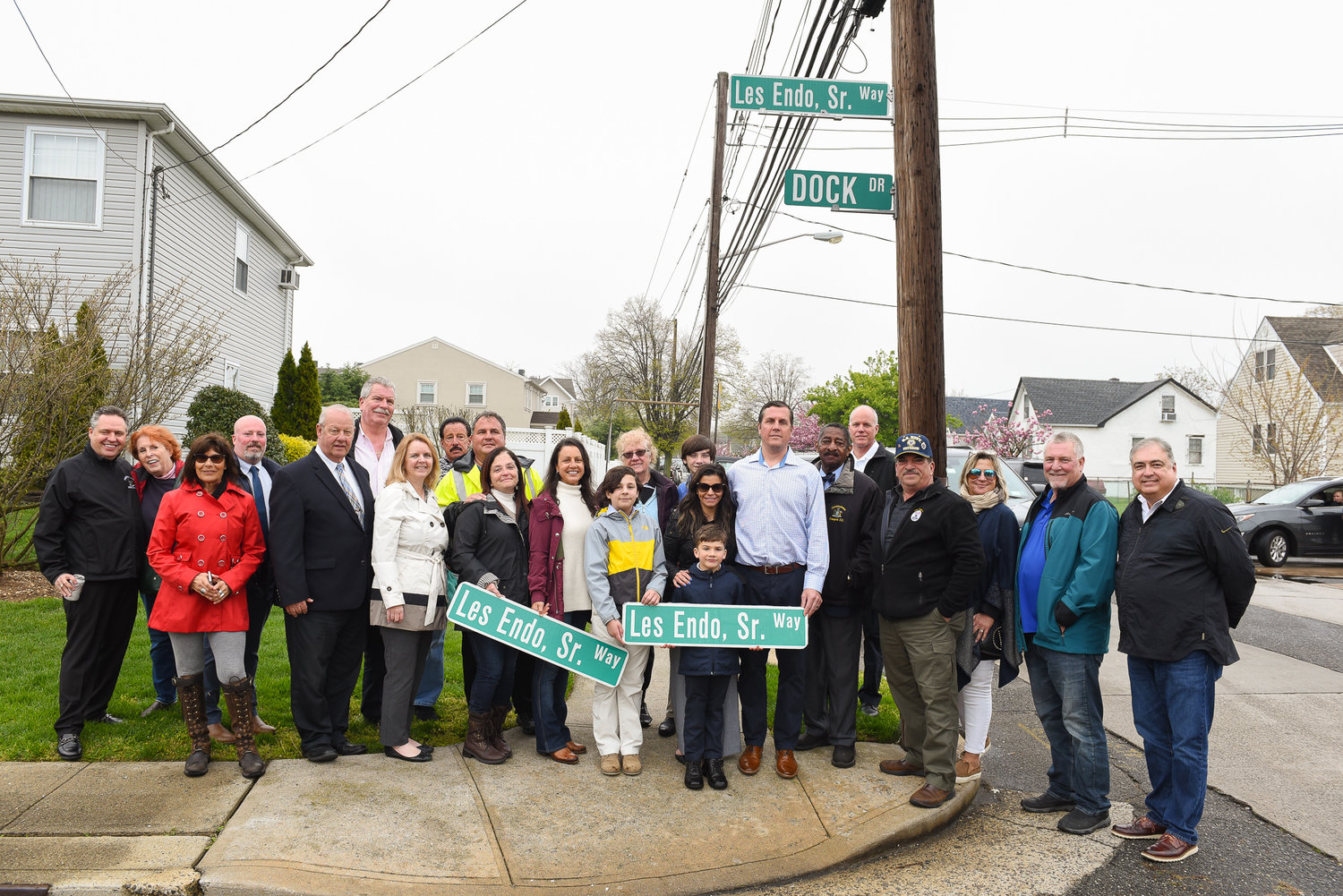 Friends, family, and village officials surrounded Marianne Endo (back row, wearing dark glasses) at the renaming of the Dock Drive for her late husband, Lester Endo.
Courtesy Village of Freeport 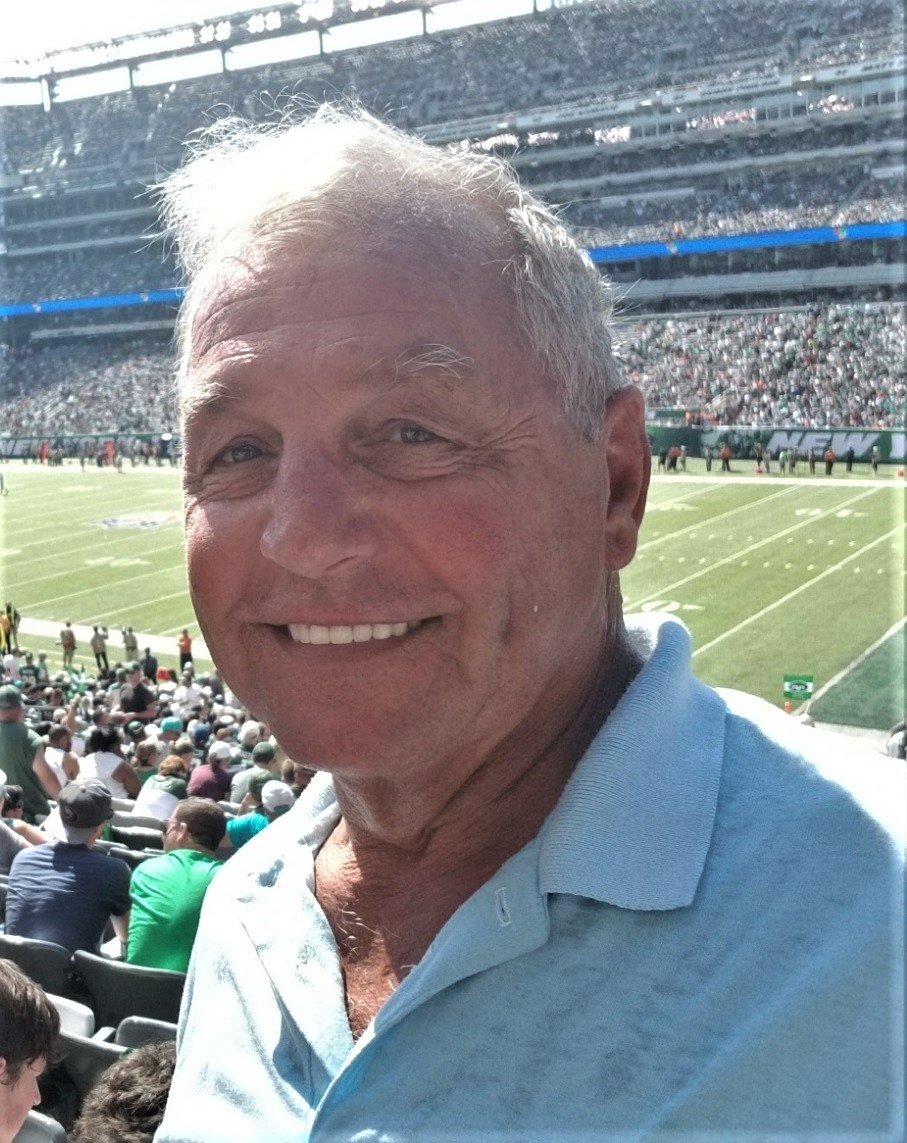 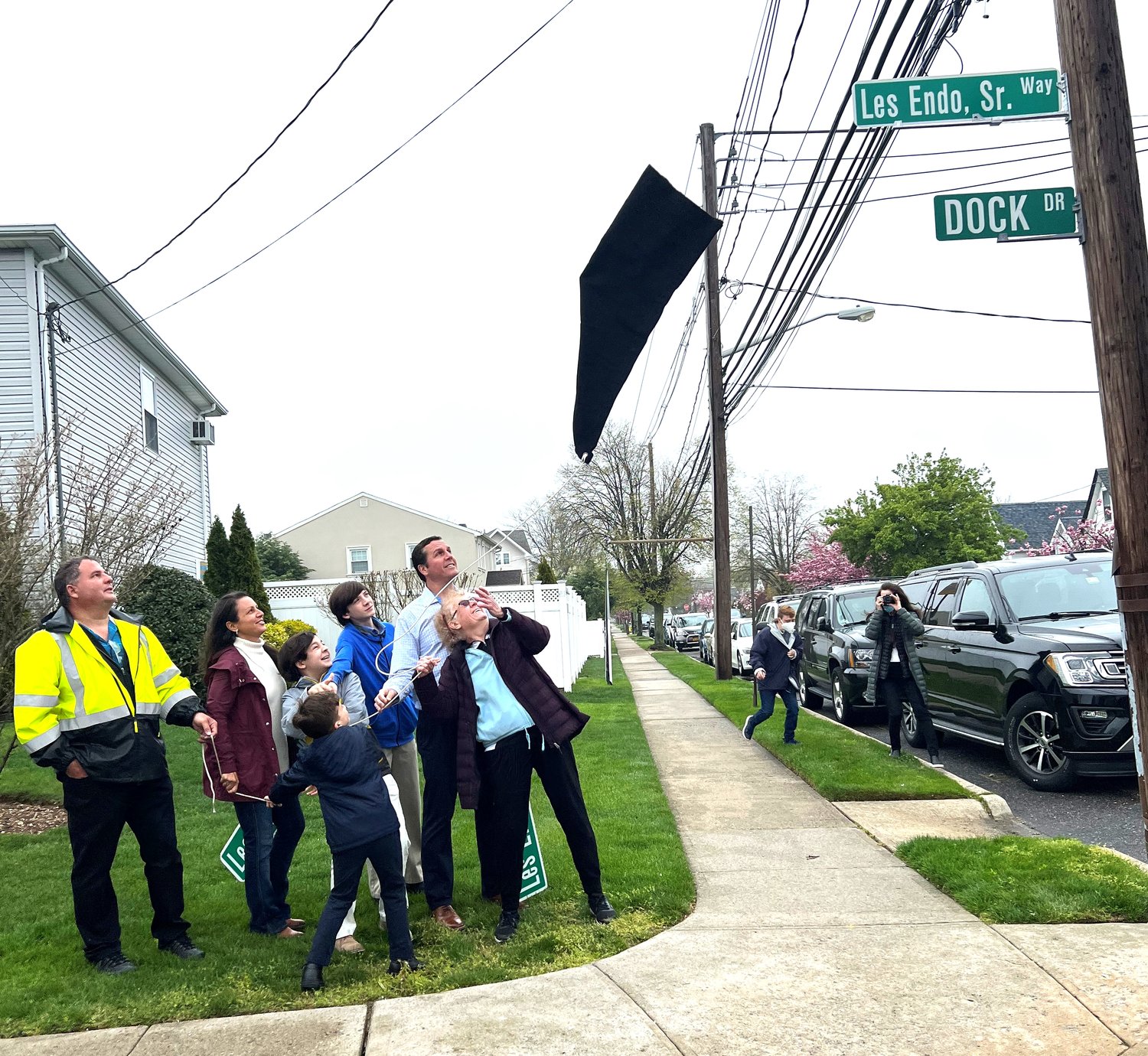 Marianne Endo, right, and her family pulled the veil from the new street sign commemorating her husband, Lester Endo. Surrounding her were Lester Endo Jr. at left, his wife Kimberly, grandsons Logan, William, and Andrew, and son Kenneth. At right, one of Les’s canoeing buddies, Casey Baierlein, approached while his mother Pat took a photo.
Reine Bethany/Herald
Previous Next
By Reine Bethany

Under a sky softened to gray by a morning thunderstorm, the Endo family and friends gathered around Kennedy at a portable podium.

“He was actively involved with the LIttle League in Freeport,” Kennedy said, “and he dedicated endless hours to special needs athletes. He was a participant and organizer of the Freeport Memorial Day Parade, as well as a steadfast supporter, with the Chamber of Commerce, helping with the installation of holiday lights throughout the Village of Freeport streets. He helped to organize the Freeport Chamber of Commerce canoe races every year, and coincidentally, I have here with me last year’s first place.”

Kennedy displayed the small first-place medal he had earned at the canoe races last August 1. The crowd laughed and applauded.

“On behalf of the trustees, staff, department heads, residents, businesses, Chamber and myself,” Kennedy continued, “I can only say that this street renaming is greatly deserved by a great person, Les Endo.”

Endo’s wife, Marianne, came to the podium and said, “Thank you all very much. I wish he was here. This is such a positive thing for me to go forward. We’re going to stay with it, we’re going to work. He’s always in our hearts.”

Kennedy conducted the group to the rope trailing onto the sidewalk, which was attached to the black cloth bag that veiled the sign.

“Can I ask you to pull the rope for us?” Kennedy asked Marianne. “You and your family come up here.”

The family members grasped the rope. Kennedy counted down, “Three—two—one!” The bag slid from the green-and-white sign, evoking prolonged cheers and clapping from the crowd.

The ceremony over, photojournalists snapped group photos while the many who had known and loved Les Endo clustered on the street and sidewalk, chatting and remembering their friend.