Street renamed for veteran who became a judge 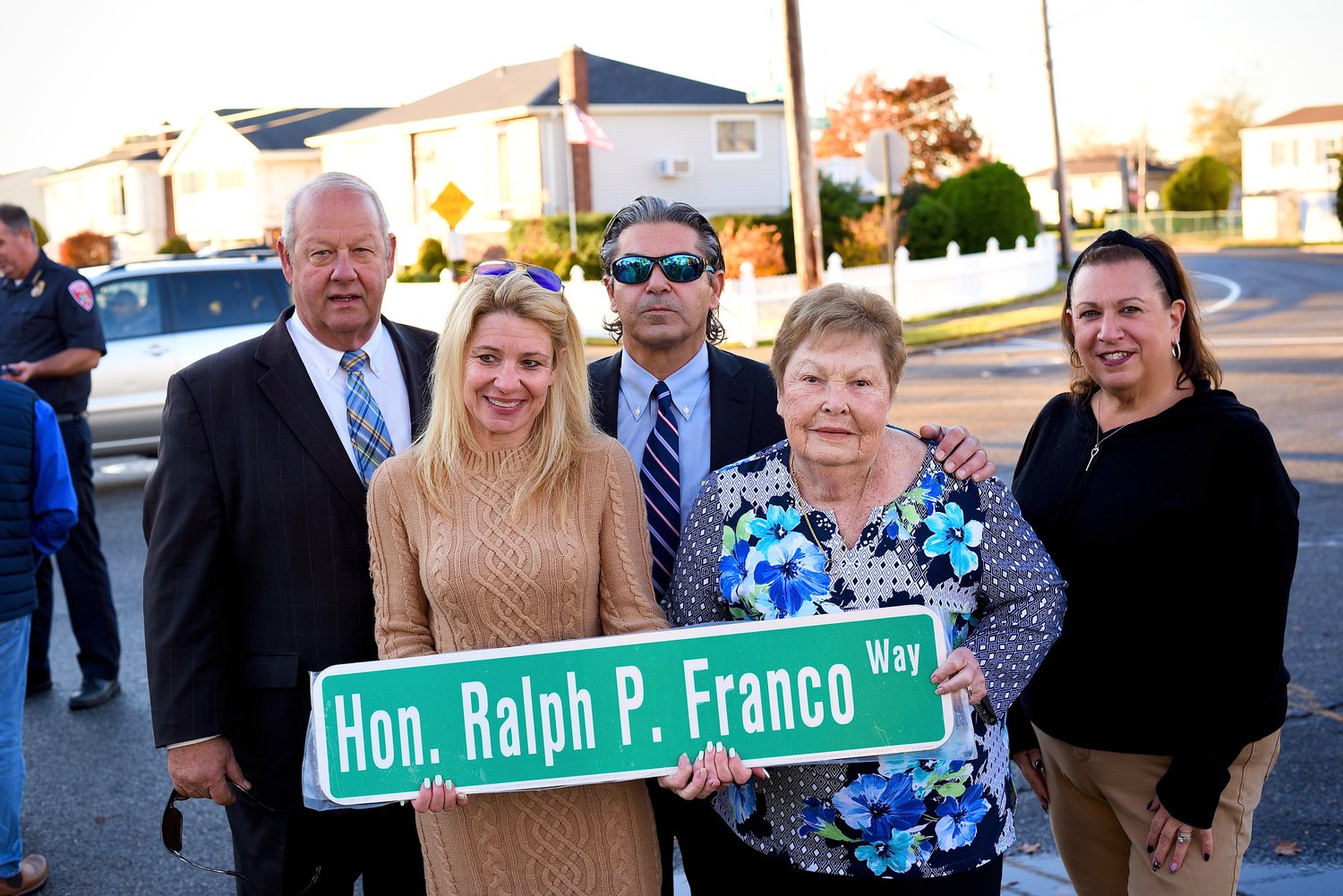 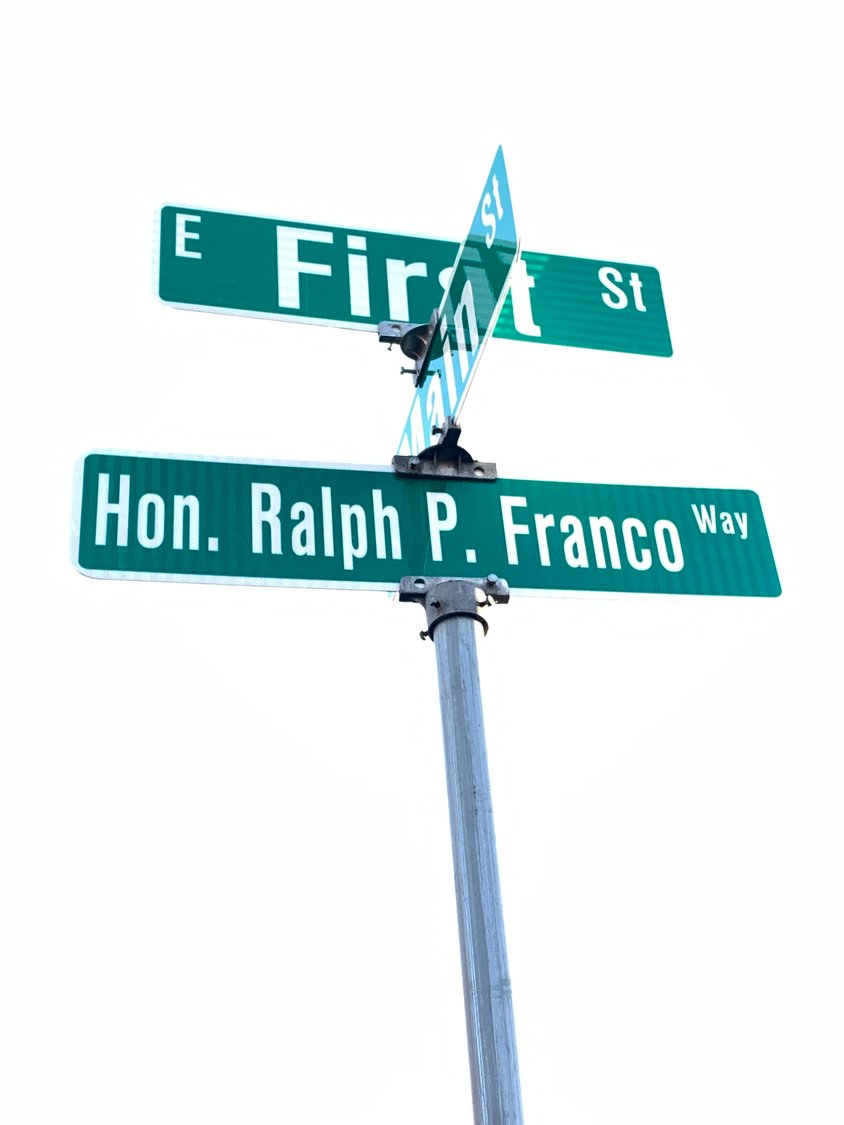 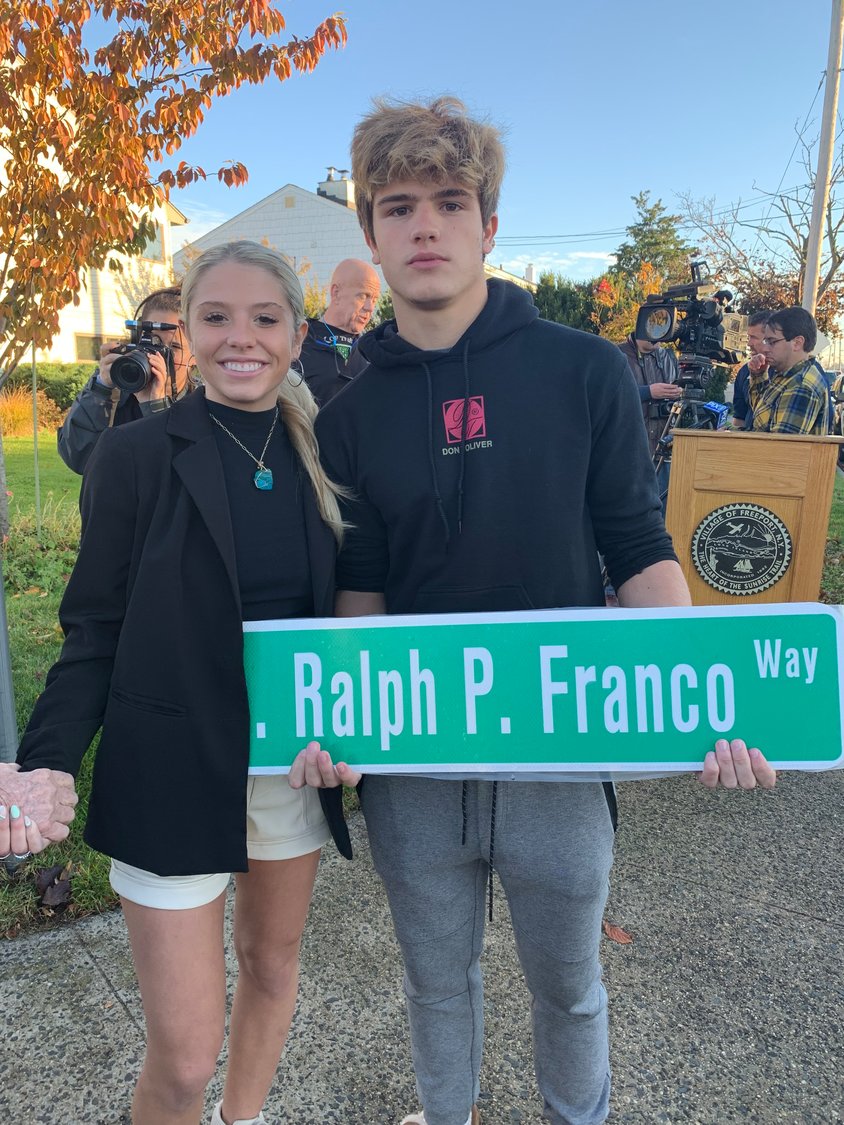 Two of Franco’s grandchildren, Faith and Richard Ippoliti, with a copy of the street sign named for their grandfather that will be kept in their family home.
Courtesy family of Hon. Ralph P. Franco
Previous Next
By Reine Bethany

On Nov. 12, under a blue sky, East First Street was renamed for the Honorable Ralph P. Franco, one of Freeport’s most civically active residents and a World War II veteran.

The renaming ceremony was attended by his widow, Lorraine, his son, Ralph P. Franco Jr., his daughter, Lauren Ippoliti, and their families. Joining them were village Trustees Chris Squeri, Jorge Martinez and Evette Sanchez, who was first clerk when Franco was a village justice in the late 1970s. Mayor Robert Kennedy officiated.

“I am proud to rename East First Street in honor of Judge Franco,” Kennedy said. “He was a past Freeport village justice who served on the bench in Freeport for more than a decade, on the Nassau County District Court for six years and, in addition, served as a village trustee and deputy mayor. Judge Franco was also a fellow veteran in the United States Navy. Freeport will miss the honesty and integrity of Judge Franco.”

“Ralph and I were married 61 years when he passed,” said 87-year-old Lorraine Franco, “and they were blessed, wonderful years. He was a wonderful man. I was so lucky to have him in my life. … I know he’s looking down at us and he’s saying, ‘Good job, Mayor. Thank you so much.’”

“He’d be so blessed and honored to know this was happening for him,” Lauren Ippoliti said. “He had so much pride in Freeport. His name belongs here as a legacy.”

The Francos bought their house on East First Street in 1964. They raised their children there while Ralph advanced from private law practice to his six-year stint as a Nassau County District Court judge. He was elevated to the county Supreme Court, where he served until he was 76. After that, he became a county judicial hearing officer.

“He applied and remained on [the judicial hearing] program until he was well into his 80s,” Lorraine said. Even when the judicial hearing position was eliminated from the county budget, her husband continued as a volunteer, she said, “because he loved what he did. He loved his job.”

Franco was a member of eight law associations as well as the American Legion, the Knights of Columbus and the Freeport Rotary Club. He was an honorary member of the village Fire Department.

Always active and outgoing, he joined the Navy right after graduating from high school. He served as a medical corpsman, and earned two years of college credit. The war ended before he saw active duty. Encouraged by a judge in the Navy Judge Advocate General’s corps, he finished his four-year degree at Brooklyn College when the war ended, and took advantage of the GI Bill to earn a law degree.

He met Lorraine [MAIDEN NAME?] after he had established his law practice. They might at first have seemed an unlikely pair. “I grew up in the Bushwick-Ridgewood sections of Brooklyn,” she recalled, “and he grew up in East New York. His office was close to the church I went to, and a lot of my friends who lived in that area knew him. He was seven years older than I was, so he wasn’t part of the group, and he was busy going to school and building up his practice.”

When he called Lorraine to see if she might go out with him, she wasn’t available, but when her parents ran into a legal problem with a new landlord who wanted to sell the building where they lived, Lorraine said, “Why don’t you call that young lawyer, Ralph Franco?”

That young lawyer solved her parents’ problem, but didn’t bill them. “My mom called him and said, ‘Mr. Franco, please send us a bill,’” Lorraine recounted. “And he said, ‘Please invite me over for some coffee and cake, and make sure your daughter is home.’ His partner said, ‘We can’t bill on coffee and cake,’ and Ralph said, ‘Well, you didn’t see their daughter.’ And that was it.”

Smiling, Lorraine said, “He always laughed — he always said I was his fee. But it was ordained that we would finally meet.”

It was the fall of 1955, and Franco happened to be moving his parents into a house he had bought for them in Freeport. Lorraine agreed to let him call her after the holidays. Their relationship flourished, and they married on Oct. 24, 1959.

“We enjoyed politics,” Lorraine said. “I always teased him and said I was his campaign manager, and I traveled to all the different political things with him. We enjoyed our lives together.”

When Ralph developed Parkinson’s, Lorraine said, “I had care here in the house, and so we were together right till the day he died.”

The funeral service for the Brooklyn-boy-turned-Freeporter was held at the Hungerford & Clark funeral home in the village. The pandemic precluded the crowd that would have gathered, but the street renaming brought Franco’s family, friends and colleagues full circle, from grieving his death to celebrating his achievements and his character.

“He had a very wonderful life,” Lorraine said, “and I was blessed to share it with him.”