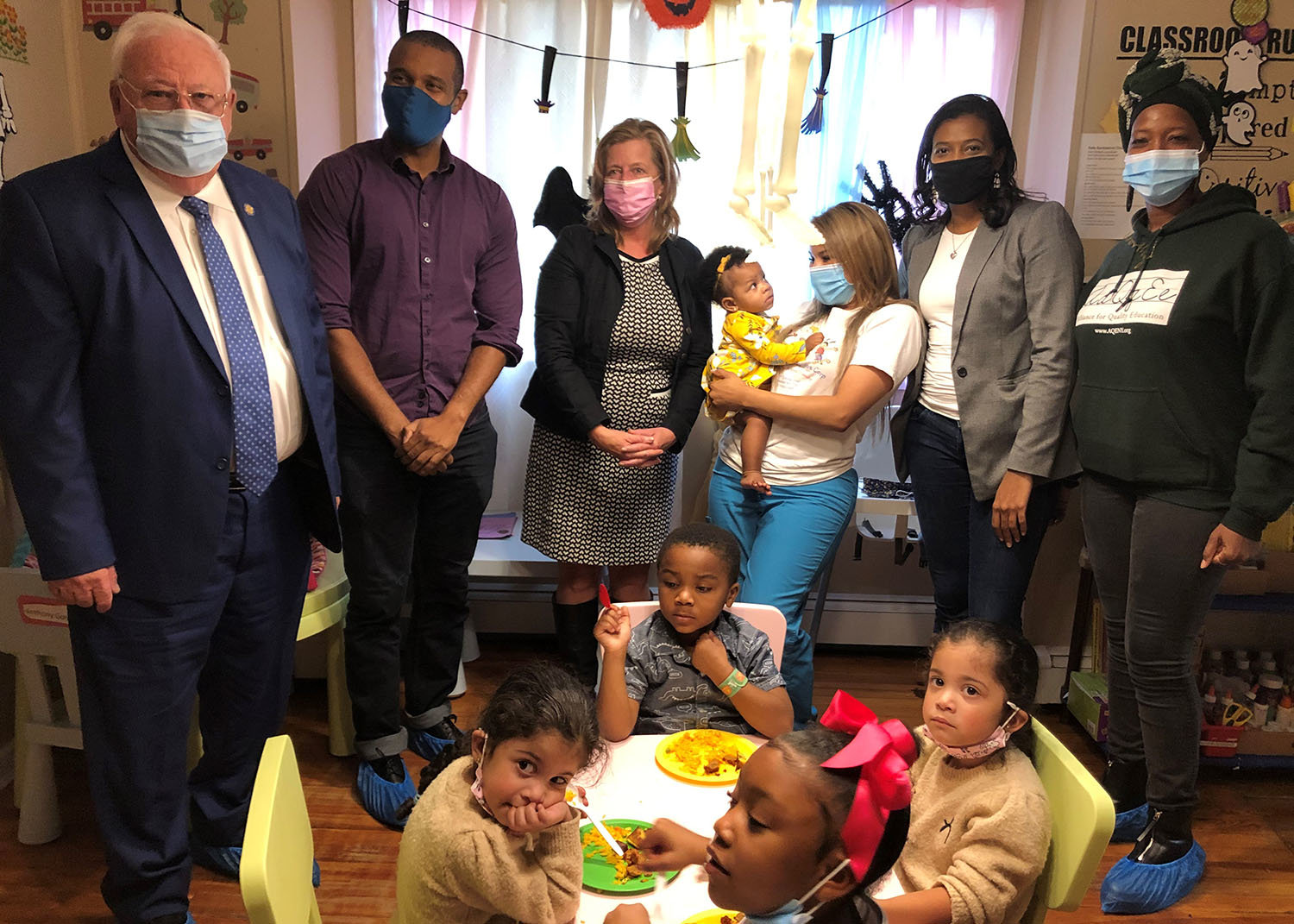 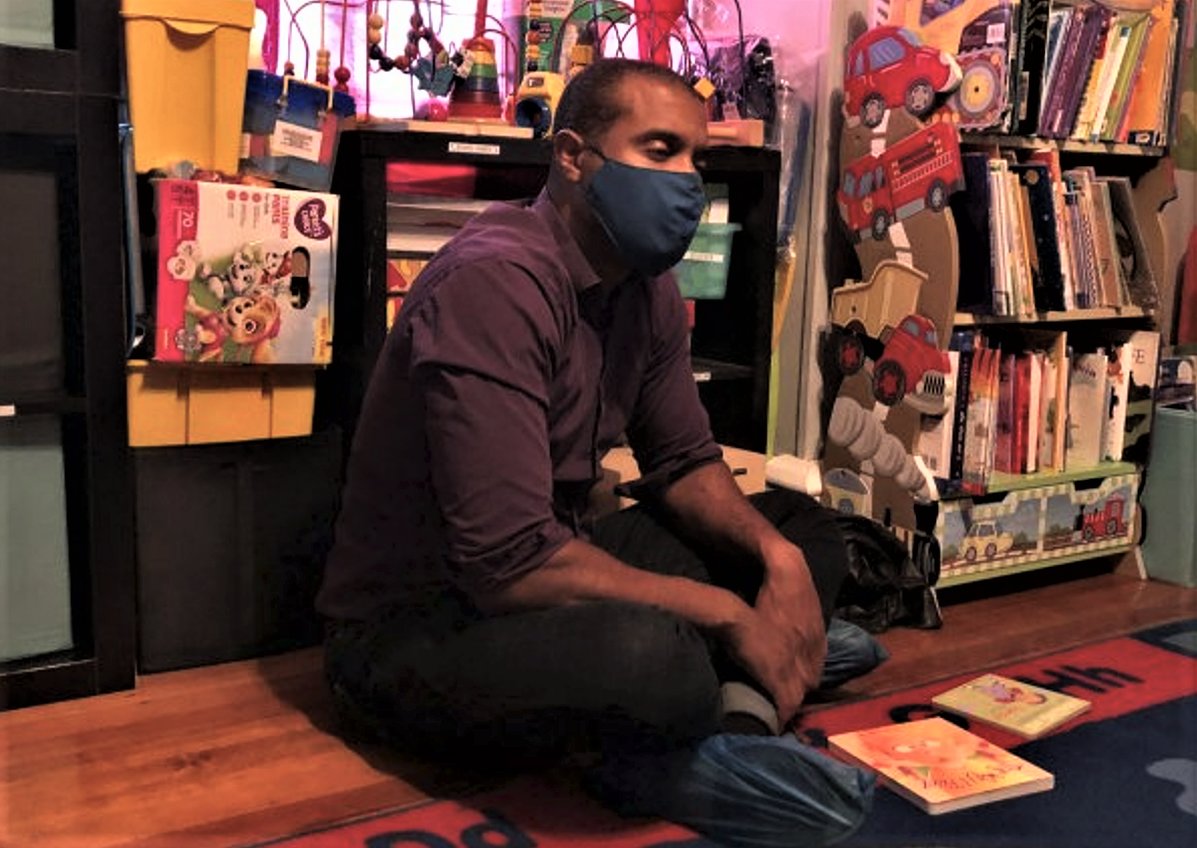 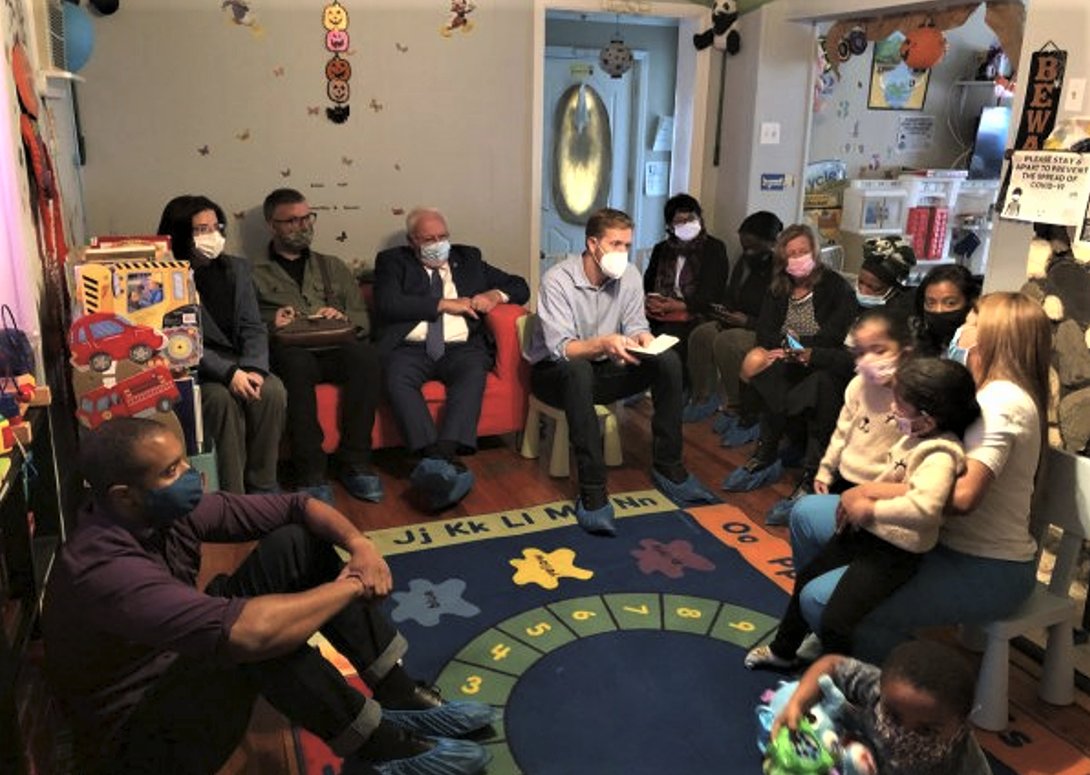 Where childcare is still available, it is largely due to a dramatically underpaid workforce.”
New York State Senator Jabari Brisport
By Reine Bethany

The Innovative Daycare Corp., at 67 Centre Street in Freeport, was chosen by state officials last month as one of two facilities to serve as visitation sites during a nine-week child care listening tour.

Freeport resident Janna Rodriguez, 32, has owned and operated the group family day care facility for three years, but has been a provider for seven years.

State Senators Jabari Brisport and John Brooks, Assemblyman Andrew Hevesi and Assemblywoman Judy Griffin spent over two hours with Rodriguez and her assistants, Ginelly Dejesus and Sandra Tineo. Rodriguez took the elected officials through her home-based facility and introduced them to the children who spend their days there.

Brisport chairs the Senate’s Committee on Children and Families. In the Assembly, the committee is chaired by Hevesi, who is partnering with Brisport on the tour, which will continue through Dec. 2, and cover 10 regions across the state.

According to Brisport’s website at nysenate.gov, the tour’s purpose is “to hear directly from childcare providers and parents in our communities.” In the view of the officials on the tour, child care has received insufficient state and local funding for decades. Escalating operating costs have forced many child care centers to close, restricting the options for parents whose work schedules require them to find day care.

“Where childcare is still available,” Brisport’s website states, “it is largely due to a dramatically underpaid workforce, overwhelmingly of women — especially women of color — who are paid wages that leave the majority in near poverty.”

Rodriguez herself advocates for better child care funding by keeping in touch with U.S. Rep. Kathleen Rice and the other elected officials who represent her area. Operating a day care business, she says, has strengthened her determination to see supportive legislation enacted in Albany. She is a passionate advocate of the Build Back Better Bill now before Congress.

“What the Build Back Better plan would create is a sustainable child care sector by increasing the median income percentile for subsidy and creating a universal child care system for birth to 5 years old,” Rodriguez said. “The federal recommendation is that if you make 75 percent of the median [state] income, you could get approved for subsidy” to help pay your child care costs. As things stand in New York however, she added, “a household cannot bring in more than 69 percent of the median income to qualify, which is not reflective of the high cost of living here in Nassau County.”

According to ChildcareNassau.org, effective June 1, 2021, a single parent with one child cannot make more than $34,480 per year to qualify for a subsidy. Each additional person in the household raises the income the household cannot exceed by $9,080, so a family of eight that brings in more than $89,320 does not qualify for a day care subsidy.

“The middle-class families are being affected the most,” Rodriguez said, “because if your household income is $100,000, which is not a lot of money on Long Island, you don’t qualify. So now you have to cover everything for child care out of pocket.”

The child care crisis is exacerbated by the loss of workers in the field. According to Salary.com, the average salary for a child care center worker in Nassau County is $38,553 — which would allow the worker to qualify for day care for up to two of his or her own children, but hardly constitutes sufficient income for all the expenses of a household.

Rodriguez gave her two staff members a raise of 25 cents per hour last year, even though, she said, “Economically, it just wasn’t a smart decision, but I know it was the right decision for me, because as a business owner, as a minority, as a woman, to be able to support someone else in their need, I took the risk. But there needs to be some kind of supplementary support that I can get. Right now [the Nassau County Department of Social Services] is still paying $10 an hour [in subsidies per child]. Minimum wage is $14 an hour!”

Day care centers are closing for lack of employees in need of higher wages. “They’re leaving our sector to take on jobs that are paying them more, that are offering them benefits that we can’t,” Rodriguez said, “and now who’s going to support our children? The school districts can’t support early childhood education — that work is done by child care providers.”

Rodriguez cares for eight children, infants to age 12, from 7:30 a.m. to 5:30 p.m., and eight more children who come after school. The bright, thoroughly organized facility has a separate room and bathroom for infants, a dayroom with shelves full of educational activities for toddlers through preschool children, a living room with a library of books, puzzles and games for those of all ages, a small computer for the older children, and a backyard with a garage in which outdoor toys are stored. Everything in the facility is sanitized at least twice weekly. The food handling, from kitchen to tables to dishwasher, is in accord with pandemic protocols, as are the two big washers and dryers in the below-ground area, where Rodriguez and her assistants handle six to 12 loads of laundry weekly.

Rodriguez’s rent for her home, and her businesses taxes, total nearly $65,000 per year, which doesn’t include the cost of food or utilities or employee wages. Though she received some relief with a Paycheck Protection Program loan (but did not qualify for the second round), her expenses doubled in 2020, yet she kept up with all her bills, as well as her nightly paperwork. In addition, she takes classes from 6:30 to 9:30 p.m. with the School of Professional Studies in Manhattan to earn her Child Development Associate credential. She has a bachelor’s degree in political science, focusing on law with a minor in medical anthropology, from York College.

The CDA credential will enable her to pursue her dream of opening a day care center with a small preschool program and a special-needs component.

“I’m looking at doing something big with 150-plus children capacity,” Rodriguez said, “so that’s what Senator Brooks and all of us are trying to work on, so I can create a community center. … The community needs me to do that. If universal child care is going to be available, then there’s going to be the need for a bigger center, because the parents that couldn’t afford child care would now be able to apply for it. And that really is a true blessing.”