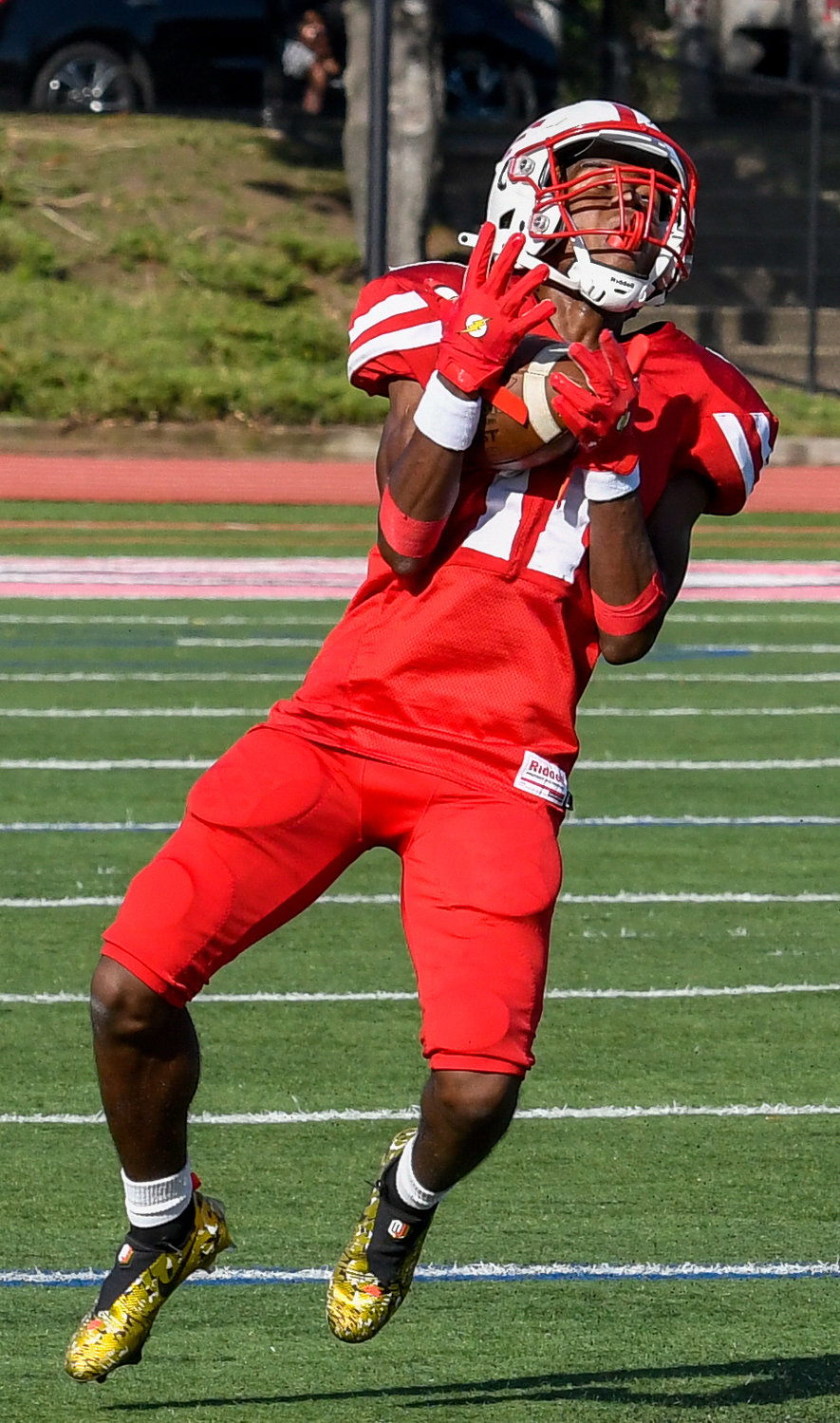 Junior Nazair Jean-Lubin had a pair of touchdowns, including a 59-yard kickoff return, in Freeport's 40-28 victory over Hempstead last Saturday.
Keith O'Reilly/Herald
By Andrew Coen

At the midway point of the season Freeport finds itself in contention for a return to the Nassau Conference I football playoffs after a rebuilding year in the spring.
A 40-28 win against Hempstead last Saturday improved the Red Devils to 3-1 with a tough schedule ahead in the season’s second half.  Longtime Freeport head coach Russ Cellan said with a young team and low roster numbers he is looking for progress throughout the fall that can lead to the team playing its best football when the games matter most.
“We’re just taking it a week at a time,” Cellan said. “We have the potential.”
The Hempstead victory featured a big day from sophomore quarterback D’Angelo Gordon, who rushed for 172 yards and two touchdowns including a 33-yard score with 4:18 remaining that produced the game’s final points. Freeport entered the fourth quarter trailing 28-26 before Martese Davenport gave the Red Devils the lead for good on a one-yard touchdown with 8:53 remaining.
Davenport also opened the scoring against Hempstead with a 32-yard touchdown run that tied the score at 8-8 following a Tahliel Simpston two-point conversion pass from Gordon. Nazair Jean-Lubin hauled in a 13-yard touchdown pass from Gordon in the second quarter for a 14-8 lead and later returned a kickoff 59-yards to the end zone that made it 26-14.


Last Saturday’s win followed a 38-27 setback at Syosset on Sept. 25 in which Gordon shined with 155 yards passing and two touchdowns. Despite the loss, Cellon said he came away from the game encouraged by how they responded to a tough team after falling behind 21-7 to make it a one-score game late in the fourth quarter.
“The kids clawed their way back into the game, which is a good sign,” Cellan said. “It was a real challenge and you never know how your team is going to react to something like that until you do it.”
The previous week, Freeport dominated in a 48-20 home win against Hicksville led by a strong running game that featured Donte Lloyd’s 88 yards rushing and two touchdowns and Martese Davenport with 87 yards on the ground to go along with two scores. Freeport was in command early jumping out to a 32-0 lead after the first quarter.
The Red Devils kicked off the season with a 27-6 win at Westbury in another dominating performance jumping out to a 21-0 lead after one quarter and 27-0 heading into the final period. Gordon rushed for 66 yards and tossed a six-yard touchdown pass to Matthew Drayton Thomas. Tahliel Simpson and Davenport both recorded rushing touchdowns in the victory.
Cellan credits the leadership of senior center/linebacker Kobe Valdez as a captain in bringing the team together on and off the field. He said Valdez has also improved his play quite a bit and is leader of the defense at middle linebacker.
Freeport begins a challenging second half of its schedule on Friday night at home against defending county champion Massapequa for a 6 p.m. kickoff.