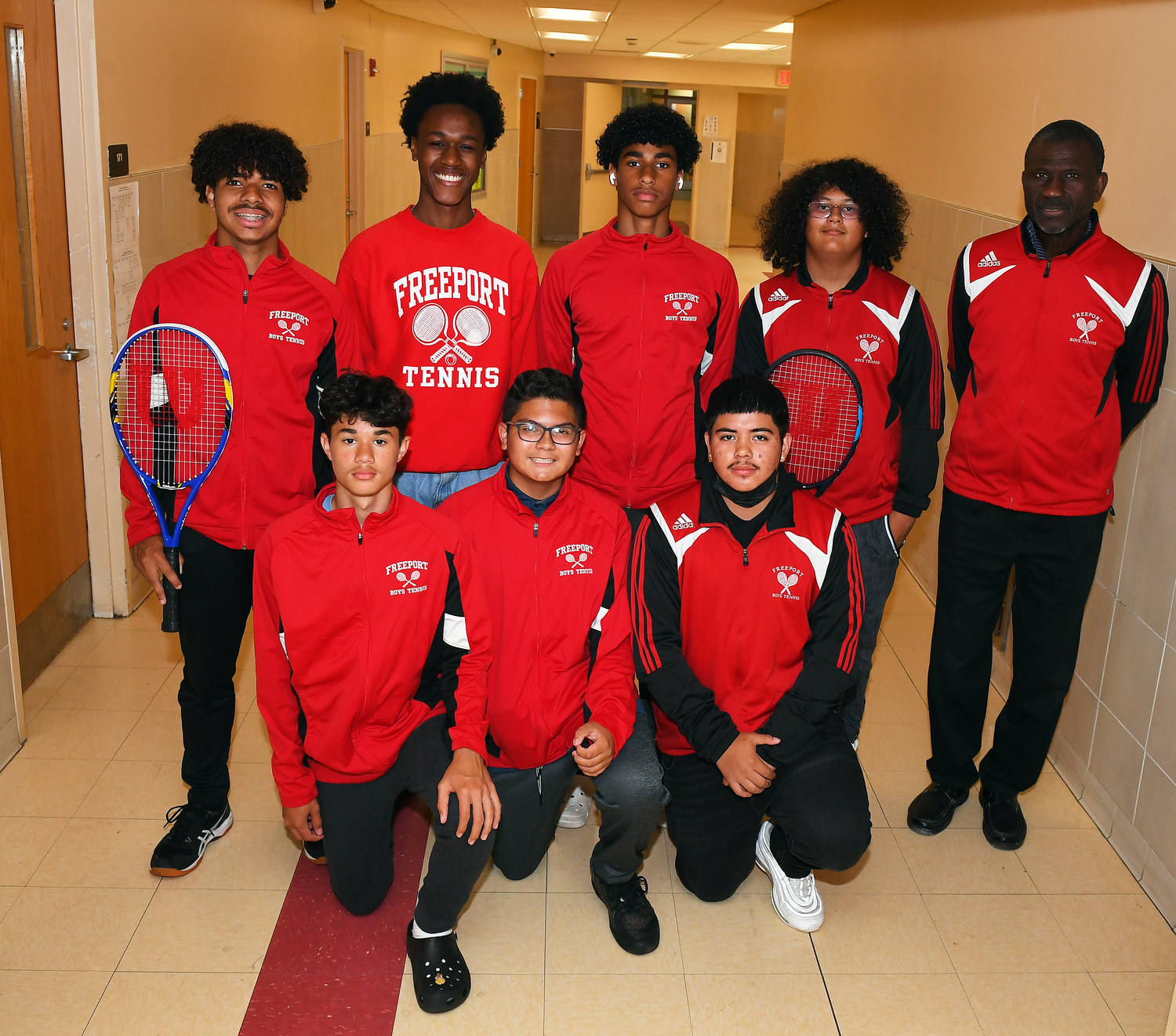 Strength in numbers and a clutch performance by its fourth doubles tandem led Freeport boys’ tennis to a share of the Conference IV title this spring.
The Red Devils won 12 of 14 matches to secure their best season under sixth-year coach Ousmane Diouf, who attributed much of the success to a roster he had to limit to 20.
“We were really struggling with enrollment for tennis until this year,” Diouf said. “It’s not the most popular sport in Freeport when you’ve got football and basketball and wrestling and lacrosse, but somehow things changed and I had to make cuts for the first time since I’m coaching the team.
“I really hope the level of interest continues,” he added. “I always try to recruit my students to play, but the roster grew much more than that. Anyone else who helped I urge them to do the same next year because we had so many kids show up for tryouts.”
Freeport’s top two singles player returned in the same position he held in 2021. Junior Jaden Easy finished his third varsity campaign with a dozen wins, overcoming what Diouf said were “slow starts” in a few. “Jaden has a good all-around game and he gets stronger as the match goes on,” he said. “He really improved his serve and still has to work on getting his forehand more consistent. But he loves tennis and is skillful.”


At second singles, newcomer Isaiah Lucas, a freshman who transferred from Queens, thrived and also won 12 matches. “He has all the skills,” Diouf said. “He can beat people with his serve, forehand and backhand. I knew watching him hit on the first day of practice he had talent and was going to be a big addition.”
Senior Myles Hollingsworth, a captain along with Easy, vaulted into the third singles spot after contributing at doubles since his freshman year. Hollingsworth made great strides in his game, Diouf said, and handled the pressure of singles well. “He lost a few very close matches but he’s a great leader who improved a lot from last season,” the coach noted.
Hollingsworth, Ismael Nunez and Kevin Larios were the only seniors on the roster, but Diouf said they will be greatly missed. Nunez featured an accurate two-handed backhand and meshed well with Christian John at third doubles. John, a tall lefty, brought a powerful serve.
Freshmen John Carlo Rivera and Ricardo Romero formed the top pairing and brought athleticism and some experience. “They practiced against each other playing singles and made for a nice team,” Diouf said.
Carlos Ventura and Erik Cruz both served well and made for a winning duo at third singles, while Jesse Menjivar and Dorian Trotman comprised the fourth doubles tandem.
In the May 12 season finale, Freeport and West Hempstead were tied 3-3 with the fourth doubles position still in action as the deciding court. Menjivar and Trotman knew what was at stake and came through.
“Everyone was watching,” Diouf said. “When our guys got the winning point, the kids went crazy.”
Report an inappropriate comment