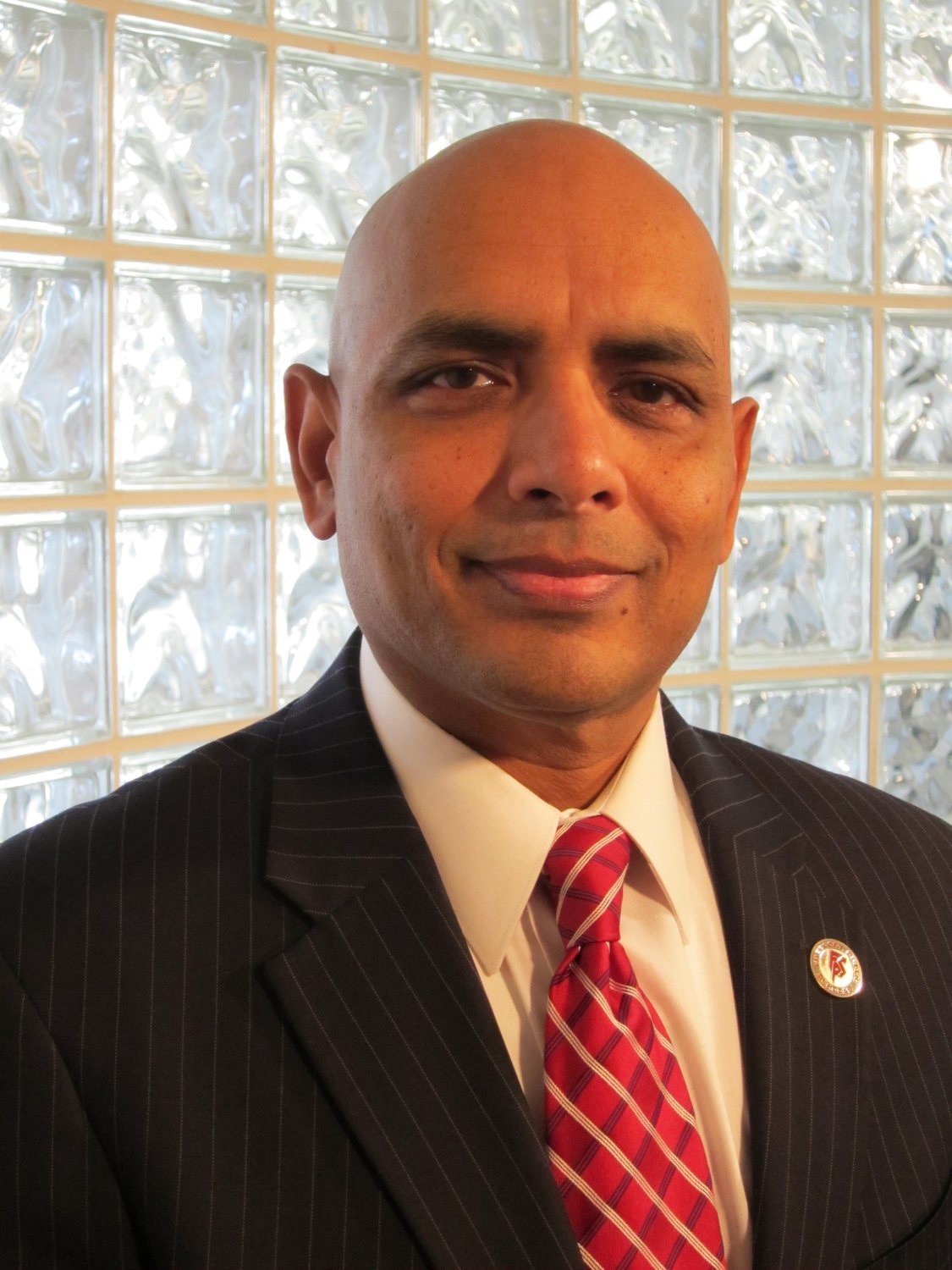 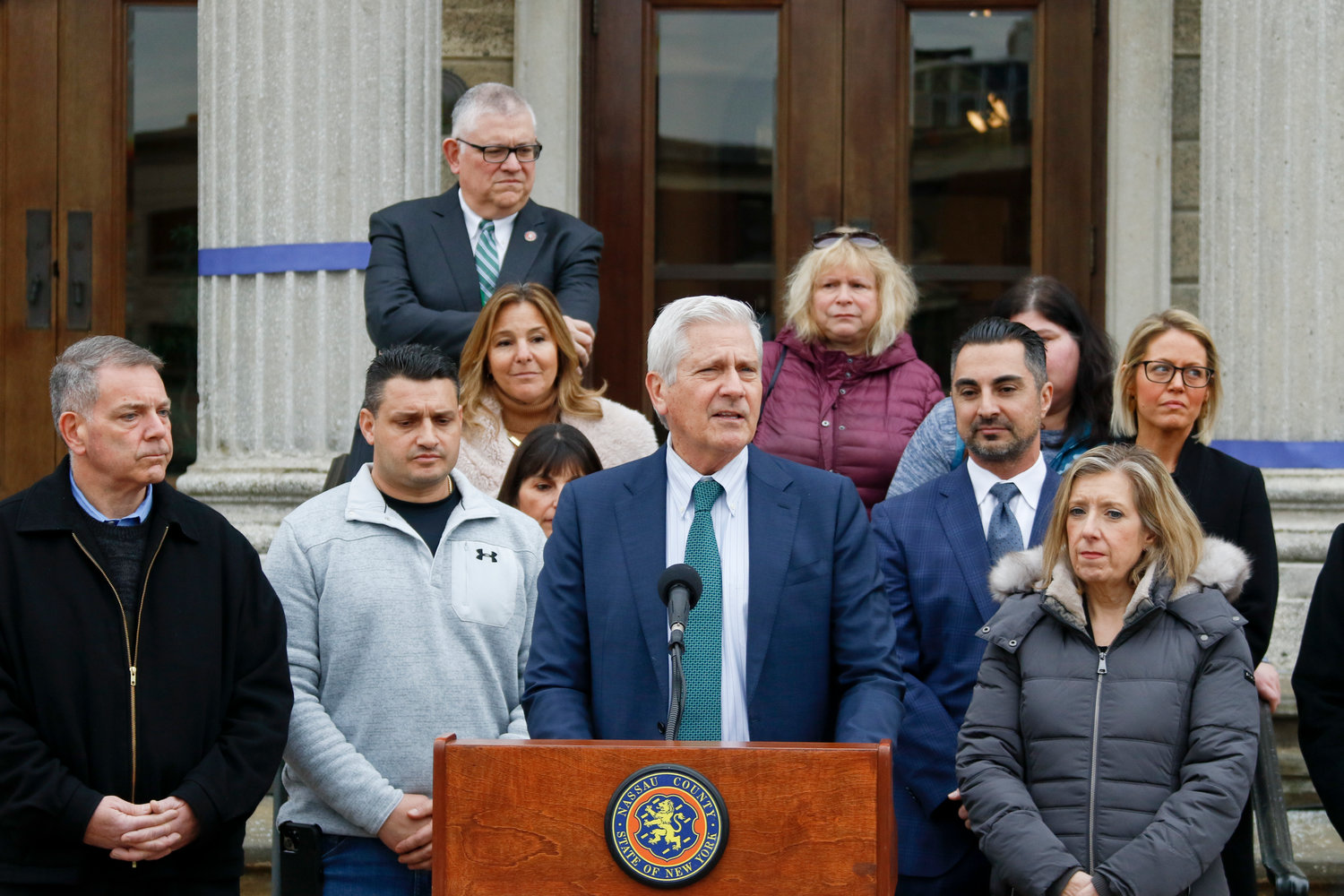 Nassau County Legislator Steve Rhoads, left, joined County Executive Bruce Blakeman as he announced support for a ruling against Gov. Kathy Hochul’s state mask mandate. To Blakeman’s left was Michael Demetriou, the lead plaintiff in the case against the mandate. They are surrounded by members of local school boards and a Wantagh parent expressing opposition to the mask mandate.
Christina Daly/Herald
Previous Next
The mask mandate explained

The regulation states that persons in New York state may be required to wear masks in public places, "as determined by the commissioner based on Covid-19 incidence and prevalence, as well as any other public health and/or clinical risk factors related to Covid-19 disease spread."

Hochul's Dec. 10 mandate was issued based on a directive by then acting Health Department Commissioner Dr. Mary Bassett, who was appointed to the post Dec. 1 and confirmed by the State Senate as health commissioner on Jan. 20

Freeport Schools Superintendent Dr. Kishore Kuncham announced Monday on the district website that students and staff would continue to wear masks in schools according to the New York state mask mandate.

The mandate was issued last Dec. 10 by Gov. Kathy Hochul based on a directive from the State Department of Health.

Kuncham's announcement was posted in response to Monday's ruling by State Supreme Court Judge Thomas Rademaker that, according to the state constitution, the mandate was not legally enforceable.

County Executive Bruce Blakeman held a news conference Tuesday on the steps of the Theodore Roosevelt Executive and Legislative Building in Mineola to call on Hochul to accept Rademaker’s ruling. The state immediately filed an appeal, and a state appeals court issued a stay on Rademaker’s ruling, meaning that, for now, the mask mandate will remain in place until the case can be fully reviewed by the appeals court.

County Legislator Steve Rhoads, a Republican from Bellmore who represents part of Freeport, was among those joining Blakeman on Tuesday. “This has nothing to do, in my opinion, with whether or not you believe masks should be worn,” Rhoads said. “It has to do with whether you believe that that decision should be made locally with input from parents to decide what happens to their own kids. And that’s the important principle that I think that the court stood for and that I hope the appellate division will uphold.”

Because New York was not legally in a state of emergency at the time, Rademaker wrote, then acting state health commissioner, Dr. Mary Bassett, could not direct that masks be worn in schools, and Hochul could not issue a mandate based on that directive without approval by the State Legislature. The State Senate confirmed Bassett as health commissioner on Jan. 20.

On Tuesday, Blakeman said, “We’re here today to request that the governor stand down, that she not further appeal the decision of Justice Rademaker.”

Blakeman expressed confidence that the appellate court would uphold the ruling because “the decision that Justice Rademaker made is principled, it’s well founded, it’s on solid ground.”

Blakeman said the lawsuit was about choice, not about masks. “If a parent chooses to send their child to school with a mask, that’s fine,” he said. “We’re not anti-mask. We’re anti-mandate.”

Michael Demetriou, a Bellmore parent and the lead plaintiff in the lawsuit to overturn the mask mandate, said Blakeman “gave us his word that he was going to stand with us shoulder to shoulder as a united people. We didn’t elect somebody as a party; we elected somebody that said we want to prioritize our choice as parents and our choice for children. This is about the children, always.”

Demetriou said his two young children, who attend school in Bellmore, had “both suffered directly as individuals” because of the mask mandate. His daughter has sensory issues exacerbated by the masks, and his son had manifested anxiety and tics.

“I believe in protecting your child’s innocence, always,” Demetriou said.

Massapequa School Board President Kerri Wachter also spoke, saying, “Our peer nations, they’re not masking their kids. Most of our country, they’re not masking kids. This is really only in New York. … It’s time to move past this, and I urge the governor to just let it go.”

Blakeman reviewed a timeline of the Centers for Disease Control and Prevention’s changing recommendations on mask wearing from the start of the pandemic in March 2020. “I think the science has been somewhat dubious,” Blakeman said. “I’ve asked for, from the governor, from the health commissioner, I’d like to see the data, I’d like to see the science. It hasn’t been forthcoming.”

He added that individuals who wish to wear masks would be protected from the coronavirus even if others do not wear them.

“The fact of the matter is, I would never, ever, ever endorse any policy that would put our children in jeopardy,” Blakeman said.