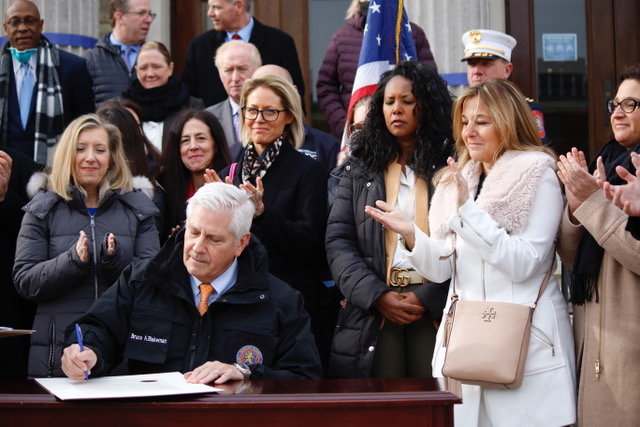 At a news conference on Jan. 6, Nassau County Executive Bruce Blakeman signed an executive order requiring school districts to vote in January on whether to require masks in classrooms.
Christina Daly/Herald

We believe wearing masks is one of the powerful weapons to stop the spread of Covid, along with vaccination.”
Dr. Kishore Kuncham, Superintendent, Freeport Schools
by Cristina Arroyo-Rodriguez, Scott Brinton, Reine Bethany and Jeff Bessen

Nassau County Executive Bruce Blakeman signed executive orders on Jan. 6 directing local boards of education to vote in January on whether their districts should mandate mask use, while also lifting the mask mandate for all county agencies and the state's temporary mask mandate in public places.

A Herald Facebook post seeking reaction from Freeport residents elicited five comments endorsing continued mask use in schools, three opposing it and several comments pointing out that, in New York state, a county executive has no legal jurisdiction over school boards and cannot mandate that they vote on mask use in schools.

“I’m in favor of mandated masks,” John Schreiber wrote in an email. “I’m for communal health and safety and would rather err on the side of safety.”

“Child hospitalizations for Covid are at record highs,” Jesse Pohlman said. “I know conservatives think poorly of schools, but should going [to school] really warrant the death penalty? No? Then, masks on, please.”

“The county exec cannot tell the school boards what to do,” Frank N. Tucker said. “Only the State Education Department can. He needs to keep his nose out of where it does not belong.”

It read, in part, “At this point in the pandemic, when pediatric hospitalizations are spiking at dangerous levels, it would be the height of irresponsibility to ignore Governor Hochul's vital efforts to protect public health. … For the sake of our children, teachers and school personnel, County Executive Blakeman must immediately rescind his irresponsible and clearly unlawful executive order." ​​​

Freeport schools had kept infection rates low, from reopening last spring through the winter break that began Dec. 24, district officials said. A Covid-related staffing shortage arose at the end of the winter break, so the school system went to remote learning from Jan. 3 to 9, but returned to in-person instruction Jan. 10.

“As we return to in-person instruction,” said in a Jan. 6 message posted by Freeport Superintendent of Schools Dr. Kishore Kuncham on the district website, “please know it is possible that we may have to be prepared to shift intermittently to remote instruction in the future on a school building basis or as a district. …. It is always our intention to have our students engaged in in-person learning in our schools.”

Blakeman’s orders read in part, ". . . given the historical data on Covid-19 and the ongoing debate over whether masks are more harmful than beneficial to children and to school environments in general, we should protect the freedoms and statutory rights of students and parents by resting with the parents the decision whether their children should wear masks in school."

School boards must vote "to determine whether or not parents and children should be granted the constitutional right to reject mask mandates while in the classroom."

On Jan. 6, Kuncham said in a statement, "As far as Freeport is concerned, masks will continue regardless of any of the local options being given. We believe wearing masks is one of the powerful weapons to stop the spread of Covid, along with vaccination, and certainly I believe, and our Board of Education believes, this is something that has kept all of us safe in our schools. Along with other measures, we’re going to continue that."

"Counties do not have the legal authority," the commissioner continued, "to require boards of education to vote on specific issues. School officers take an oath to obey all legal requirements. The State Education Department expects school boards will follow all legal requirements, including the face-covering regulation."

William Biamonte, chief of staff to the County Legislature's Democratic minority, said, "County Executive Blakeman can say that 'Nassau is normal again' all he wants, but as Omicron continues to spread like wildfire and hospitalize more children than any other Covid variant to date, this is a recipe for disaster."

Blakeman's orders come at a time when Long Island's Covid positivity rate — the highest in the state — was spiking at more than 25 percent, and a growing number of school districts are reporting increased transmission of the disease, with some, such as Freeport and Long Beach, being forced to close certain schools because of staffing shortages. Hospitalization rates are rising, as well.