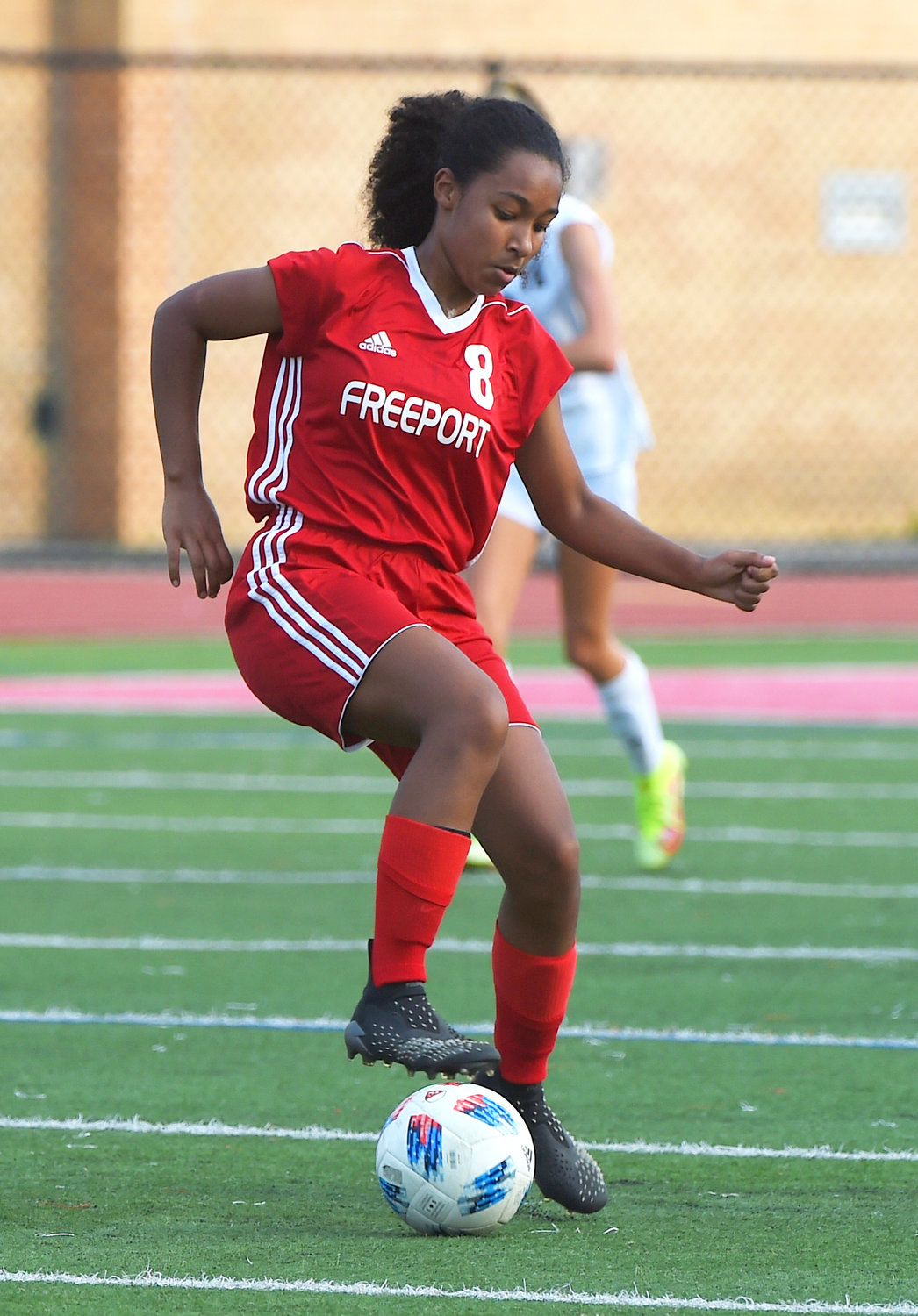 Senior Ancksu Dixon exploded for five goals in the opener to lead the Red Devils to victory.
Donovan Berthoud/Herald
By Brian Kacharaba

Can Ancksu Dixon be saving her best season for last?
The star senior matched a career high with five goals to lead Freeport to a 5-0 win at Conference AA2 foe Westbury in the girls’ soccer opener last Friday. Dixon scored twice in the first half and three times in the second.
Dixon, who also scored five times against Hempstead on Sept. 23, 2019, is already halfway towards her entire goal total from the abbreviated spring season, when she potted 10 in nine games. The captain’s final goal of the day, which she chipped over the goalkeeper, was the 50th of her high school career.
Most of the first four goals came after winning possession battles with the Green Dragon players and overcoming defensive pressure by shooting from outside the 18-yard line.
“She just knows what she’s doing,” Freeport coach Helen Saballos said the day before Dixon’s explosion. “She’s very unselfish, that’s what I love about her. She’s a team player and she leads. She’s like, ‘You know what, I’m going to carry my team with me and we’re going to do the best. I’m going to do what I can to help us get there.’”


The win also moved the Red Devils to within one of their entire total from last season (2-6-1), which ended with three straight losses by a combined score of 17-5. Saballos was straightforward in trying to get her players to communicate more on the field and use last season as a tool to further enhance their skills.
“We were very straight with them,” Saballos said. “We’re like, ‘Listen, we want you girls to have fun, but we also want to change the program a little. If you want to get better as a team and as an individual, you’re going to want to show up to practices and you want to give it your all. I can give them the materials, but it’s up to them to do what they want with the materials.”
Sophomore Alisson Caceres had an assist in the opener and is the only other returning player to score a goal in the spring. Saballos hopes to get secondary scoring from her as well as speedy junior Daniela Canales and sophomore midfielder Cassie Smith.
Saballos has high expectations for Amber Marquez after the junior continued to shine on defense after her callup from the junior varsity squad last season. She will be joined in the back with Arianna Martinez, whose junior season was marred by injury. Martinez can also play midfield with Vanessa Mendoza and the two have shown a strong rapport on the field with their playmaking abilities.
“They know each other like the back of their hands,” Saballos said. “When I combine them, they play very well.”
Junior goalkeeper Cintia Rodriguez-Berganza had two saves in the win after collecting 48 last season, including double-digit efforts in three of the games.
“She’s very confident and I think she’s going to do very well this season,” Saballos said.