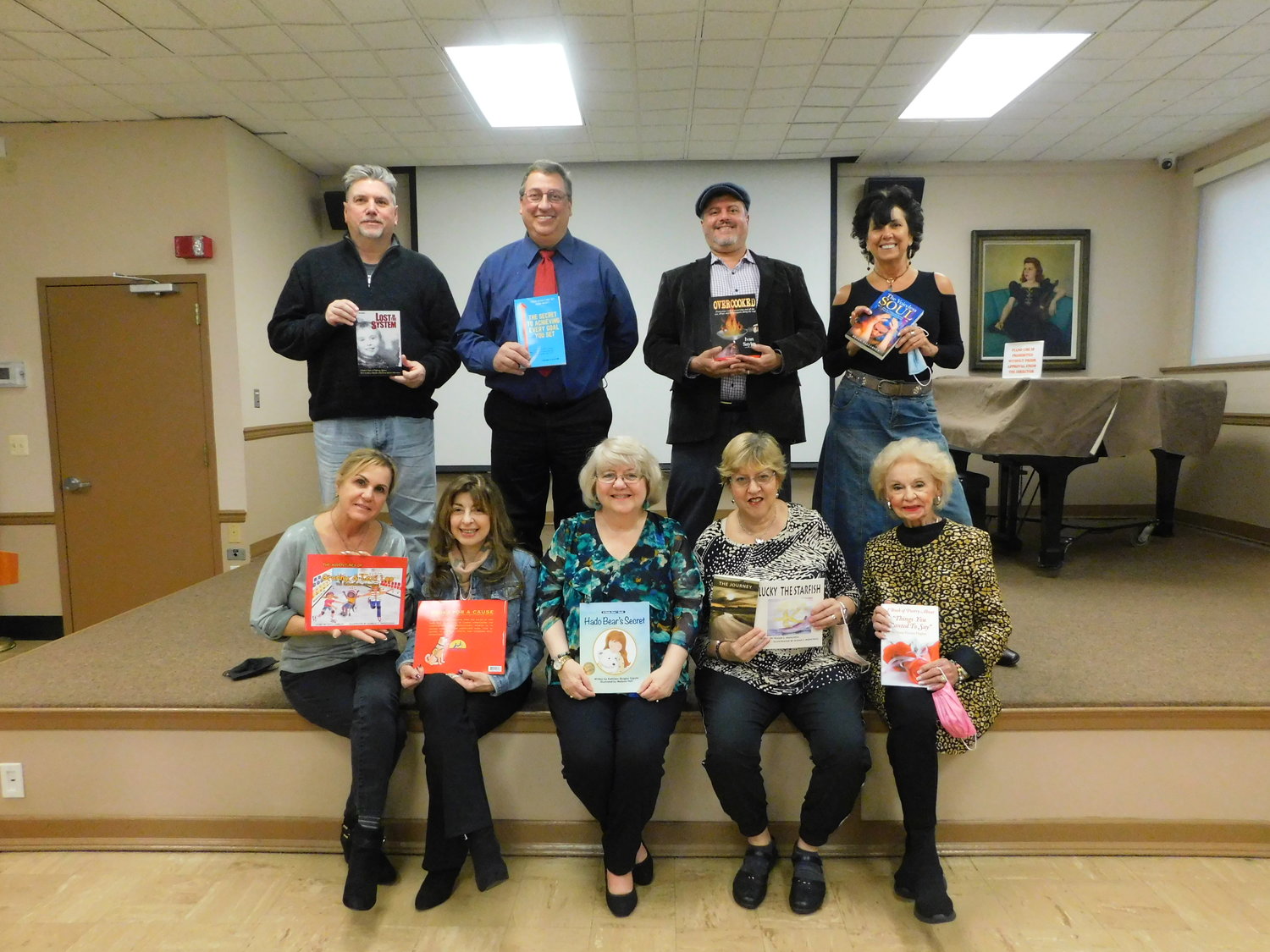 Until you’ve not only written a book, but found a way to get it published, you won’t appreciate the achievements of the members of the Long Island Author Coalition who gathered at the Freeport Memorial Library for a joint signing event on Nov. 7.

Ivan Sayles, Overcooked! From prep cook to ownership and all the sex, drugs, and shenanigans along the way

Sayles, 55, lives in Seaford, but is strongly connected to Freeport because he was the proprietor of Rachel’s Waterside Grill at 281 Woodcleft Avenue in Freeport for 26 years. He sold Rachel’s a few weeks ago to focus on his book and his family life. Overcooked! tells the story of his triumph over decades of addiction to cocaine. “I didn’t think of myself as an addict,” Sayles said, “because I was a functioning addict. But after I got clean, I realized I had been operating at 50 percent capacity my whole life.” The book came out through Peter White Publishing and has received 26 five-star reviews on Amazon.

Maria Victoria Hughes, A Book of Poetry about Things You Wanted to Say

Hughes has lived in Levittown 40 years. She is a life coach and a motivational speaker. She wrote for the Levittown Tribune and her award-winning poems have appeared in various publications. Her first published book, Things You Wanted to Say, came out on Amazon in 2014 and is a collection of her poems. “It’s really a book about your life,” said Hughes. She receives emails at HughesMV@aol.com.

Damelio, a 35-year Wantagh resident, taught in Long Island schools for more than 30 years. The Adventures of Granny & Lexi Loo centers on nine-year-old Lexi Loo, whose adventures with her grandmother teach about friendship and diversity, acceptance and love. All proceeds from this first offering in the Lexi Loo series go to Canine Companions, which provides service dogs to people with disabilities, and also facility dogs for healthcare, criminal justice and educational settings. The book is published through Barnes & Noble. Visit https://adventuresofgrannyandlexiloo.com.

Caputo, 71, lives in New Hyde Park. Hado Bear, her book’s protagonist, teaches children that we are all perfect as we are, though different. Caputo was inspired by the experiments of Dr. Masaru Emoto, whose 2004 book, The Hidden Messages in Water, was a New York Times bestseller. Hado Bear’s Secret is available through Amazon. Caputo has a nonprofit organization to help hospitalized children.

Stephen G. Flecker, The Secret to Achieving Every Goal You Set

Flecker, 55, is a Coram resident. He is a life coach and a business coach, with clients all over the world. The Secret to Achieving Every Goal You Set is based on Flecker’s personal experience of achieving goals and helping others to the same. “Most people think they know how to set goals,” Flecker said, “but know nothing on how to achieve goals or exceed them.” The book is self-published on Amazon as both a hard-copy volume and an e-book.

Susan Joy Menchell, The Journey and Lucky the Starfish

A Bellerose resident, Menchell, 60, was a wound care nurse for 37 years. She has been writing poetry since age 16 about “people, circumstances, lovers, places I’ve been.” The Journey was also published as Visions, and Lucky the Starfish was inspired by Menchell’s own mentally challenged brother. Both books are available through both Amazon Kindle and Barned and Noble. Lucky is also an e-book.

Levittown resident Kelly Tallakson, 62, published The Voiceless Soul in February of 2021. Tallaksen has been a board-certified hypnotist for 10 years, doing deep trauma work, helping her clients with “pulling out of the conscious mind to the shadow of the soul where the trauma is.” The book is about understanding the connection between soul and ego, and creating a bridge between psyche and spirit. It is self-published through Balboa Press, and is available at Amazon, Barnes & Noble, Walmart, and Target, in both soft and hard cover and on Kindle.

Tom Gibson, Lost in the System

Gibson, 58, lives in Glen Cove. His son Max became deaf in early childhood. Self-published early in 2012, Lost in the System details Gibson’s six-year struggle to find adequate services to educate Max, who is now 22 and attends Hofstra University, majoring in marketing and sports therapy. Gibson said that 90 percent of parents don’t advocate vigorously for their children, so he wrote his book to say that advocacy ultimately works and parents will be successful. The book is dedicated to his 26-year-old daughter, Ryan.