Pushing back against TPS termination 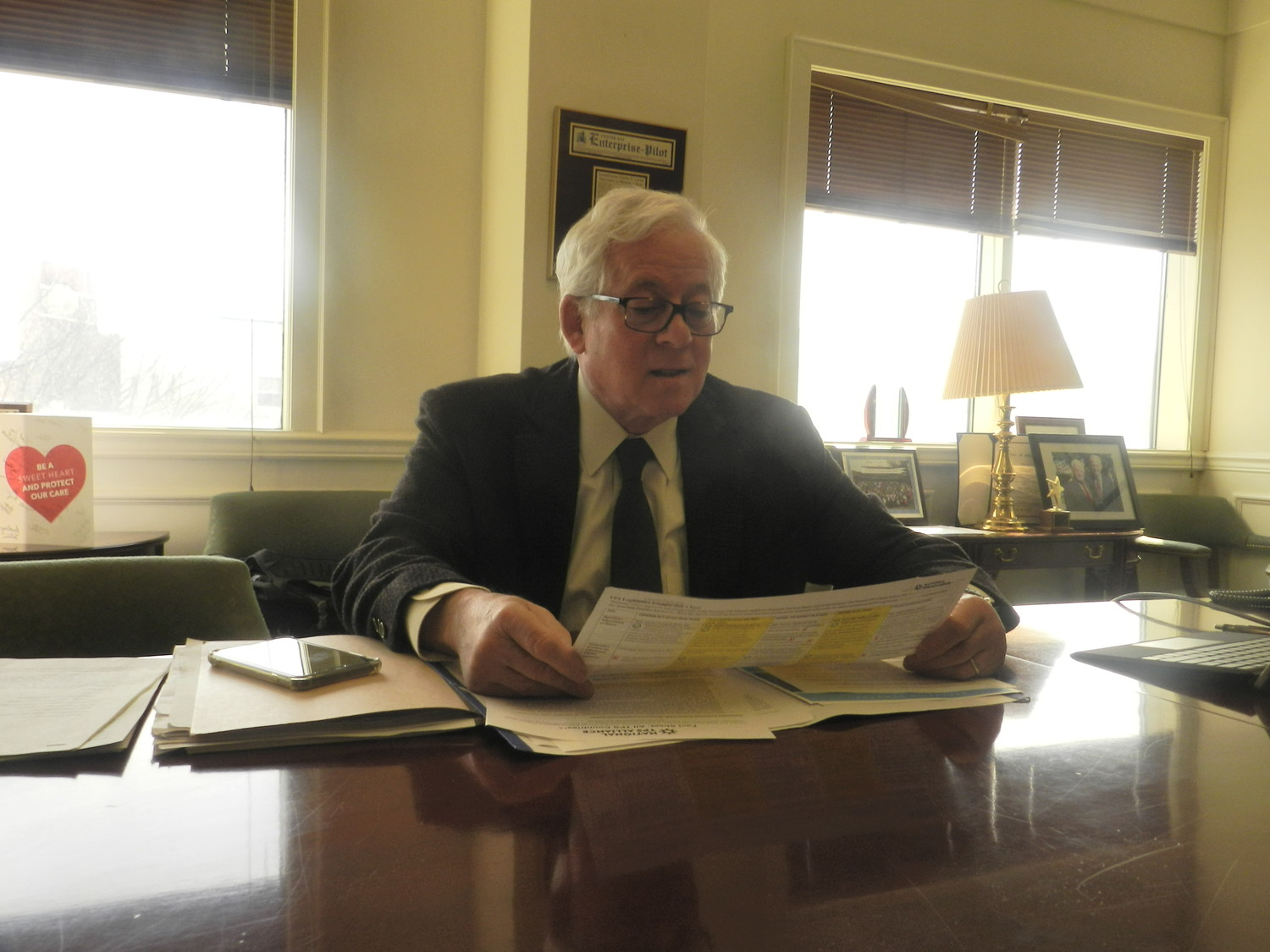 State Assemblyman Charles Lavine, a Democrat from Glen Cove, reviewed a list of legislative proposals that address the termination of temporary protected status on a national scale.
Alyssa Seidman/Herald

“TPS holders are really integral in the fabric of our county, and it seems cruel to uproot and destabilize the lives of these people.””
County Executive Laura Curran, Democrat from Baldwin

“Everyone who is here on TPS is legally allowed to be in the country. They were invited into the country, they’ve abided by the law, and some have been here for many years.””
Rep. Peter King, Republican from Seaford

“These people pay taxes, have jobs. They’re our neighbors, and [the cancellation of TPS] is breaking up our communities. We’re closing the golden door on them. This is wrong.””
Assemblywoman Michaelle Solages, Democrat from Elmont
By Nadya Nataly, Alyssa Seidman and Brian Stieglitz

When temporary protected status for Haitians was revoked last November, TPS recipients from other countries suspected they might lose their status as well.

“It’s been frustrating,” Cecelia Martinez, a TPS holder who is originally from El Salvador and now lives in Glen Cove, said in her native Spanish.

By early January, TPS for Salvadorans was canceled. Next on the potential chopping block is TPS for Hondurans, who have extended status through July 5.

Within days of the Salvadoran cancellation, Nassau County Executive Laura Curran and Suffolk Executive Steve Bellone, both Democrats, wrote a letter urging local congressional representatives to act immediately to halt the repeal. The letter stated that the termination would put 14,700 Salvadorans on Long Island and their families at risk of deportation, potentially causing chaos in the housing markets and economies of local communities with large Salvadoran populations.

Since then, Martinez and numerous other local TPS holders have joined Pro Residencia TPS Long Island, a local chapter of Alianza Nacional Pro TPS, a national immigrant-advocacy organization. “We want legislation for everyone on TPS,” Martinez said. “We stand united with Haiti and Honduras. Our goal is permanent residency and nothing less.”

Since the group was formed, Martinez said, it has reached out to federal, state and county officials who support initiatives to create a legislative path to permanent residency for TPS holders.

After numerous meetings with lawmakers, Martinez added, one of the group’s strongest allies has been State Assemblyman Charles Lavine, a Democrat from Glen Cove. He has been a vocal advocate, she said.

Lavine said he was committed to ensuring that TPS recipients remain protected. He believes the general public is unaware of the dangers the immigrant community faces because of “misguided federal policies.” The assemblyman’s hope is to shine a light on the issues at hand.

“Ideology trumping reality is a recipe for disaster,” Lavine said. “We are on the road to a great economic and human tragedy.”

“We need more support from the people, our neighbors, our friends,” Martinez said. “They can vote. We can’t. And that makes a difference.”

In a letter to Department of Homeland Security Secretary Kirstjen Nielsen, Velásquez argued that the agency failed to justify terminating TPS, and did not reach decisions in a timely, transparent manner, causing fear and uncertainty within immigrant communities. Eighty representatives and 17 senators signed Velázquez’s letter.

“The Trump administration’s capricious and arbitrary rulings affecting these immigrant families have not only been inhumane, but also raise significant legal concerns,” Velázquez stated in a news release. “We intend to find out how Secretary Nielsen is justifying these TPS decisions and hold the agency accountable.”

Long Island’s congressional representatives have taken bipartisan steps to oppose the cancellation of TPS. Last week, Rep. Peter King, a Republican from Seaford, and Rep. Tom Suozzi, a Democrat from Glen Cove, hosted a forum to discuss the need for comprehensive immigration reform and extend protections for individuals under TPS who are living in Nassau County.

During the forum, held at the Mid-Island Y Jewish Community Center in Plainview, Suozzi noted that elected officials whose constituents aren’t directly affected by immigration issues avoid discussing their solutions on a larger scale for fear of alienating their political bases. That is not the case with Suozzi, whose late father was an immigrant. In January, Suozzi spoke on the floor of the House of Representatives in favor of the immigrant journey, and urged his colleagues in Congress to protect it.

“The newcomers from Central America who had once gathered on street corners seeking work today own businesses and homes, and their children go to school with my children,” said Suozzi, a former Glen Cove mayor and Nassau County executive who was elected to Congress in 2016. “They’ve become an integral part of our community, and we can never forget that.”

King has written letters to the DHS and supported legislation, such as Velázquez’s proposal, favoring keeping TPS recipients in the United States. “There is no pattern, no indication of people on TPS going on welfare or being bad neighbors,” he said. “They are part of the community.”