Residents of E. Bedell St. say no to condos 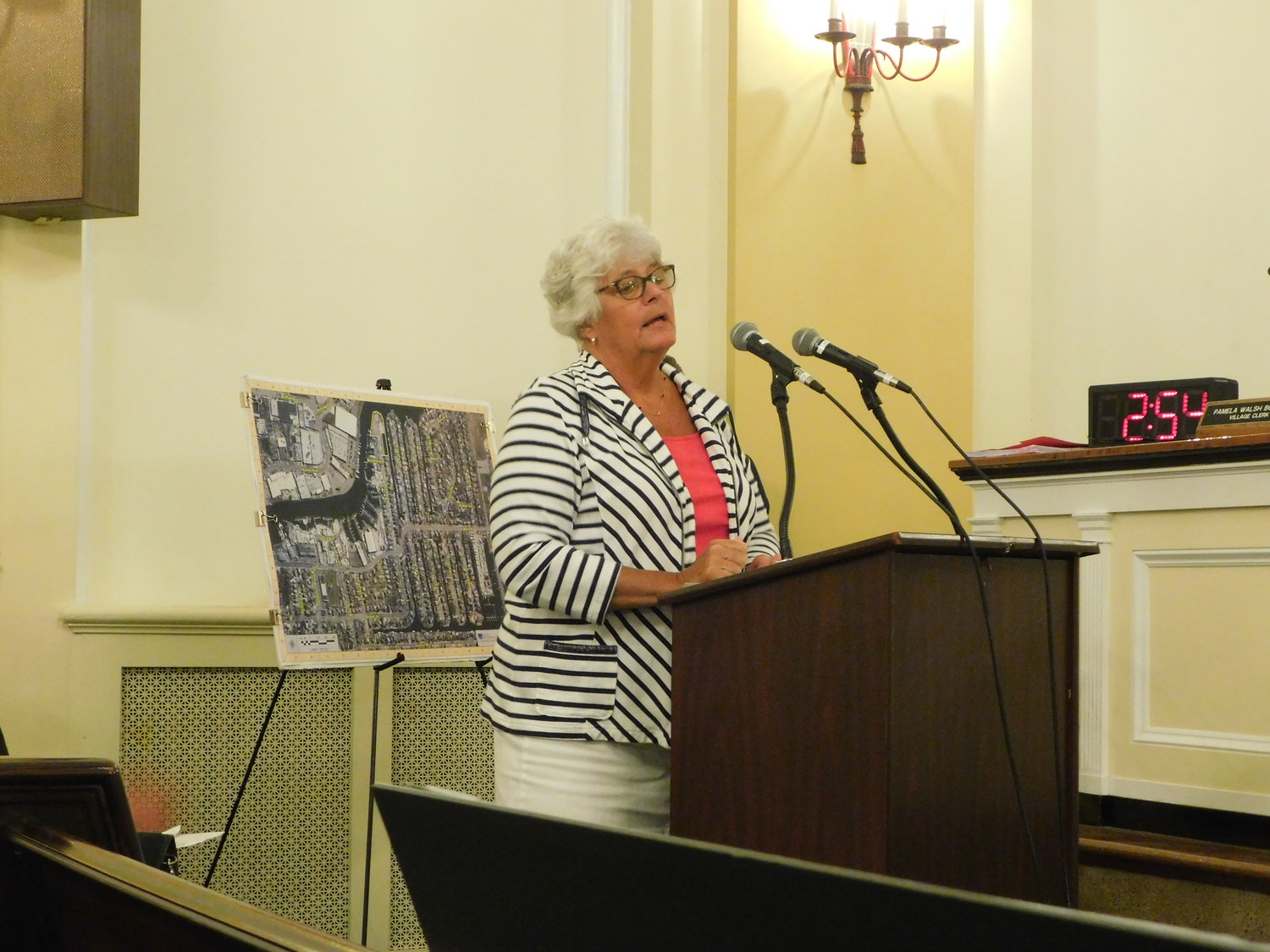 Freeport-based attorney Maurice Fedida, top, is counsel to Michael Solomon, also of Freeport, who is the attorney of record representing the petition to approve the condominiums.
Reine Bethany/Herald

James Prisco, the architect for the proposed 24 condominiums, presented renderings of how the finished buildings would look as well as a site plan and details about parking, walkable spaces, and recreation.
Reine Bethany/Herald 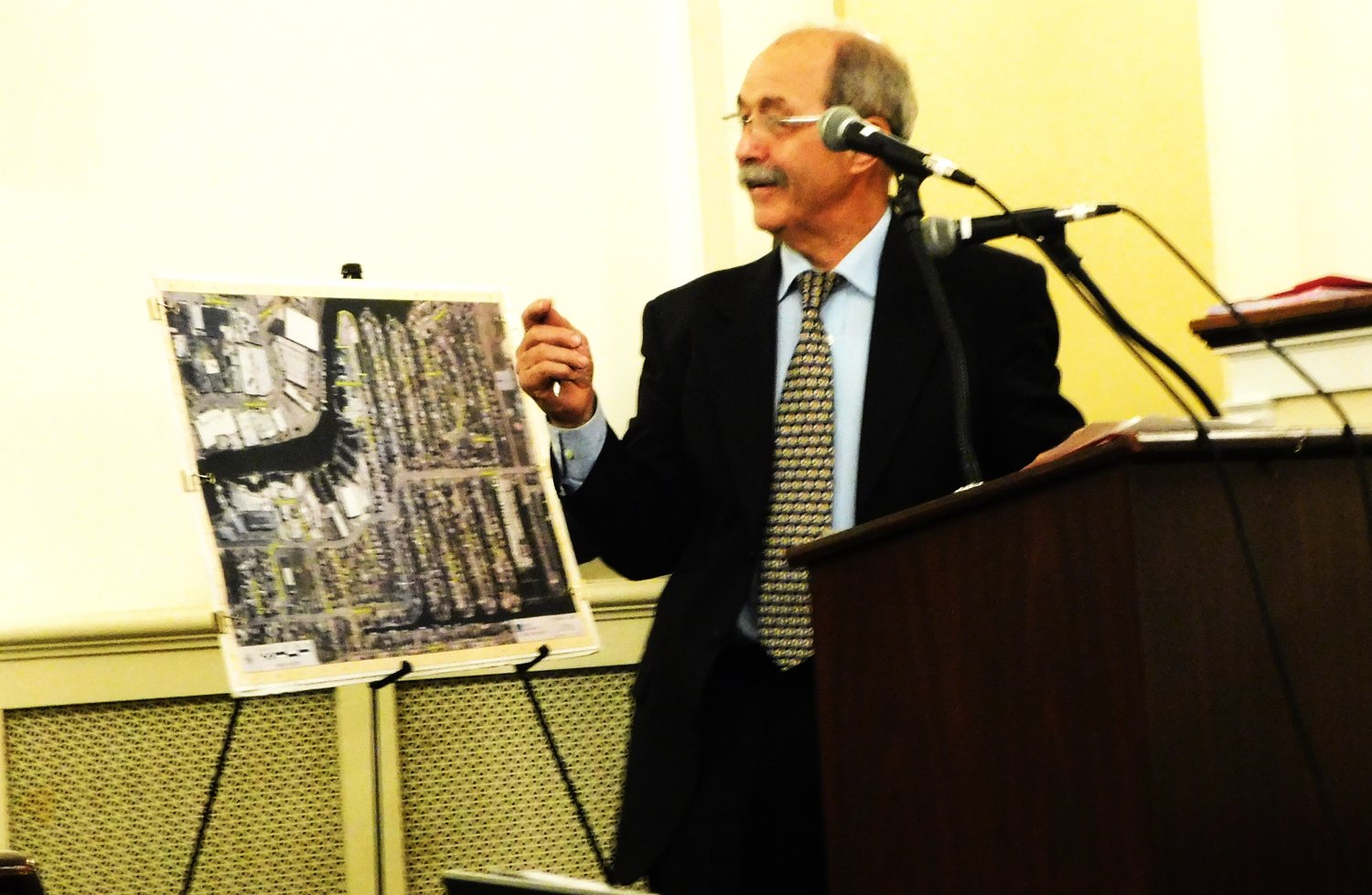 Maurice Fedida, the Freeport attorney representing the developer, answered questions from the residents who attended the public hearing.
Reine Bethany/Herald
Previous Next
By Reine Bethany

A proposed 24-unit condominium project for the empty lot at 104 E. Bedell St. met opposition from about 35 residents at a public hearing Monday night.

The property has been unoccupied since the financially troubled West Wind Yacht Club was damaged beyond repair in 2012 by Hurricane Sandy.

Freeport attorney Maurice Fedida began the presentations, calling architect James Prisco to the podium. Prisco used two mounted renderings of the proposed condominiums and a site plan to explain the project to the village board and the residents in attendance.

“The buildings will be fully FEMA-compliant,” Prisco said. “The main floor will have the kitchen, laundry facility, dining room, and a half-bathroom. The second floor will have three bedrooms and two bathrooms each. Landscaping and trees will be provided.”

Fedida next introduced Bellmore real estate agent Barry Nelson, who pointed out that the project would not incur a sudden jump in population density.

“The applicant would be permitted to build 54 units on the site,” Nelson said, because village code allows for one unit for every 1,452 square feet of the proposed development area. However, he continued, “The applicant wants to build 24 units, at approximately 3,269 square feet per unit.”

Garden City engineer Sean Mulryan conducted a study of the area that compared the traffic volume the projected condos would incur versus another business comparable to the former West Wind Yacht Club. The study showed a restaurant would generate more vehicles on the entering and exiting the street than 24 condos.

Board member Chris Squeri pointed out that the study compared condos to businesses nationwide, but Long Islanders differ from most areas because more residents have to drive rather than walk or take public transport to reach daily destinations. Mulryan explained that he also had studied the actual traffic pattern of another condominium already in place, the Ocean Watch at Harbor Pointe at the foot of South Main Street.

When Mulryan left the podium, Fedida commented that, since the pandemic, many more people work remotely from their homes, so Mulryan’s observed traffic patterns were plausible.

The E. Bedell Street residents who spoke from the podium during the public portion did not agree at all.  The street ends with a dead-end to the west and busy S. Main Street to the east.

“I don’t know many people who have three bedrooms who don’t have a car per bedroom,” said Ed Brennan. “I understand this proposal is saying two parking spots per unit. I don’t think that’s going to suffice. They’re going to be parking cars on our street.”

“Our block is bad because we have marinas over here, we have a constant flow of traffic from construction in and out, and it’s just a mess down there,” said Irwin Shangold. “Nobody stops at the stop sign, so just a matter of all the traffic going back and forth, it’s going to be a mess.”

“It’s going to be nothing but a hassle to everybody else on the block,” said Albert Thomas.

Rosemary Arcuri and her daughter Jeannene are the co-owners of Saltair Marina, at 93 E. Bedell St., a business founded by Rosemary’s parents 57 years ago.

“East Bedell Street is not like East First Street, East Second Street, East whatever streets,” Rosemary said. “We have three functioning businesses in the middle of our street. One has a gas stop. Did anyone ever stop to consider if there was a fire? How do you evacuate these condos when all the parking will be congested?”

Robert Giannuzzi, of East First Street, which also dead-ends at the water, said the traffic of the entire area would be intensified. “Twenty-four units? Forty-eight cars? This creates a traffic volume of 12 people leaving in the morning? Not possible,” Giannuzzi said. “Already when you hit the light at Main Street, it’s difficult to get out.”

“There are 38 homes on East Bedell Street,” said Carolyn Catinella. “Some people have four to five cars. We have to park on the street. We have three marinas and trucks coming down constantly. The streets shake. I don’t think you came down Bedell Street, Mr. Mulryan, because you have no idea what the traffic is like.”

“These people are taxpayers,” said Jeannene Arcuri, “who live and work and reside in the town where they are taxpayers. And they are losing the quality of life that they have.”

Fedida acknowledged residents’ passion. He and Nelson pointed out that the long-empty site looked run-down.

“The proposal is a substantial upgrade to the existing site,” Nelson said. “There needs to be something put on that property. It cannot stay in that state of disrepair. It’s a blight.”

“The community always wants less,” said Prisco, the architect, “and the developer gives concessions and the project goes ahead. Otherwise, the space just stays empty.

Juneteenth busted out all over