Rotarians offer the ‘Gift of Life’ to the underserved 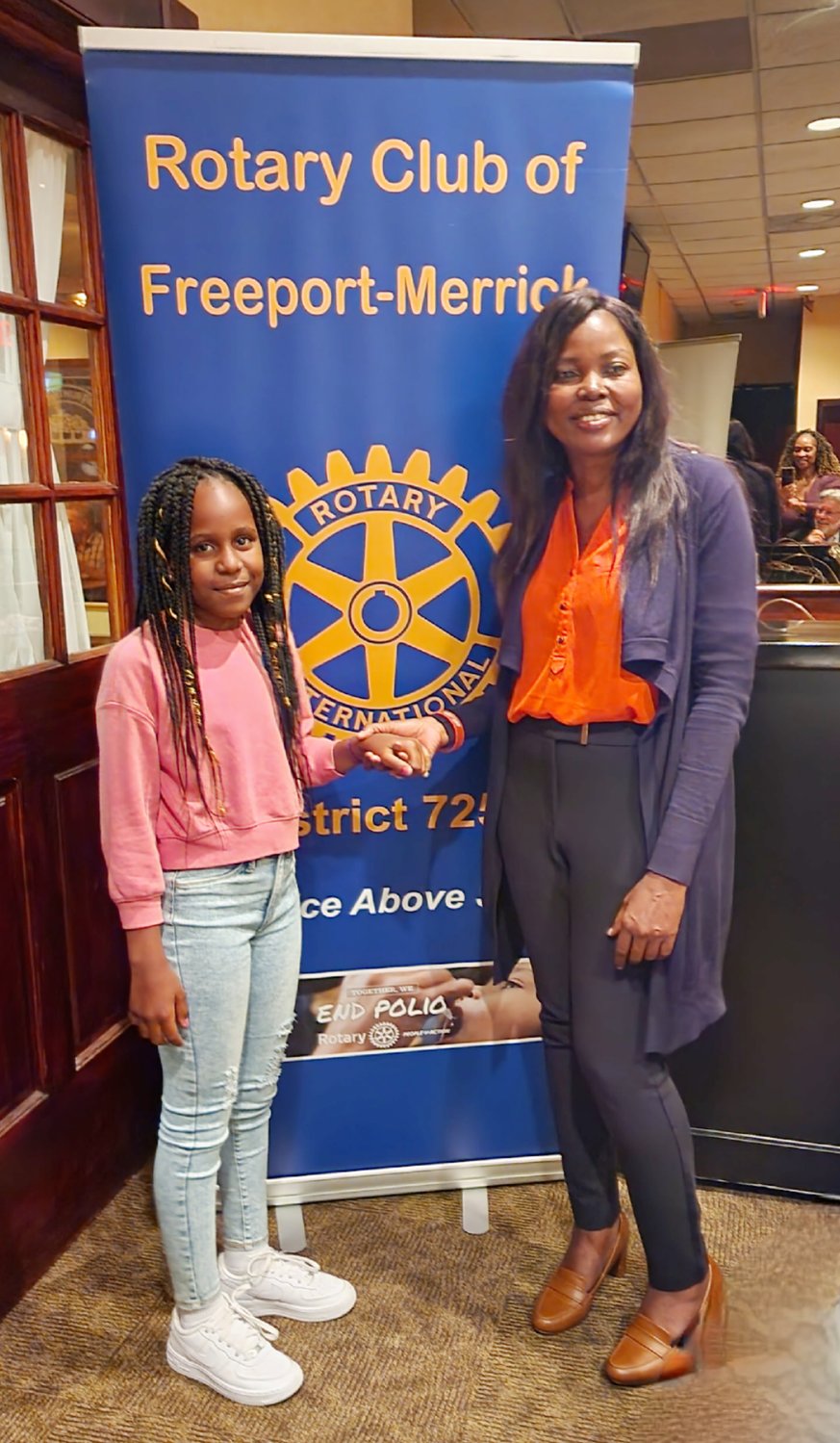 The Freeport-Merrick Rotary Club has lived by one slogan for more than 75 years: service above self. And this still resonates as the group continues to save lives of those from underprivileged communities.

In fact, Rotary members had a chance to see that firsthand when two people who directly benefited from the group’s Gift of Life program met at a meeting last month. And they’re not just any Gift of Life beneficiaries — they’re the first and the most recent.

“It was a pretty poignant event, because we not only had Thalissa — who’s the most recent recipient of the Gift of Life, we also had the very first girl who was the first recipient of Gift of Life back in the ‘70s,” said local Rotarian Mathew Kryder. She flew over here to join us and just be with us. And now she’s a grown woman,”

Not only is Agwaru grown, but she’s also a Rotarian herself, who now advocates for the Gift of Life program around the world.

Over the past 46 years, Gift of Life has helped children from 80 countries and five continents get much-needed treatment for heart disease and other ailments affecting that most vital organ. It provides cardiac and heart transplant operations for children in less-developed countries.

More than 80 Gift of Life affiliated programs exist in different parts of the world, making up a worldwide network of care. Most of these initiatives have their roots in Rotary clubs, like the Freeport-Merrick one.

Initially, sick children were flown to the United States for life-saving surgery, where they were welcomed by local Rotarians. But today, facilities are available in different parts of the world. So children like Thalissa can simply travel to the neighboring Dominican Republic for intensive care rather than make the long journey into the United States.

Funds raised are then used to either fly young patients in to receive necessary care, or to build facilities in other countries so they can get that treatment much closer to home.

Thalissa and her mom flew to the United States, while Gift of Life helped with the lifesaving surgery.”

Rotary International, the parent organization of Long Island’s 65-plus clubs, was formed in 1915 as a men’s humanitarian organization. Each club collaborates with their local governments to solve community concerns or extend their reach further by connecting with other groups internationally.

In the past, the Freeport-Merrick organization concentrated on local endeavors, such as supplying area food pantries. It also gives to the Long Island Cares’ Harry Chapin Food Bank, the Salvation Army food pantry in Freeport, and the Bellmore-Merrick Central High School District Community Cupboard.

“We are just local community members coming together and then finding whatever the needs are for the local and global community and raising money and doing charitable work,” Kryder said. “So, for example, like right now, we’re raising money to distribute these bags with turkeys inside them for Thanksgiving for families in need.”

The local group also provides shoes, socks and coats for the veterans through the Salvation Army, as well as numerous canned food drives.

“Sometimes we assist with blood drives,” Kryder said. “I mean, there’s countless things that we do.”

And then there’s the Gift of Life, and experiencing the results of those efforts first hand with the visit by Agwaru and the young Thalissa.

“Thalissa was the last one who came, had open heart surgery, and came and visited our club,” said Florence Marc-Charles, assistant governor and former president of the Freeport-Merrick club. “She was brought in because she had a cardiac problem that was extremely acute in that stage and would require open-heart surgery as soon as possible.”

Gift of Life negotiated with Northwell’s Cohen Children’s Medical Center in Queens for that surgery. Thalissa spent more than a week there, but the surgery was a success.

“Afterward, she spent the day at the Ronald McDonald House, which is right next to Cohen Hospital,” Marc-Charles said. “She was discharged fully, and the doctor gave her a clean bill of health. Her heart is functioning well.”

Another project undertaken by the Freeport-Merrick club in recent years has been supply a Haitian town with clean, easily accessible water. Set in the seaside community of Anse Pirogue, this particular program began in 2018 after a club member visited Haiti to help a summer program for deaf children and discovered the need for water there.

The purchase of potable water was the project’s most expensive piece of the program. Freeport-Merrick Rotarians encouraged club members to take on this project, which would not only give water to the village’s 200 people but would also allow the deaf children camp to remain at that location year after year.

Eventually, a deal was struck to drill a 170-foot well. Sadly, that resource had been contaminated by saltwater, and wasn’t potable. The club’s efforts continue, with the Freeport-Merrick club now collaborating with other Rotarians in North Carolina to desalinate the water.

Funding is still required to complete the next phase of this project. To donate, and to learn more about the Freeport-Merrick Rotary Club, visit FreeportMerrickRotary.org.