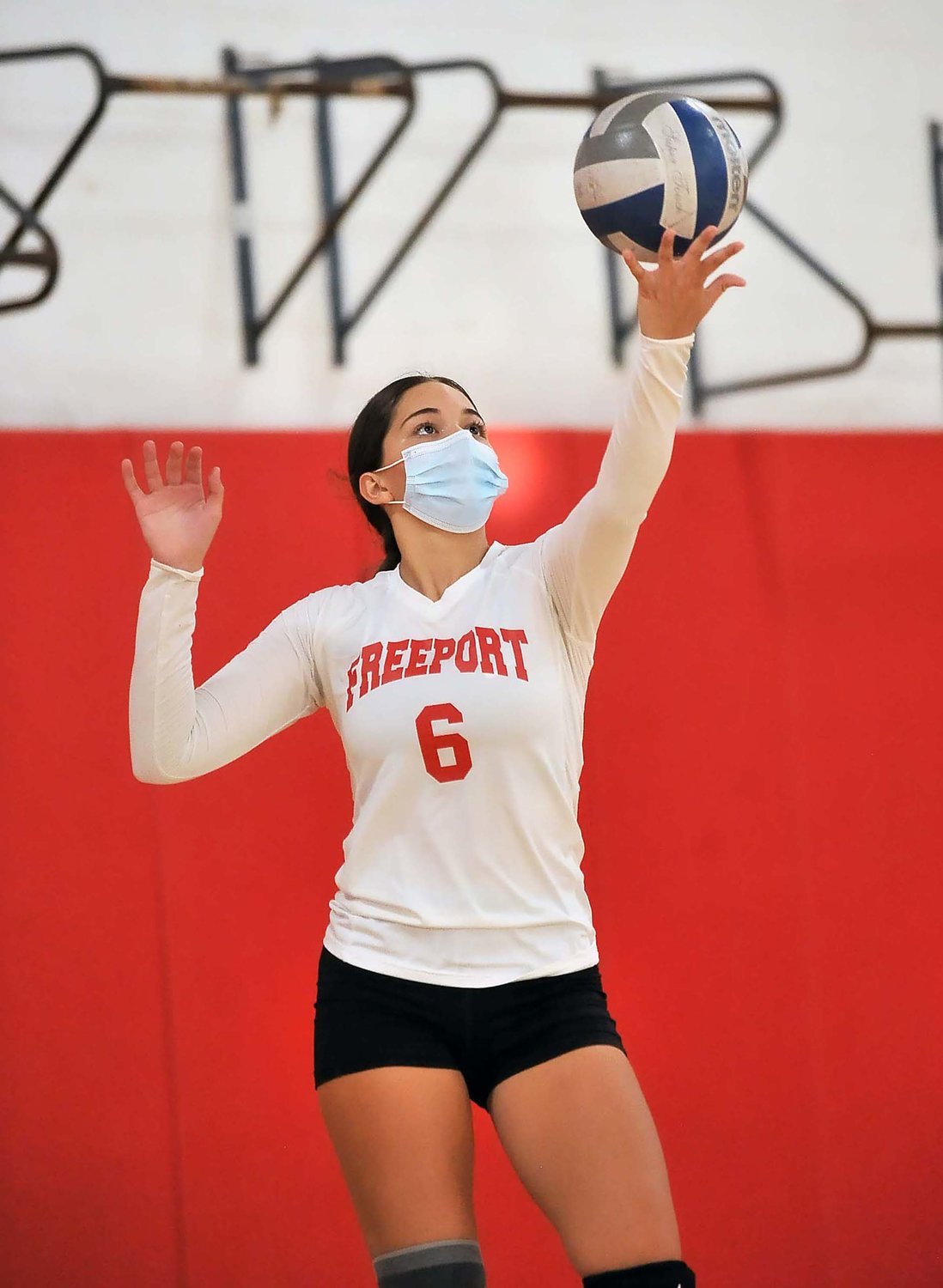 Senior Ariana Turcios has helped the Red Devils race out of the gate with a strong start on the court.
Anthony Hughes/Herald
By Jamie deJong

The Freeport girls’ volleyball team has gotten off to a fast start in their 2021 fall campaign. It holds a 4-1 record, with a loss to West Hempstead being their only blemish up to this point. Coach Eleanor Barry notices a few pertinent factors that have contributed to their proficiency in the early going.

“Dedication to the fundamentals has been very high,” Barry said. “Also, the returning players that we have are doing a great job of really embracing the new players of the team to get every on the same page.”

The Red Devils’ upperclassmen talent has been the primary catalyst of their success through the opening month of the season. Senior and captain Windney Destin is a returning leader. She is a three-year varsity player as an outside hitter and middle blocker. Barry referred to her as a “team leader on the court and motivator in practice.” Their second captain is Junior Zaria Chaplin, who is the primary setter and a varsity player since her freshman year. Barry believes she is “the most improved varsity player,” and has the most assists for the team over the last three years.

Senior Shelby Jackson is a starting middle hitter and a key to the Red Devils’ offense. “Shelby is an all-around and consistent player, and she brings a light-hearted side off the court that the players respond too,” Barry said. Jackson also is tied with Windney Destin for most service aces on the team. Senior Ariana Turcios has also been a key member of the squad, as Barry stated that she has brought “powerful and consistent serves and strong front row play as a right-side hitter.”

A few other key players round out their starting unit. Junior Talia Gunter has grown to be one of the best blockers on the roster as a middle hitter and middle blocker. Her quality as a blocker is reflected in the statistics column, as she currently leads the team with 20 solo blocks up to this point. Lisseth Gomez is a junior who has grown into a role of being both the starting setter and a competitive server. She has an impressive 53 assists as of this juncture. Sophomore Sejla Omeraagic is another who has worked her way into the starting role as an outside hitter. The starters are supported and assisted by substitutes Threisi Guerra, Tayla Baskin, Jaileen Almonte, Jessica Vigliotti, and Adrianna Pinzon.

The brevity in which the girls won their matches may be the most impressive element of their early season play. Out of the four matches they played against Westbury, Academy Charter, Uniondale and Locust Valley, only the match against Uniondale lasted more than 3 sets. They also took part in a tournament, which does not reflect in their official record or standings, but gave the roster surplus experience.

The Red Devils will look to keep their momentum going this Friday when they host Island Trees for a 5 p.m. start.