From Guy Lombardo to Marianne Endo, at the Freeport waterfront 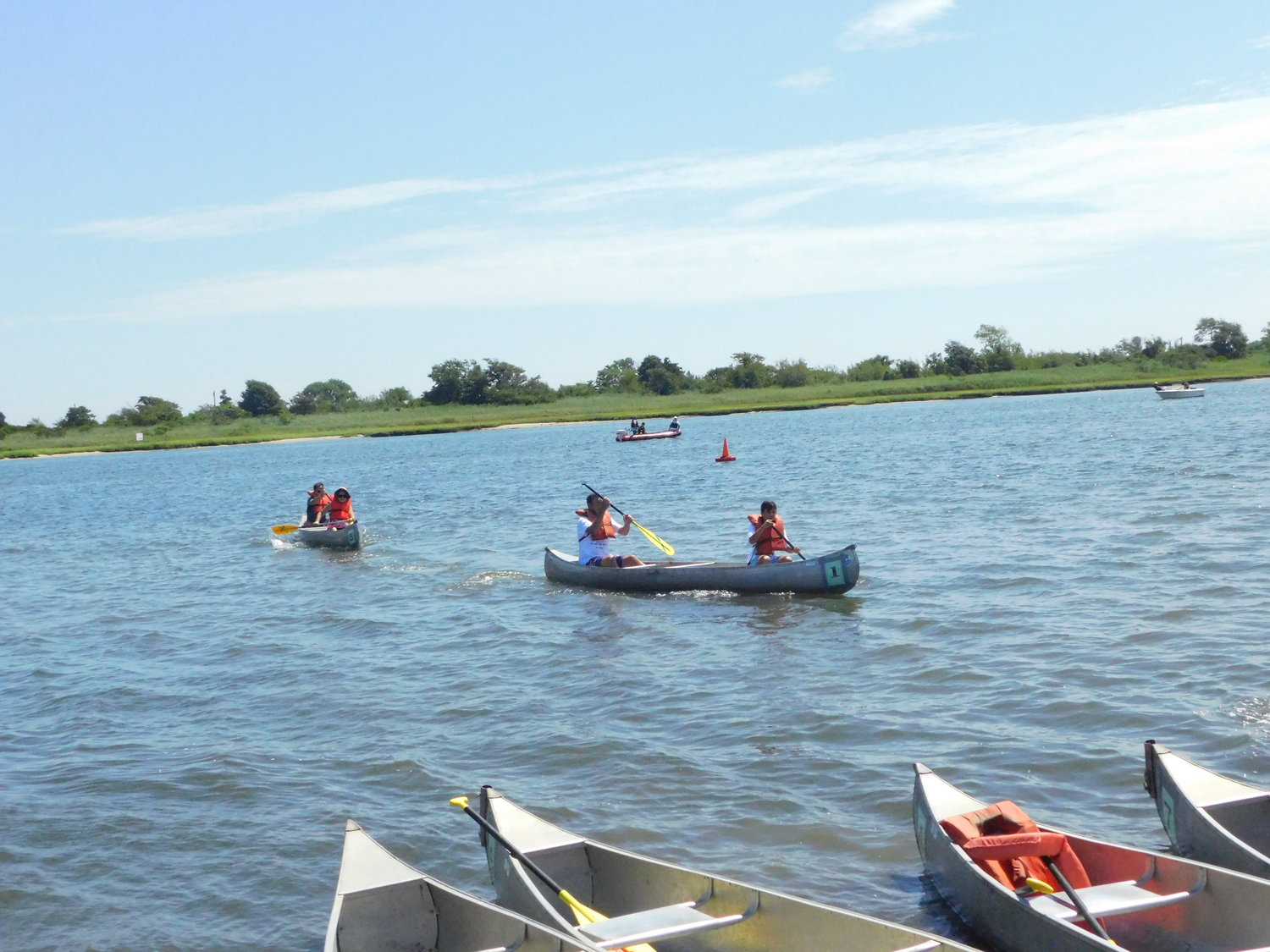 Paddlers carved through the waters off the beach at Cow Meadow Park in pursuit of medals.
Reine Bethany/Herald 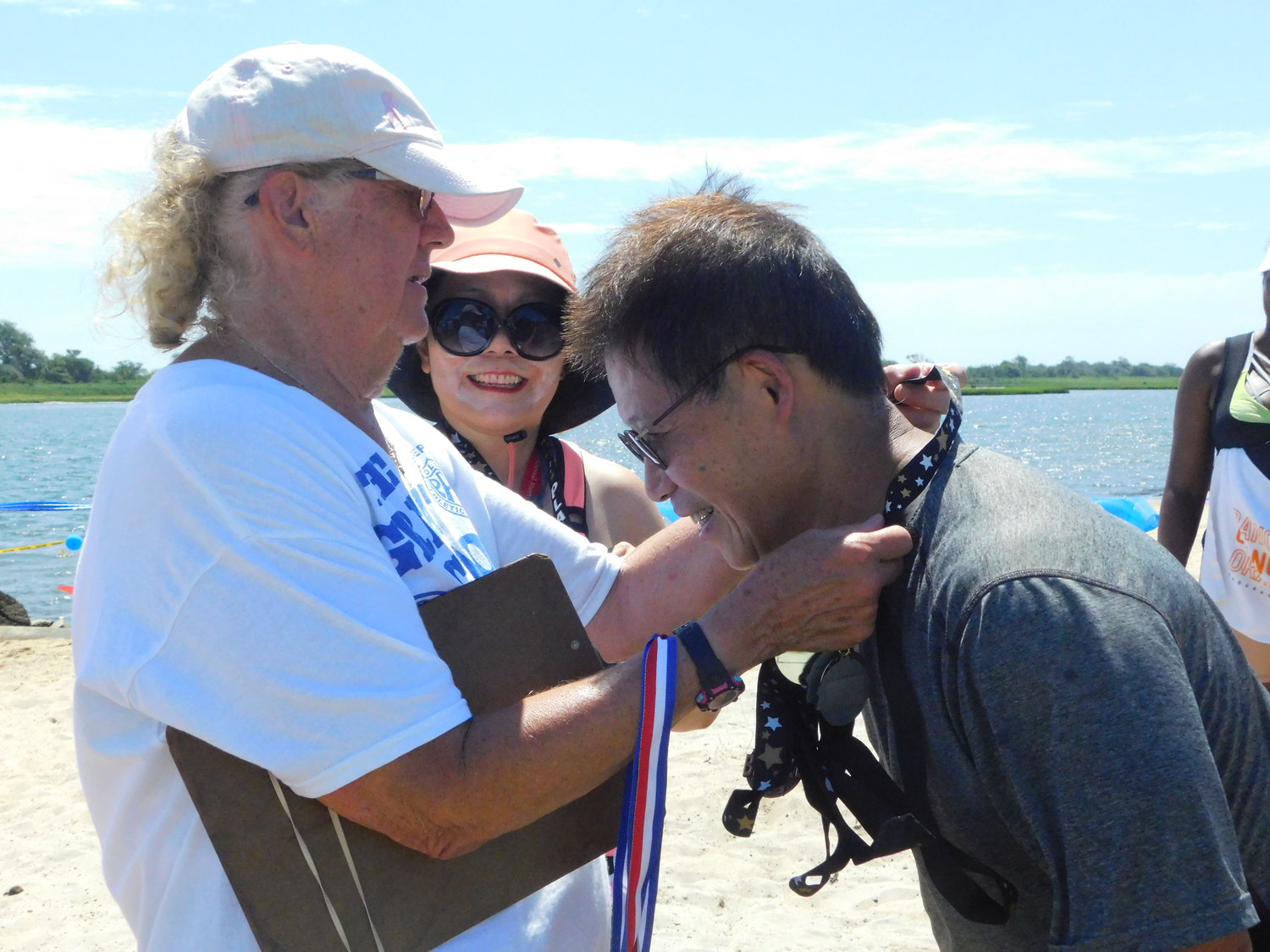 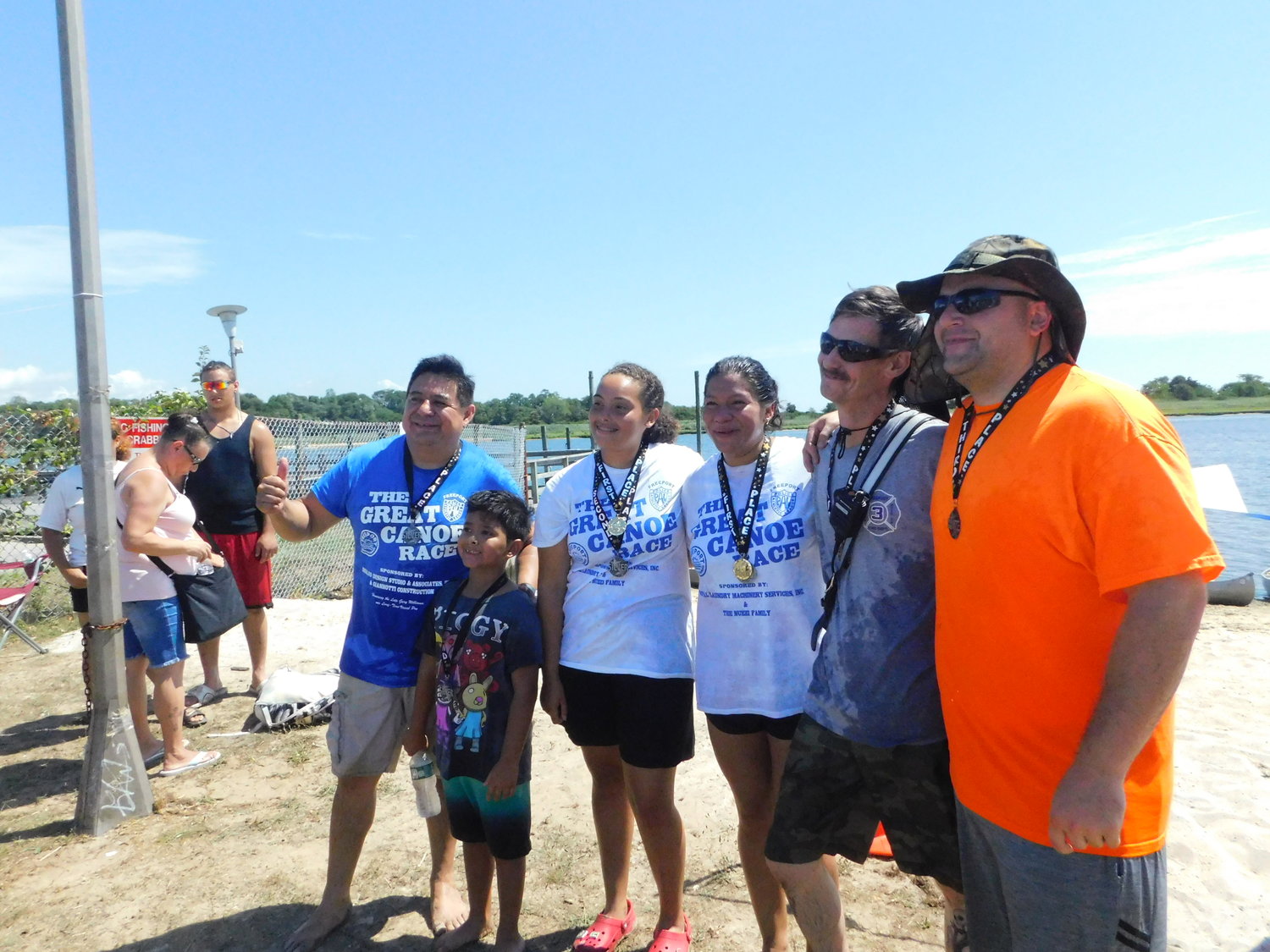 It's a challenge for the rowers. But it's a phenomenal view.”
John Nuzzi Sr., director and past president, Freeport Chamber of Commerce
By Reine Bethany

For 47 years, the Great Freeport Canoe Race has been a high point of the summer, in which residents and racers from surrounding communities come to the village’s marvelous waterfront for a memorable day on the water.

Most years, Waterfront Park, at the foot of South Long Beach Avenue, has served as the race launch point and endpoint. In 2018, and again this year on Aug. 7, organizer Marianne Endo dropped the start and finish flags from the dock overlooking the beach at Cow Meadow Park.

Freeport assumed ownership of Cow Meadow from Nassau County in February, and has been upgrading the entire park. “Rob Fisenne with DPW, they had this beach all leveled out with fresh sand for us,” said John Nuzzi Sr., a past president and current director of the Chamber of Commerce. “It was really a dynamite job.”

The Chamber, the Freeport Police Athletic League and the Village of Freeport co-sponsored the event.

Freeport Police Community Affairs Division Officer Bobby Ford, with officers Donnetta Cumberbatch and Samantha Sepulveda, brought along teenagers who participate in PAL. Each teen settled into a canoe with one of the adults and paddled across the shining, calm water, rounding the two buoys marking the route before returning exuberantly to shore.

Endo was pleased that the teens came. “Our community is surrounded by water,” she said. “These kids should be exposed to it.”

The blazing sun and 90-degree temperatures didn’t deter Assemblywoman Judy Griffin from racing Legislator Steve Rhoads and Officer Ford, with “lots of kibbutzah.” No winner was declared. Village trustees Chris Squeri and Jorge Martinez stood on the sand, cheering on the competitors.

Most of the canoes sliced neatly through the low waves around each buoy and triumphantly back to the launch point, but a few errors occurred. One canoe set off toward the wrong buoy. Two canoes nearly collided at the turn. One canoe wobbled along the shoreline, while watchers on the beach yelled, “Paddle on the left! Now the right!” The accidental shore explorers ultimately were towed back in by one of the two fire department boats poised near the race route.

“I love it,” said Jorge Ricky Flores, a South Bellmore resident who, with his 7-year-old son Josiah, took second place in their heat. “Any kind of community event, we support. Today we enjoyed a beautiful day and a beautiful view.”

“We just want to join the community, do whatever we can to have fun with the community,” said Gordon Guo, who lives on Gordon Place with his wife Ming Wu and grown son Jason.

“Compared to Waterfront Park,” said Nuzzi, “there’s a little bit more tide, more quickness with the breeze blowing in towards Freeport off the water. It’s a challenge for the rowers. But it’s a phenomenal view.”

Nuzzi thanked Kennedy, the village board, the Freeport DPW, and the Freeport Fire Department for supporting the race. “But ... I miss Les,” Nuzzi said. Lester Endo, Marianne’s husband, was an integral part of the  races until his death last summer.

“I was in the water with Les for the past 37 years,” said Nuzzi. “It’s rough. Last year’s canoe race, he was here. He just came straight from the hospital. He had stents put in. And then a week or so later, he passed away.”

“It’s supposed to be a fun, happy day on the water in Freeport,” Marianne said, “and that’s exactly what happened.”