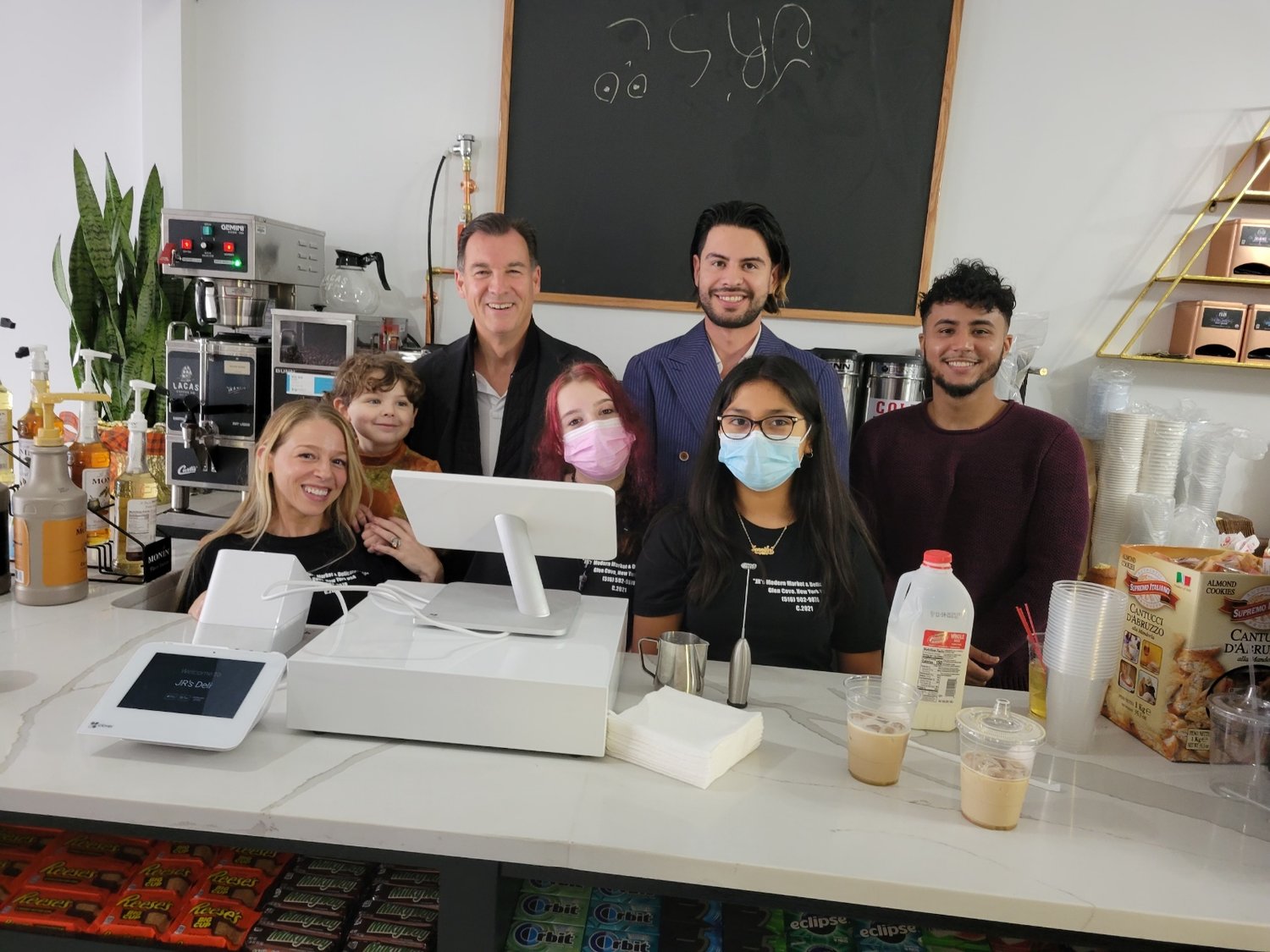 A longtime staple of the community is back in business, under new ownership. On Saturday, Jr.’s Modern Market and Delicatessen on East Avenue in Glen Cove opened its doors to the community with a ribbon-cutting celebration.

Formerly the South Ridge Deli, one of Glen Cove’s oldest businesses, the deli now has a modern look, but will stay to true to its purpose: convenience.

When the deli was put up for sale in 2020, two Glen Cove men saw an opportunity. Sebastian Lopera, 34, and Antonino McInnis, 26, both grew up in Glen Cove and have fond memories of the deli. Lopera grew up just blocks away, and now lives down the street.

After his son was born, heading to the deli became a daily activity, and was even more pronounced during the early days of the pandemic, when his son was about 3. “It was part of our routine to have a snack here, then go to Connolly School,” Lopera said. “It was super essential to us.”

The business was on the market for a high price, and the building was connected to a residential property next door. McInnis is a real estate developer who buys and rehabs houses in Glen Cove. He bought the house next door about 10 months ago, and originally had plans of turning the deli into a house.

“I couldn’t let that happen. It’s second oldest business in Glen Cove,” Lopera said. “He didn’t realize this is like a diamond in the rough.”

Lopera, who also works in real estate, partnered with McInnis to save the deli, and modernize it.

The pair faced many obstacles, including removing heavy deli cases and a sink that leaked, forcing them to replace the flooring, and level the floors, and replace some of the beams. The result is a sleek, modern look.

“I just basically wanted to bring it to the glory it should have been the entire time,” Lopera said, noting he drew inspiration from the model of Eataly, the Italian market. “I wanted to have a modern market here on Long Island, where you could come in, get a delicious sandwich, and also get regular household items and not have to drive all the way across town.

“That’s really the thing,” he added. “This place is so convenient to the people living here.”

As an adult, Lopera said, he has gravitated more towards New York City: he works there and most of his social life is centered around the city. “I never in my life would have thought I would invest my time and energy and money back into Glen Cove, but here I am.”

McInnis said his family has roots in Glen Cove that date to the 1940s. He was born in Glen Cove, lived here until age 8 before moving to Queens. He moved back about five years ago.

“Something is always calling us back to Glen Cove, one way or another, “ Lopera said. “I really believe in fate.”

Both plan to be involved in the day-to-day operations, especially in the beginning, and would like to eventually expand and open more locations. Lopera’s wife, Jessica Lopera, will also be involved the daily management, and their son, Sebastian London, is happy to have his deli back.

Lopera said a lot of the people in the neighborhood rely on the deli for basics that they don’t want to drive too far to get. Since the announcement of the reopening, he said, he gets asked daily when it will be up and running.

“I feel like, once you lose something, that’s when you really love it,” Lopera said. “The deli was always here, it was never really updated, but the convenience was the point. Once people lost that convenience, they were clamoring to come back.”

One addition to the deli is a full coffee bar, offering espresso and iced coffees. Jr.s' Modern Market & Delicatessen is open daily from 6 a.m. to 7 p.m.

Dinner with a side dish of the creeps