A history of community service 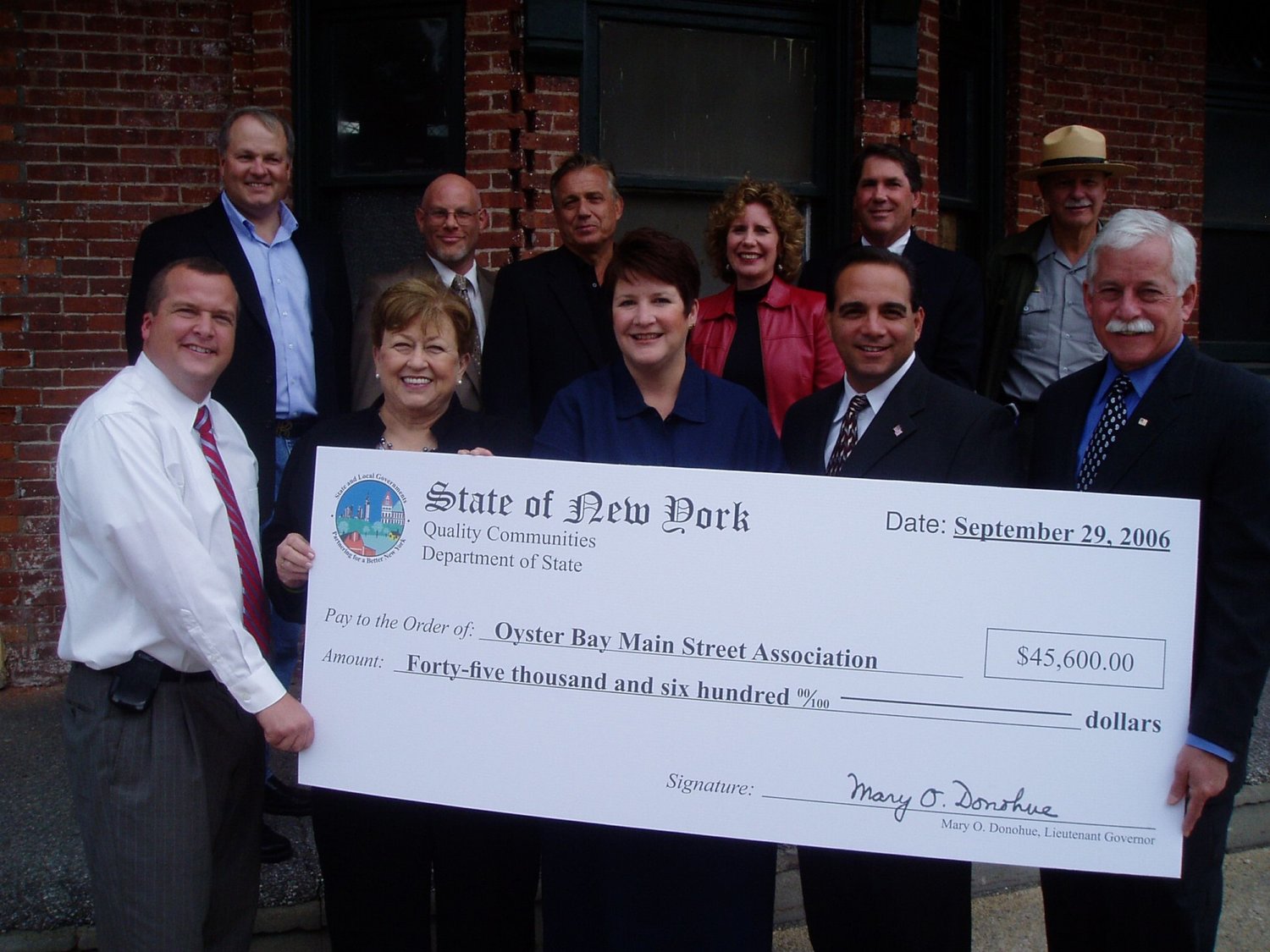 The Main Street Association was awarded a grant of $45,600 in 2006 for its plan to create a plaza entrance at the foot of Audrey Avenue, although the town ultimately chose not to implement it.
Courtesy Joan Mahon

We wanted to help the Main Street tenants with the economic development of the hamlet.”
Joan Mahon, Former executive director, Main Street Association
By Will Sheeline

The Oyster Bay Main Street Association has been in operation for over two decades, helping to invigorate the economy while preserving the integrity of the historic hamlet. Although it’s known for its current efforts, the organization has a history of supporting local businesses.
The association was formed in 2000, and its original six-person board met at the Bookmark Café, a space now occupied by Wild Honey. Its members were brought together by David Lamb, a landscape architect with family roots in Oyster Bay, and his wife, Daria.
Lamb had spent time in Washington, D.C., in the late 1990s with George O’Neil, a village trustee, learning about the National Main Street Center program. Developed in 1977, its purpose was to economically empower historic communities and support businesses that maintain the cultural and architectural heritage of places like Oyster Bay.
The Lambs gathered numerous friends and community members, including John Specce, who is now president of the Oyster Bay Railroad Museum. Af-ter roughly a year of discussing efforts to revitalize the hamlet’s economy, Specce re-called, the group created the Main Street Association.
“David Lamb was the person who brought this whole concept of Main Street to Oyster Bay,” Specce said. “We used to meet at the Bookmark Café, which David and Daria owned, where I was invited to join the board, and I was very honored.”


The association’s goal was to engage the public and private sectors to increase investment in and support for small businesses in town, while keeping Oyster Bay true to its historical roots. That idea attracted Katie Schwab, who had recently moved to Oyster Bay after working in economic development for the New York City government, who became the group’s first executive director.
“There were lots of people very interested at the time in really trying to polish up the slightly faded gem that Oyster Bay had become,” Schwab said.
“So we were able to have a board that represented diverse groups in the hamlet and tried to bring people together with a common vision.”
That vision would lead to numerous projects around town, all aimed at making it a more appealing place for people to visit and shop without compromising its unique nature. Some projects, such as the information kiosks that were installed in the late 2000s, have remained, while others never got off the ground.
Despite that, the Main Street Association has made a meaningful impact on the community over the decades — for example, repurposing the space by the Derby-Hall bandstand, outside the post office, for ice-skating. And it was the association that persuaded the Town of Oyster Bay to create a traffic circle in front of the Boys & Girls Club building.
According to Joan Mahan, who was executive director of the organization from 2003 to 2008, the best part of the job was working on interesting projects like these, which improved Oyster Bay without sacrificing any of what made it special.
“Nobody wanted to spoil downtown Oyster Bay, which we thought of as this treasure,” Mahan said. “We wanted to help the Main Street tenants with the economic development of the hamlet.”
Today the association continues to work on stimulating economic growth in the hamlet without compromising its heritage and charm. In 2015 it led the effort to renovate the post office lawn and create a plaza, while bringing more green community space to the downtown.
Meredith Maus, the group’s executive director since 2013, explained that it has always sought to promote the hamlet’s best interest, and will continue to do so.
“We’re looking forward to working alongside the Town of Oyster Bay to revitalize Fireman’s Field,” Maus said. “As always, we will look forward to working with organizations like Friends of the Bay to do cleanups and plantings in the hamlet. And a lot of the work we do is with our local businesses, to make sure they feel supported and that they’re in a supported atmosphere.”
The association will host its annual End of the Season Benefit at the Mill River Club in Oyster Bay on Sept. 22, which the public is invited to attend. For more information, check the organization’s website, OysterBayMainStreet.org.
Report an inappropriate comment