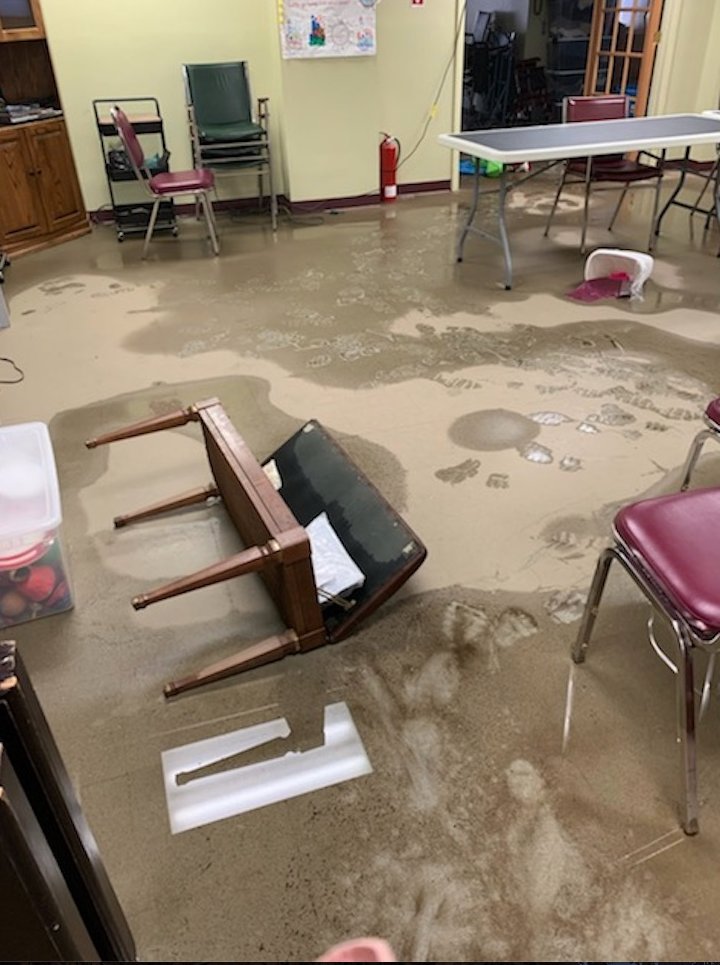 The flooding ruined the floor and the furniture on the lower level of the Glen Cove Senior Center.
Courtesy Amanda Freeman 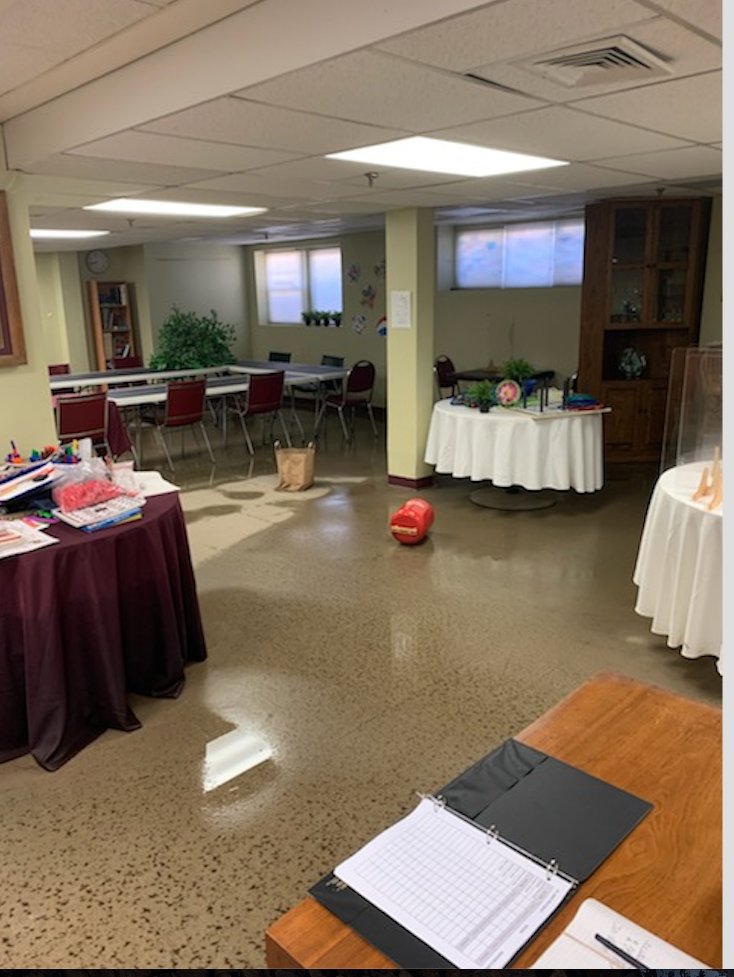 Even as it dried, the floor was covered in mud and stains.
Courtesy Amanda Freeman
Previous Next
By Jill Nossa

Just as the Adult Day Program at the Glen Cove Senior Center was regaining momentum, it was hit with an unexpected force of nature, necessitating the temporary closure of the program for the second time in a little over a year. Hurricane Ida flooded the lower level of the senior center, where the program takes place, on Sept. 2, and three weeks later, staff and members alike are still dealing with the aftermath.

“When I got to work that morning, I was shocked,” Amanda Freeman, director of the Adult Day Program, recounted. “I couldn’t believe the destruction that I saw. The flooding really just devastated the lower level of the senior center.”

The storm surge was so strong that large, heavy items were knocked to the floor, Freeman said, and the floors, furniture and kitchen were ruined. “We had to throw out the majority of our furniture, a lot of equipment and programming materials, which is essential for our program,” she said. “It was so unexpected.”

The Adult Day Program focuses on providing relief to family members caring for loved ones with cognitive decline or physical impairments, according to Freeman, who explained that many participants suffer from dementia or Alzheimer’s disease. The program offers structured social activities, education, recreation, and nutrition for those 60 and older, in a safe environment that encourages mental stimulation and socialization.

“The issue with our program having to temporarily close to in-person services is that it really created a hardship for our families,” Freeman said. “Since we’re a respite program, they’ve had to rearrange their schedules to make sure their loved ones are appropriately taken care of. The big chunk of the day, when their family member would have been here, in a safe environment and having oversight provided, they were at home, isolated, and that’s always a concern, especially with frail and aging populations.”

Freeman was hired in late April, weeks after the program reopened to in-person services after the coronavirus pandemic forced it to close in March 2020. This spring, she said, there were about 12 participants, and it had grown to about 35 by early September.

“The program lost so many participants throughout the course of the pandemic — not just from Covid, but from the decline caused by the pandemic,” Freeman said. “That’s one of the reasons this flood was additionally devastating, because we had just gotten to where we were at a rebuilding point, and we really wanted to continue to grow.”

Not only had the program grown, Freeman said, but it was also clear that participants had been benefiting from its services: Their verbal skills had improved, and they were more engaged in activities. “Having this temporary closure worries us so much,” she said, “because isolation can be devastating to individuals with dementia and Alzheimer’s. Decline can happen very quickly.”

On a positive note, the program has been able to continue with virtual programming, as it did throughout the pandemic, and has developed relationships with local museums, musicians and entertainers to enhance it. ”Obviously, Zoom isn’t reaching all of our families,” Freeman said. “In-person is just a higher quality of engagement.”

She said she was eager to resume the in-person program, and was hoping to take on more participants. Many regulars said that it had been valuable to them through the years. Lisa Boba, of Glen Cove, said that her mother, Carla, has attended for the past three years. “The program has been the most wonderful experience for her and a life-saver for me,” Boba said. “The activities they offer are well thought out and creative. Each day it’s something different. It gives me so much comfort to know that she’s happy and so well cared for by the staff.”

Patricia Langone’s mother, Margaret Langone, attended the program from 2017 until she died last year. “This program was more than a respite for my father, who was her primary caregiver,” Langone said. “On the days she was at the program, she was engaged and stimulated. There was music and dancing. They went on trips to local museums and theaters. She was always treated with kindness and compassion. This program brought joy to her days.”

Patricia said that her father, Robert Langone, of Glen Cove, is now attending the program. “This program is invaluable to our seniors,” she said, “who are most in need of a bright spot in their long days.”

Freeman said she has appreciated the outpouring of support from the community, and the work that the Glen Cove Department of Public Works has done to help restore the space. “As much as has been done, we’re still finding areas that have to be cleaned out, still finding items that have to be thrown out that we thought were salvageable but really aren’t,” she said. “We still have to replace the flooring. That is a big undertaking, and we’re waiting for funding to be allocated for that.”

The Adult Day Program is partially funded by the Nassau County Department of Senior Citizen Affairs through the New York State Office for the Aging, the United States Administration on Aging, the City of Glen Cove and the SAGE Foundation, though it also relies on participant donations. For those who are interested in donating, Freeman said, monetary contributions would be most appreciated. Donations can be sent to the SAGE Foundation, C/O Glen Cove Adult Day Program, 130 Glen Street, Glen Cove, N.Y. 11542.

Senior Center director Christine Rice called the loss “devastating,” but said the program could be up and running again next week. “We’re determined,” Rice said. “We got through the pandemic, and this is just one more stumbling block. We’re recovering faster than we thought was possible from the flood damage, which is important, because people are realizing that, due to the pandemic, this program and its services are needed now more than ever.”