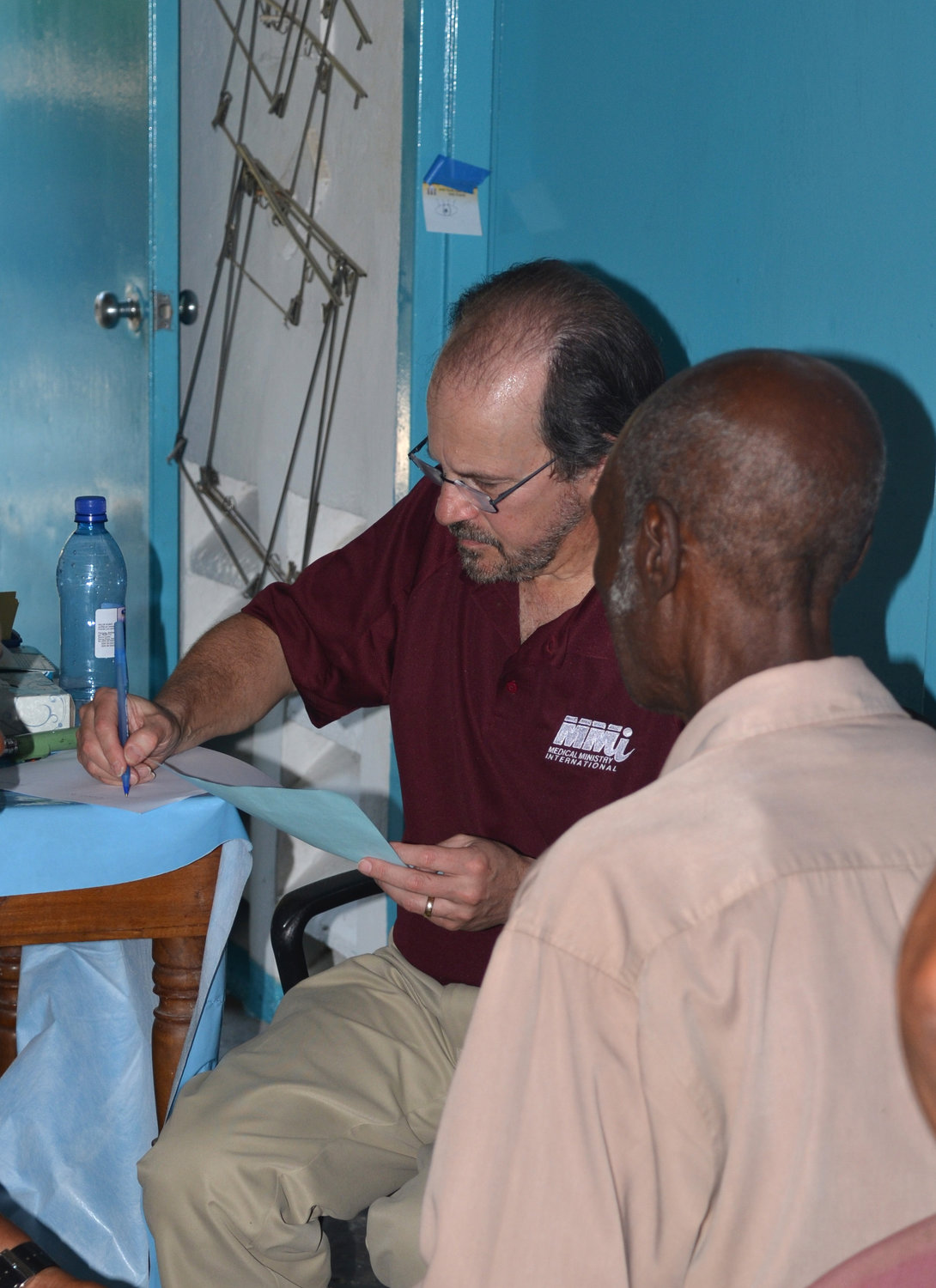 Dr. Robert Appel with a patient on a mission to Haiti in 2015.
Photos courtesy Robin Appel 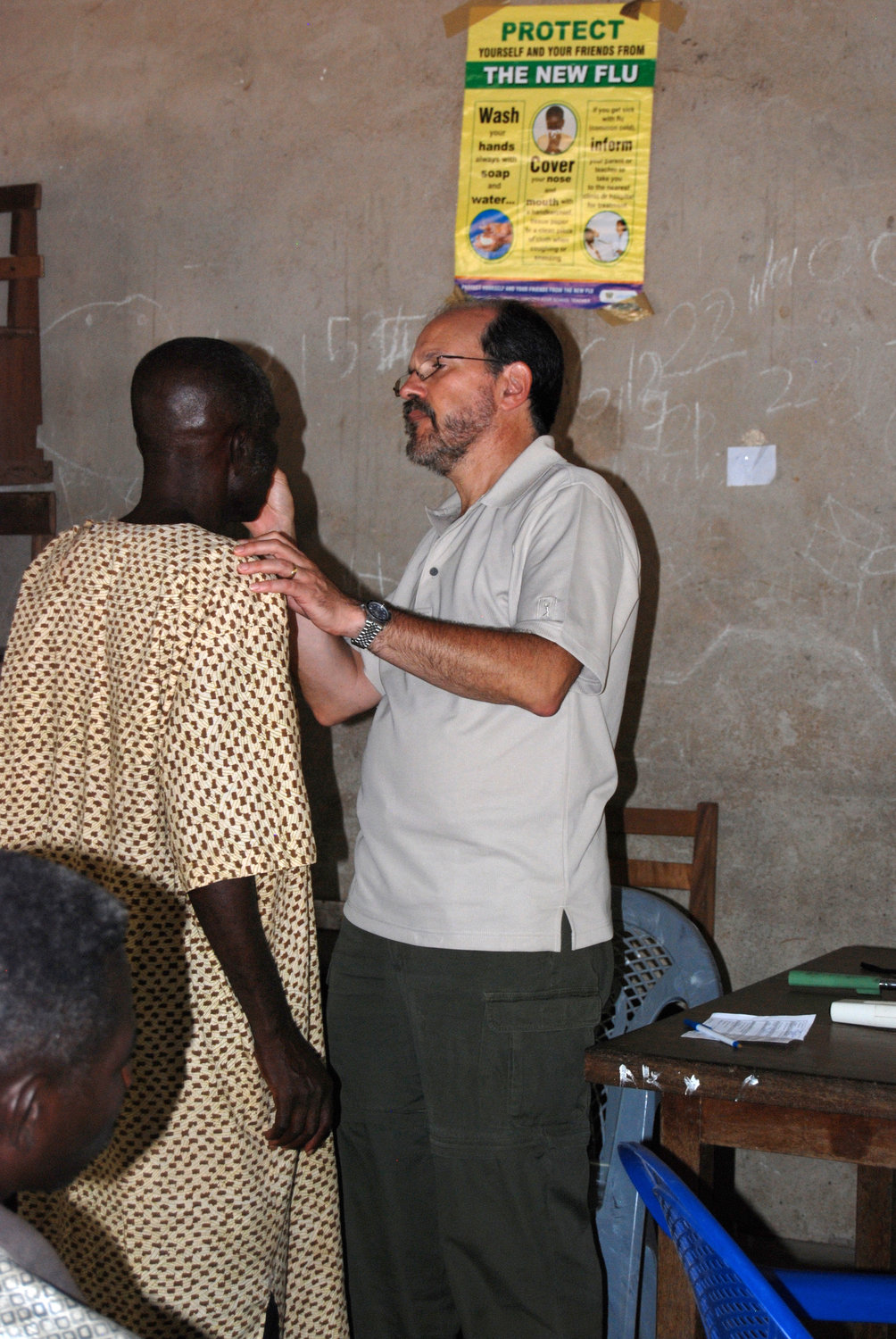 Appel checked out a patient in Ghana in 2010.
Photos courtesy Robin Appel
Previous Next
By Jill Nossa

After three and a half decades of helping to improve others’ eyesight, Dr. Robert Appel has decided to slow down. And while his hundreds of patients across the North Shore are sorry to see his practice close, patients abroad, as well as medical students, will still benefit from the ophthalmologist’s skills.

Appel, 72, will retire from his practice on Forest Avenue in Glen Cove in November, but will continue to teach cataract surgeries to residents at Northwell Health in Syosset, to serve on the boards of various organizations and to participate in mission work overseas.

When Appel, of Glen Head, chose ophthalmology as a specialty, he knew he would be able to serve a range of patients. He did not realize at the time what a significant and far-reaching impact he would have on others.

As a medical student at Cornell Medical School in the 1970s, Appel was introduced to the challenges and rewards of working abroad. “When I finished my training [at Boston University] I decided I wanted to do more work abroad,” he said. “After residency, I did some short-term volunteer stints in Africa, got a job in a government hospital in Soweto, in South Africa, and worked there for a couple years.”

He then got a job in New York and took over the practice in Glen Cove in 1986. “But I always had it in the back of my mind to be able to some work abroad, at least short term,” he said.

About 10 years ago, Appel finally went back to that idea, and took his talent to underdeveloped areas.

“It’s an opportunity to practice medicine the way you were taught without regard to any government oversight or having to worry about reimbursement,” he said. “You’re taking care of people who really need the care and don’t have access to it any other way.”

Appel is on the Board of Directors for Izote, a nonprofit founded in Sea Cliff in 2010 that serves the people of El Salvador. He is also on the medical staff of Sights on Health, a nonprofit serving the people of South Dakota, Ecuador and Peru.

Risa Procton, president and executive director of Izote, said that the nonprofit began with a mission of creating literacy programs in the libraries of rural schools in El Salvador. “At the same time we wanted to do something for cataracts,” she said, “which is a huge problem in the developing world. It’s very easy to solve but there’s no access to care to a very simple surgery.”

Around that time, Procton said, she read a story in the local paper about Appel going to Africa to perform surgeries, so she called him. “He signed up,” she said, “and has been working with us ever since.”

Appel volunteers his time to perform surgeries, working with a local eye surgeon in a public hospital. The organization raised money to purchase the operating microscope necessary to perform the surgery, and Appel consulted on the type needed.

“He has provided all the expertise and led two surgical missions,” Procton said. “We couldn’t have done any of it without him.”

This year, Izote did a letter-writing fundraiser and raised $10,000, enough to buy a special laser that can correct blurred vision that can sometimes occur after cataract surgery.

Appel said he has gone on a total of 15 missions over the years with various groups, the last one being in February 2020.

“My main connection is to do cataract surgery with them, which is one the few operations that you can actually show up and bring most of the equipment that would you need to set up in a place where it might not be available,” Appel said of his mission work.

The patients have a short-term recovery, which also makes it easier to do overseas, and it makes a big difference in people’s lives.

“Even for a short-term clinic you can make a big difference for them,” Appel said, “more so than what you generally do at home.”

In the United States, Appel said, most people get cataract surgery when they have minor vision issues, such as not being able to read the newspaper so well, or having trouble with lights or glares while driving. “But abroad, it’s mostly a matter of not being able to see, practically being blind,” Appel said. “That not only affects that person, but it means that somebody else has to care of them, which means a whole family might not have any income because they aren’t able to work. So the impact is much bigger when you do that work abroad.”

Appel and his wife, Robin, moved to Glen Head from New York City in 1995, as both their family of four and his practice were growing. During his time in Glen Cove, Appel has known his patients from their first pair of eyeglasses to their cataract surgery. For many in the community, Appel has been the trusted family ophthalmologist for generations.

John Grella, 55, of Glen Cove, has been seeing Appel “for decades” and said he’s the preferred family ophthalmologist, as his mother, sisters, wife and son are also patients. “He’s been working on my eyes for a very long time,” Grella said, “and he really cares about the health of his patients.”

Grella said one of the ways Appel has earned his trust is by monitoring the condition and not rushing in to surgery or medications. On top of that, he said, he also knows when to refer patients to other specialists.

“He’s not just an excellent surgeon,” Grella said, “but he knows where to send you.”

Grella said he owes his sight to Appel, who caught a deteriorating condition in time. “I would possibly be blind without him.”

Rich Barrett of Sea Cliff has been a patient of Appel’s for the past 25 years. Appel performed cataract surgery on him and has been treating him for glaucoma. “He’s a terrific doctor and I really admire him; he’s a true humanitarian.”

Barrett said that, over the years, he and Appel have developed a friendship of sorts, and found a common ground with discussions of travel. “He’s treated me so well over the years and fits me in whenever there’s a problem,” Barrett said. “I’m happy for him, but am disappointed to see him retire.”

Amy O’Regan of Glen Cove has been seeing him for about 20 years. Due to the condition of her eyes, she said, she sees several doctors and goes to Appel every four months. “He’s soft-spoken and has a calming manner, and I need that,” she said. “I have a number of problems with my eyes, and he’s very thorough, always explains things to me and never rushes. I also have great respect for his humanitarian efforts. He’s just a good guy, and I’m very sad to see him go.”