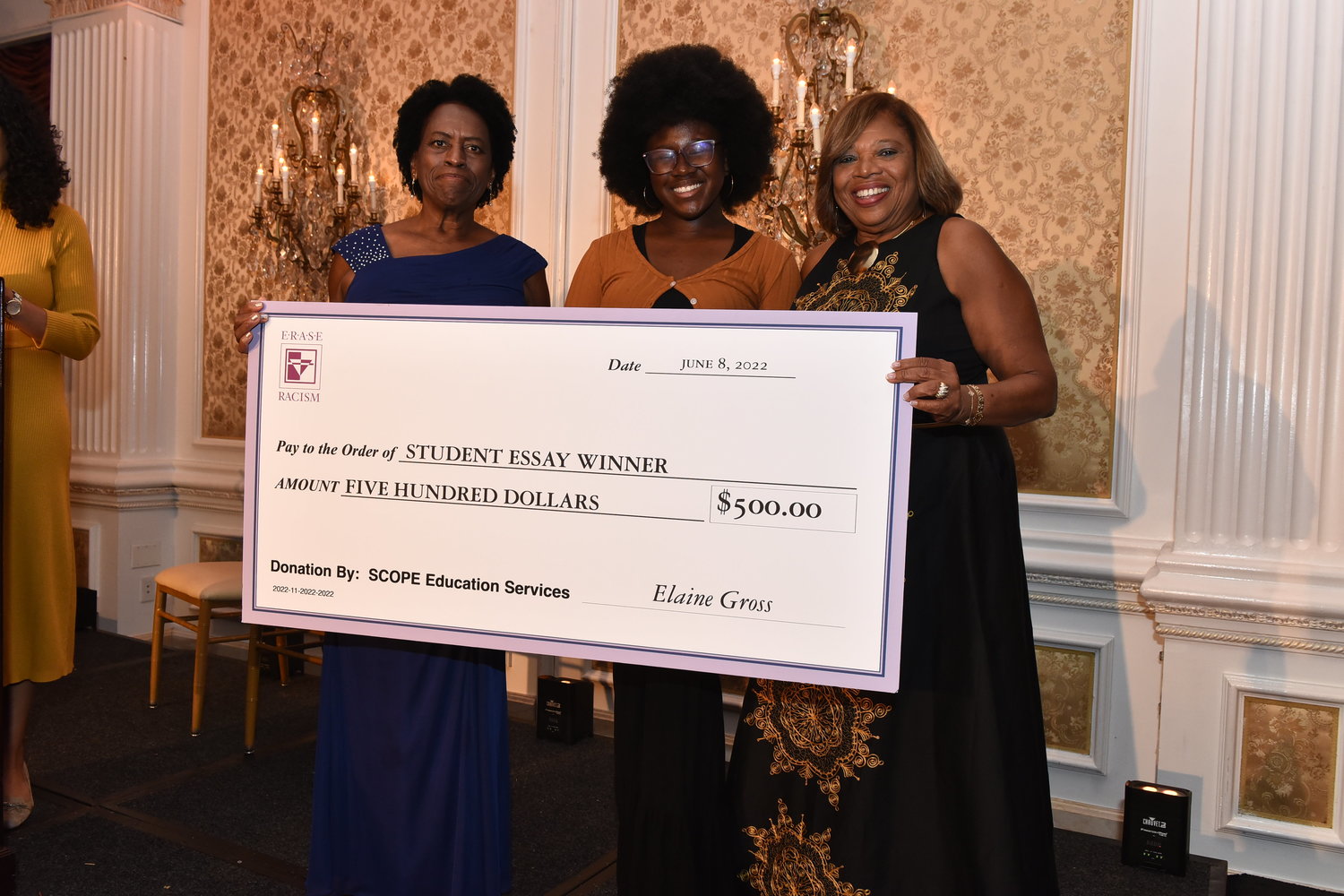 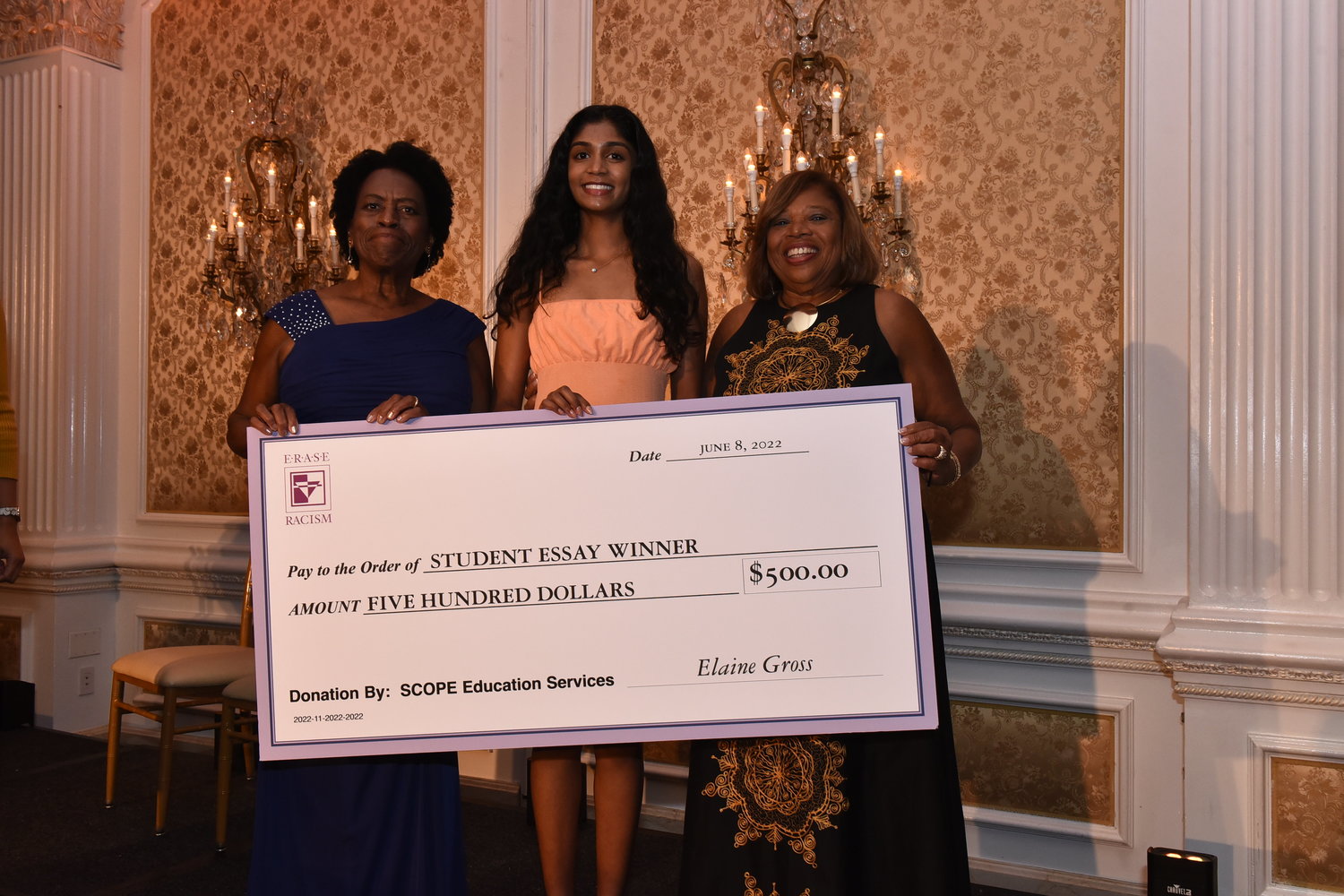 Student writer Kareena Sukhnanan is presented with a $500 check at the Garden City Hotel.
Courtesy of ERASE Racism
Previous Next
By Kyle Chin

Two Malverne High School seniors know what it takes to combat racism, each winning a $500 scholarship from ERASE Racism for expressing their views in writing.

Kayla George and Kareena Sukhnanan were among four student writers honored at Garden City Hotel on June 8. The students were tasked with relating a recent event or personal experience to the importance of race-conscious education.

“The hate exuded by the bias against coarse-textured hair is something that should be acknowledged, taught, and combatted in schools,” George wrote. “The message of discrimination against students of color in various schools is that black students are not and will never be good enough for this society.”

This clarion call against racial bias won George a scholarship from ERASE Racism, an organization dedicated to fighting systemic injustice in housing and education.

Reflecting on an issue personal to her, George wrote about the continued stigmas against natural black hair in schools and “professional” settings. She recounted instances from around the country in which students sporting dreadlocks or un-straightened hair were told that their hair was unacceptable for school programs and events. She said that such instances “set the belief that thick and coarse, especially seen mainly amongst black students, is unacceptable in a place of education. They create the narrative that students will not be accepted for who they are because of their race or background, no matter how hard they work.”

President of ERASE Racism, V. Elaine Gross, said of George’s commentary: “Some will try to minimize this issue’s importance, but it is no small thing to feel like part of you is not valued, especially as a young person. In its own way speaking up on hair discrimination challenges white supremacy. It challenges what’s assumed in our society to be ‘good’ and ‘normal.’”

The issue has received increasing coverage in recent years. The 2009 Chris Rock documentary, “Good Hair,” or the 2019 Oscar-winning animated short, “Hair Love,” both discussed the importance of hair to the Black identity. The issue of bias against Black people who wear their hair naturally has drawn the attention of legislators as well. In her essay George referenced the Crown Act, a law originally passed in California and adopted in several other states forbidding discrimination based on hair texture and style. A federal version of the law has been passed by the House of Representatives but has failed to pass in the U.S. Senate.

Sukhnanan, George’s classmate, is no stranger to taking government action against racism. She spoke out before the Malverne Board of Trustees in support of changing the name of Lindner Place, a street dedicated to Paul Lindner, who was a prominent leader in the Ku Klux Klan.

“To me, commemorating should be done to honor an individual for their righteous legacy, character, and unceasing sacrifices that infiltrate our society today,” wrote Sukhnanan. “He initiated the burning of minority-orphanages, led hateful marches with thousands of attendees, and cross burnings across my own peers’ homes.

“There’s been back and forth on this for a while now,” Gross said. “But Kareena was persistent, she didn’t give up the first time around, and for that I commend her.”

Gross drove home the importance of the two honorees’ messages.

“We’re very excited to see students talking about something so personal to them and that they feel deeply about, especially as some may disagree with and disregard them.

“These are difficult times, and on many of these issues adults have frankly done a horrible job,” she added. “Hopefully, children will be able to set things right. When students have the opportunity, I believe they can.”