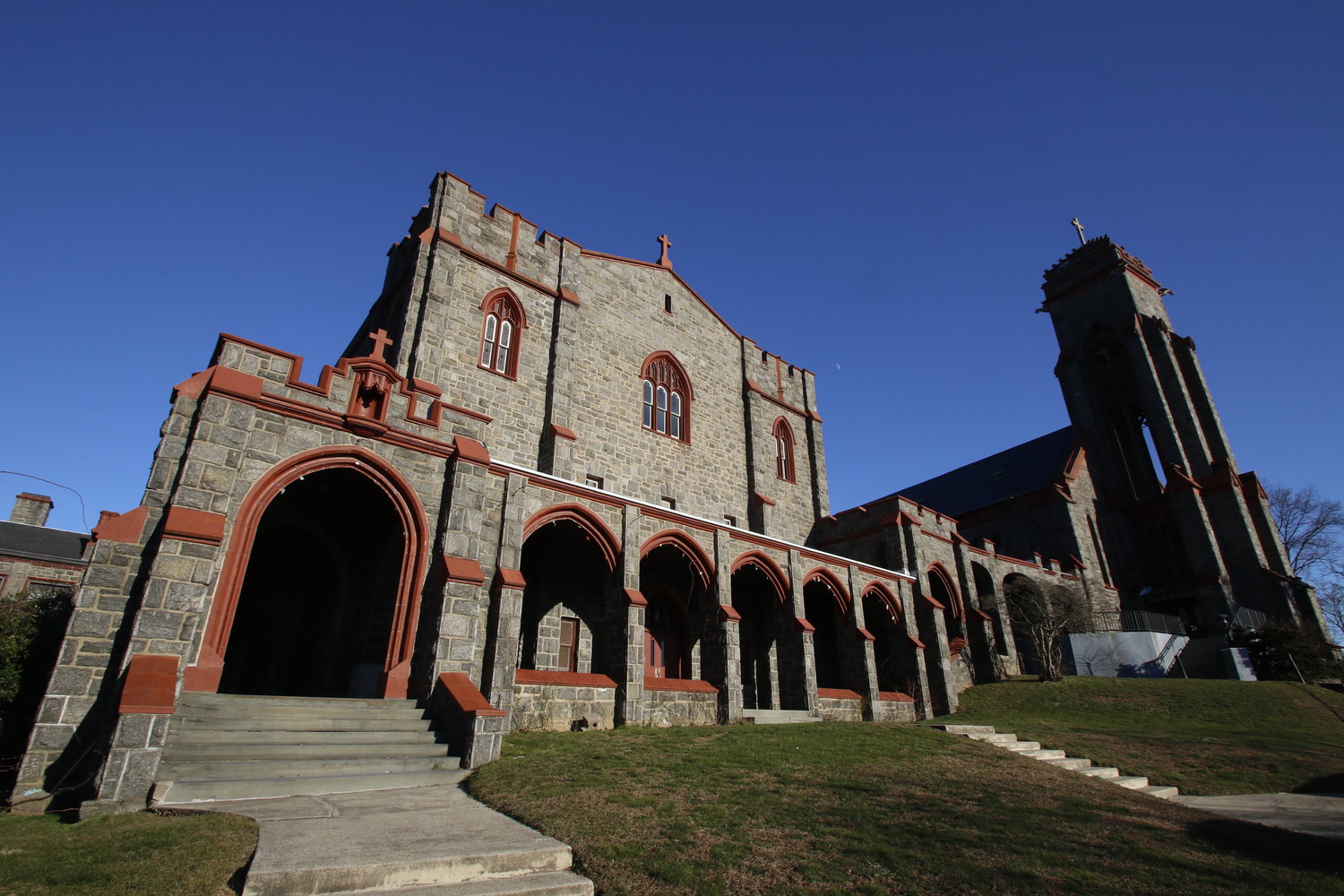 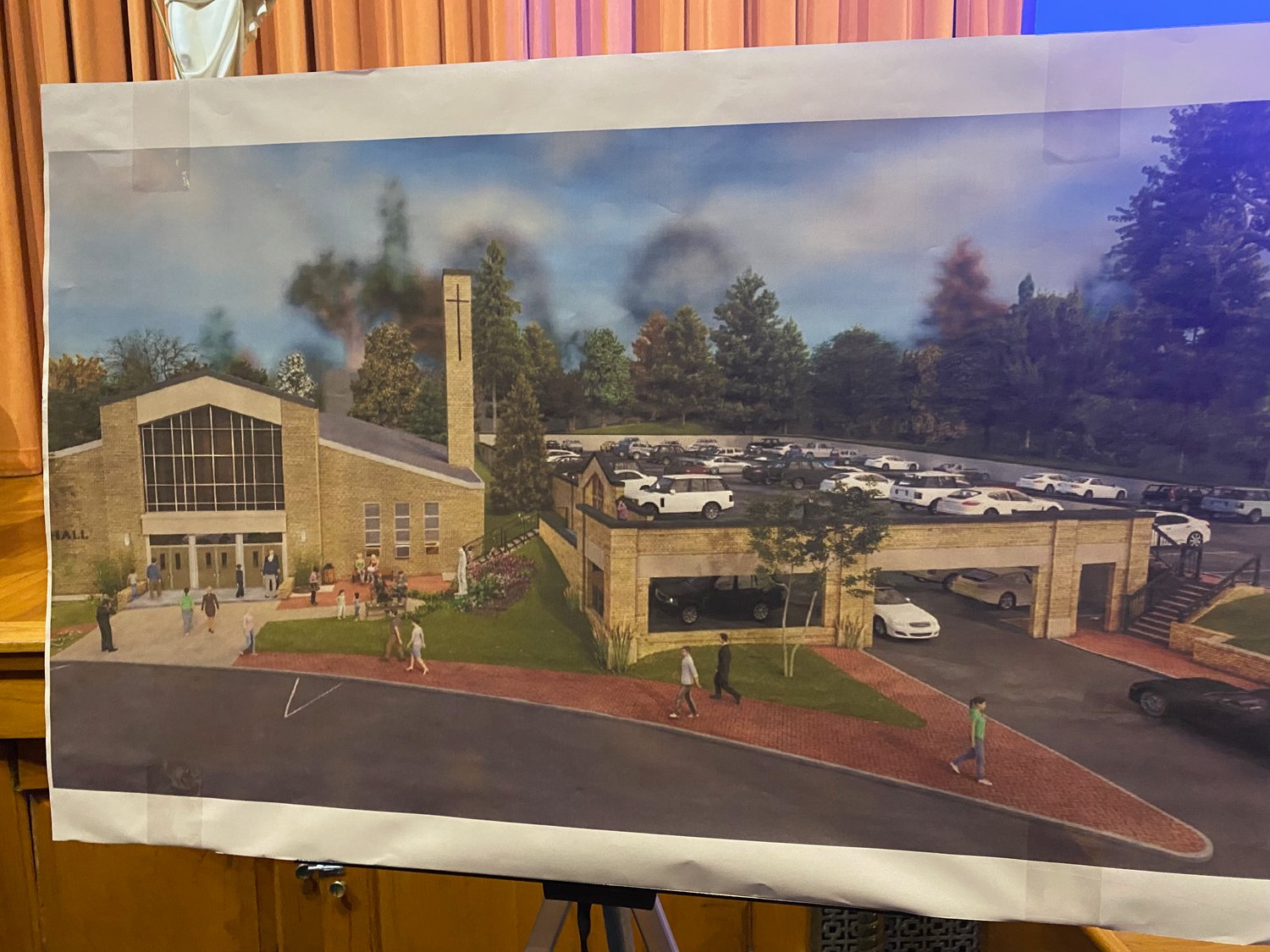 In the plans for St. Patrick’s renovations are the construction of a two-deck parking lot created adjacent to Romero Hall.
Letisha Dass/Herald
Previous Next
By Letisha Dass

St. Patrick’s Roman Catholic Church has accepted the purchase and development proposal from Mill Creek Residential, a leading developer, builder and investment management company in rental housing, to renovate the church’s campus. Rev. Dom Gabriel Rach shared the news with the parish and Glen Cove community during an informational session on May 13 at the church.

Included in the plans are the revamping of the church’s Romero Hall to accommodate special events such as weddings, the church’s October Fest, and the Hispanic services, which are primarily held at the parish hall. Along with the upgrade, the renovations would address infrastructural needs of the building such as heating, ventilation and air conditioning.

“I’m really excited to be able to repurpose this, spruce it up a little bit, and make it available for many more future parish events,” Rach said.

Instead of having the parking lot across the street from the church on Pearsall Avenue, a two-deck parking lot for roughly 200 cars would be built adjacent to the building, which would have access from the parish hall and eliminate the need for the driveway parking spaces.

As part of the plans, the church’s parking lot on Pearsall Avenue would be sold to Mill Creek, whose own proposal is to build 300 apartments on the property

There are mixed reviews surrounding the overall plans. Councilwoman Danielle Fugazy Scagliola, who is a parishioner of St. Patrick’s, doesn’t support it.

“It’s just grossly over developed,” Fugazy Scagliola said. “And I think as of right there, there’s about something like 14 homes, and they’re looking at over 300 units. It’s too much. That’s for sure.

Peter Luzynski, who is a parishioner of the church and lives in Glen Cove, said he is concerned.

“We have enough apartments,” Luzynski said. “What about the congestion going up and down the hill [of the church]. They better do a study [on] how it’s going to affect traffic. I see nothing but problems with that. I hate to see Glen Cove turn into Queens.”

But he agreed that the church needs to be rebuilt but he said it shouldn’t be at the expense of another apartment building which the city doesn’t need.

Koorosh Leibowitz, of Glen Cove, who was on the CDA last year, said that instead of apartments, there should be more support for businesses in the plans.

“Glen Cove doesn’t need more apartments,” Leibowitz said. “It needs to build infrastructure that will support economic development. This comes in the form of opening attractive businesses that will bring in investment and expenditure.”

In the plans, traffic to and from the campus and the parking lot would be limited to the main driveway for the church on Pearsall Avenue, Rach added, “but we’ll have to make sure that whatever we do, the traffic coming in and off campus goes smoothly.”

Much work is needed at St. Patrick’s campus, which was first built in 1856. Rach said the roof of the church needs to be repaired. The church tower, bell, and masonry, has concrete that is cracking and is susceptible to falling. For now, the church has placed bridgework below the tower for safety.

The school building, that has been closed since June 2019, has patchwork on the roof which needs replaced as does the heating systems.

“We’ve been lucky,” Rach said. “We’ve managed to kind of avoid some of the major damage.”

The convent, which has been closed and unused since 2019, has major damages, such as water recursions, potential mold, window plasters falling apart, and damage in the kitchen. In the plans, the church has the choice to demolish the convent or let it continue to fall into disrepair.

The church would need at least $3.3 million to address the renovations for the school, parish hall, church roof repairs, and the bell tower according to Rach, who received estimations in 2015 from Nicholson and Galloway Inc., a company that specializes in repair and restoration counseling.

“There are a lot of challenges,” Rach said. “We have to pick and choose where we apply a little bit of funds.”

Currently, the church does not have any funds or cash flow to address the issues. To acquire funds the church would need to sell the parking lot on Pearsall Avenue, which would help fund the project and leave savings for the church’s future.

“I intend this to be a future building activity, where we take the gains from this potential sale,” he said, “and we’ll use it to start something to quickly put the parish of St. Patrick on kind of a financial solid ground, not just for the short term, but also the medium term, [and] hopefully for the next 166 years.”

Mill Creek, the developer, would buy the property as well as handle the renovations for the church. Elisabetta Coschignano, an attorney, from Sahn Ward Braff Koblenz LLC, representing Mill Creek at the City Council meeting, said that the developer is waiting to present the proposal before the city’s planning board, which is required, and that the plan is in its initial planning phases.

“I can’t imagine the community would be very welcoming to this kind of overdevelopment,” Fugazy Scagliola said. “It’s too big. We can’t have any green space.”

A date has not been set for the hearing and Mayor Pamela Panzenbeck said that she isn’t sure when it will be.

“I do understand that church’s need for money,” Fugazy Scagliola said. “They have an asset that they can sell, and I get that they want to monetize that. All understandable, but it has to be something palatable.”

Angela Riccardi Jecklin, of Glen Cove, said that she would prefer to see more stores opened in the area instead of apartments, which would have very few units set aside for affordable housing.

“We need some brand name stores of our own like a mini Target or a Marshalls first,” Jecklin said. “There are nothing but pet stores and restaurants and supermarkets in Glen Cove.”

Michael Gary, a longtime resident of Glen Cove, said while people are assuming that only outsiders would be moving into the apartments, the proposal would provide housing options to locals who cannot afford to buy or rent a home. “Not to mention the elderly who may not want the burden of maintaining a home and yard,” he added. “Even if newcomers move in, this will only help local businesses because there will now be increased demand for their services.”

“I do not know what the future will bring,” Rach said. “But I do know that this is an opportunity that will allow us to make use of an asset we have to take care of ourselves.”