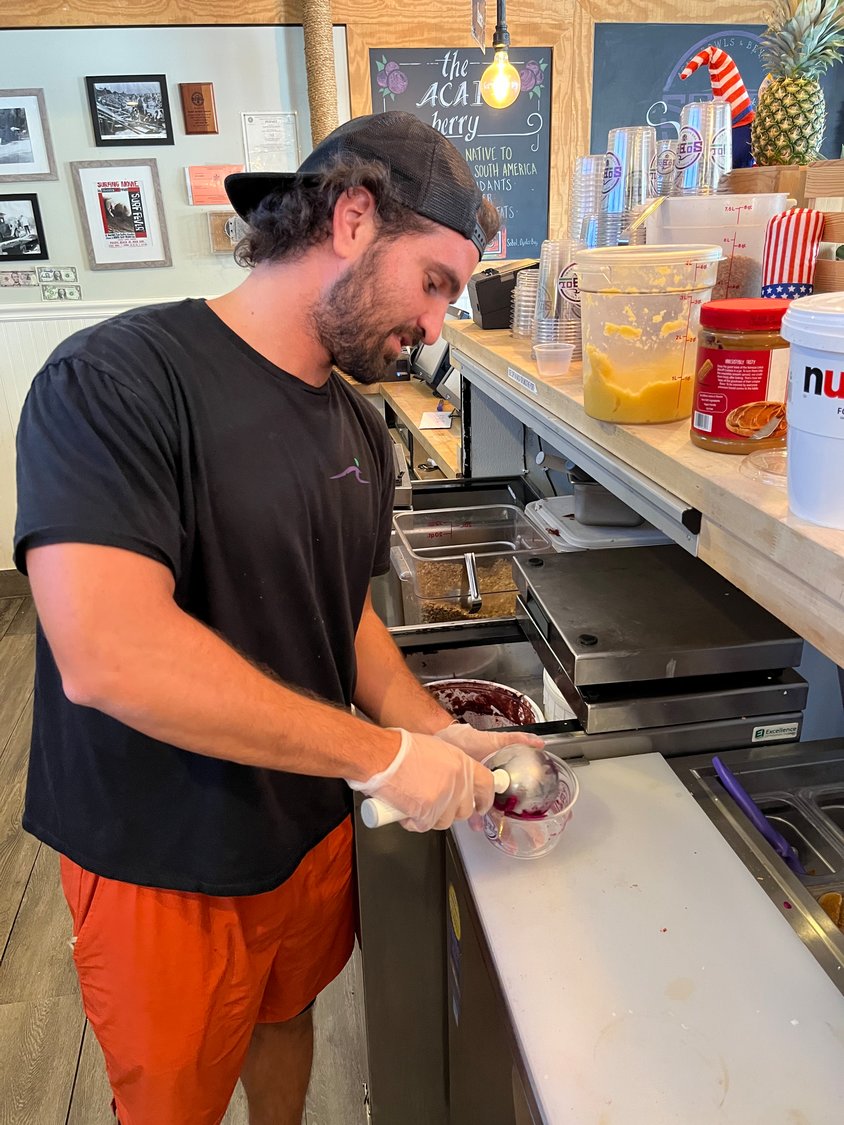 Philip Cesare said that despite the fact that he has owned SoBol for only six months, it’s been a pleasure to see the community flock to the store to escape the summer heat.
Will Sheeline/Herald 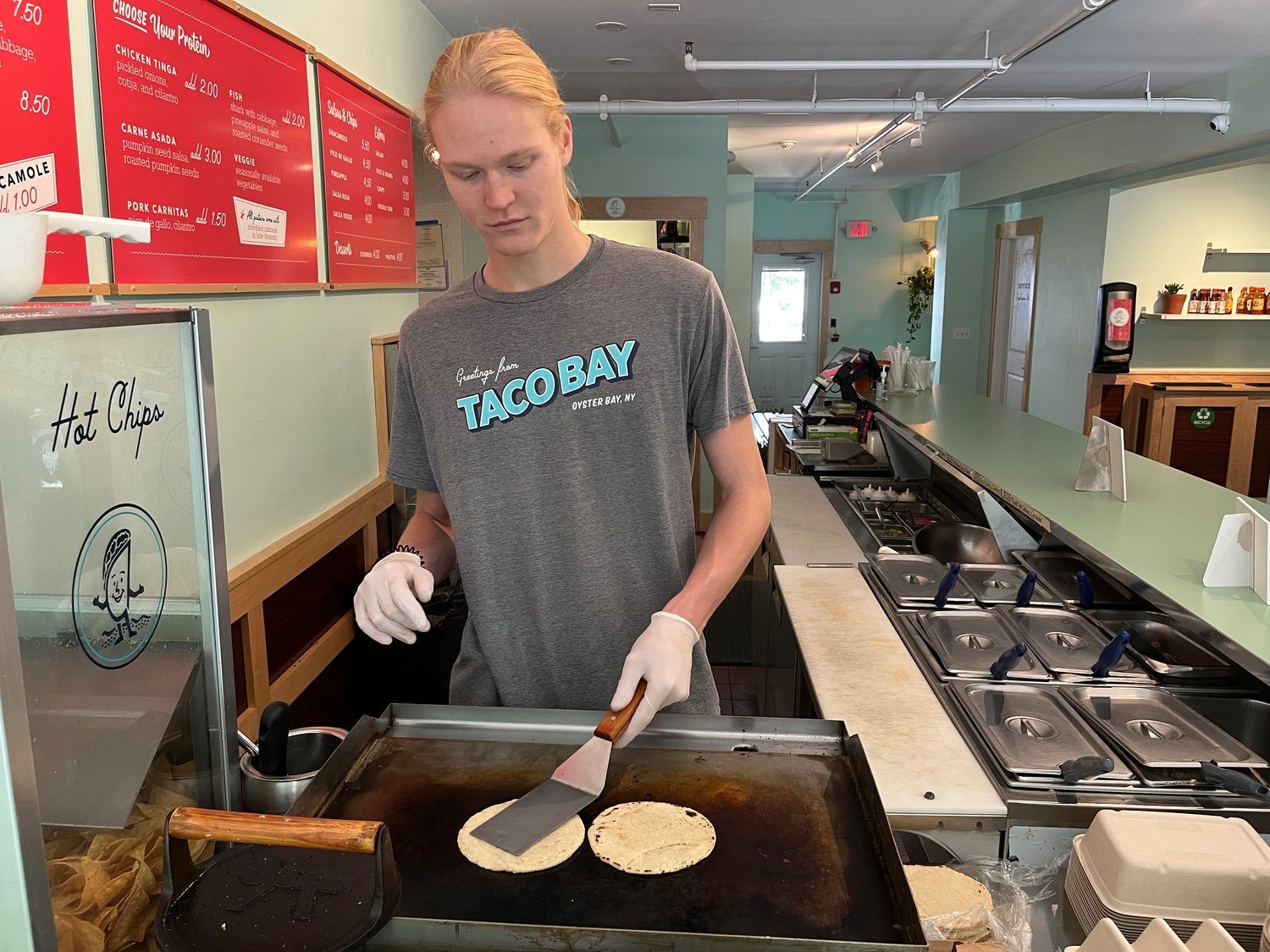 Jack Loud said he’s noticed how happy the community has been to be able to come back to Taco Bay without fear of catching Covid.
Will Sheeline/Herald
Previous Next

Of course there’s always worry, but I think we’ll be OK.”
Philip Cesare, owner, SoBol
By Will Sheeline

Covid-19 has made the last few years anything but normal, especially for local businesses.
The last three months have been the first somewhat normal summer since 2019. The Herald asked Oyster Bay business owners and their employees their thoughts on the state of business in the community.
Many say they are seeing more customers during the day. With roughly 78 percent of New York state residents fully vaccinated, people have become more comfortable, and even more excited, about going out on the town and shopping locally.
Some local businesses have suffered through a financial slump this summer, as many residents have left Long Island for vacations. Despite this, business owners and workers say this has been the first financially good summer in a long time.
Jack Loud, manager at Taco Bay, said that the Oyster Bay community embraced local businesses. This is Loud’s first summer as manager at Taco Bay, and he said he has been amazed at how business is thriving during a traditionally slow season.


“This summer was pretty good,” Loud said. “It was a little slow at times, but that’s normal. We got a ton of positive feedback. Everybody’s happy to be able to go to their local little taco spot again.”
Ravin Chetram, vice president of the Oyster Bay-East Norwich Chamber of Commerce, said that community members made an effort to ensure that the hamlet prospered financially. According to Chetram, before Covid, Oyster Bay was poised to come into its own from a business perspective, and he believes that it continues to do so.
“Despite the pandemic, people are coming in and are investing in our town,” Chetram said. “We’re going uphill in terms of opening new businesses. I’d say at least a dozen new businesses have opened up since the pandemic began winding down, which says a lot.”
Covid’s impact on the business community hasn’t been easy to forget. Eugenia Kontolios, a member of the Kontolios family, which runs Taby’s Burger House, said running a business during the darkest days of the pandemic was truly challenging. “It was really, really scary, to say the least,” Kontolios said.
“Thinking back on those years, it feels like a very distant nightmare.”
She was optimistic that this summer would mark a change of pace in local business. Kontolios said more people have been coming to Taby’s, including many new faces and bringing the 29-year-old burger house to a wider audience than ever before.
“It’s brought a lot of new people here too,” Kontolios continued. “I feel like people are more excited to do more things because of all those years we couldn’t do much, so it’s been better.”
In the past, Covid cases tended to increase in the fall as people spend more time inside and students return to school. This time around, businesses seem far less worried about a cut in their income. It may pose a concern, but it is one that they feel prepared for.
Philip Cesare, owner of SoBol in Oyster Bay, said that while Covid will likely always be a concern, he isn’t as worried about it. Cesare also owns a produce business in Floral Park, and mentioned that during the pandemic’s height that his business, like so many others, took a financial hit.
Cesare bought the SoBol store in February, and felt it was worth it to take a shot at running a new business in the hamlet. People have welcomed him with open arms, he said, and he and his team feel well-prepared for any Covid-related challenges that may lie ahead.
“At this point I feel like everyone’s pretty much either vaccinated or at least more aware of what’s going on, so as soon as cases go up, the masks may come back,” he said. “Of course there’s always worry, but I think we’ll be OK.”
Report an inappropriate comment